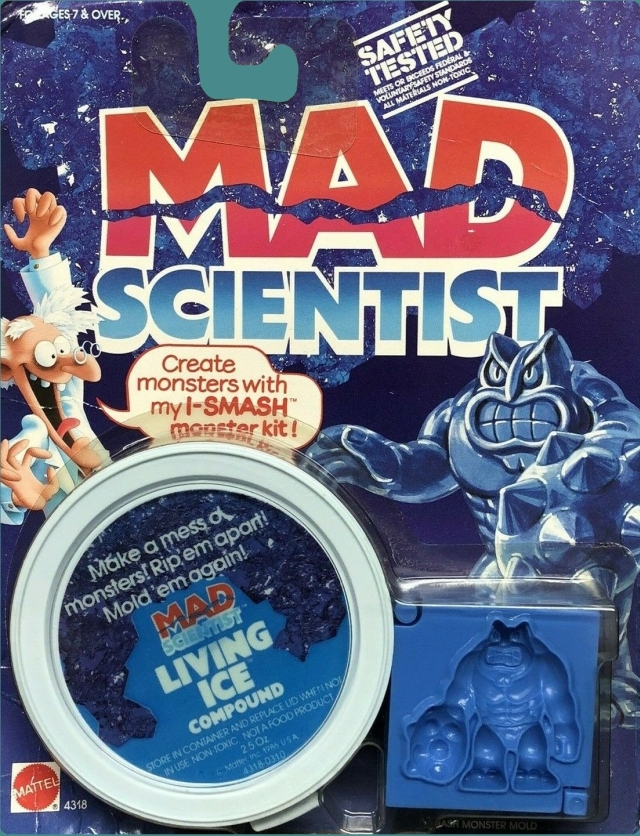 Mad Scientist: Living Ice Compound
Mattel (1986)
This was one of my favorite toy lines when I was growing up, and I was shocked to discover that it didn't even have its own page on Wikipedia.
There were a bunch of different kinds of toys, but they all had the same general theme of creating monsters.  Some of them were molds with a gelatinous compound, like this Living Ice set that I had when I was a kid.  Others included the skeleton of a monster that you would build the creature's body around, then drop it into a tank of liquid and watch the flesh dissolve off of its bones like acid.  Another one that I had when I was little was basically a stand that inflated a small balloon.  It came with a thick paint that you could use to turn the balloon into a monster's head, then either inflate the balloon to make the head larger or deflate it to watch your design contract into something that looked like a shrunken head.  It was pretty gruesome stuff, but for a kid that was obsessed with haunted houses and horror stories, they were perfect. 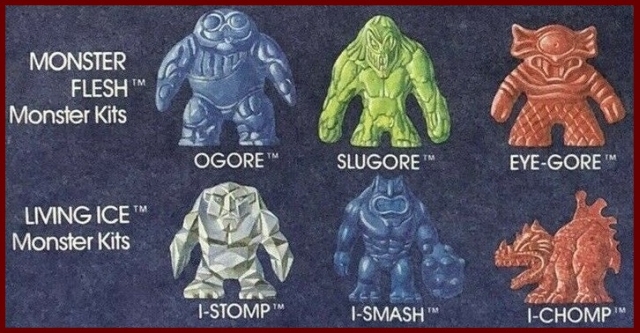 This is from the back of the package.  The Monster Flesh and Living Ice kits were basically the same product.  You would knead the goop in the tub, put it in the mold, and create a semi-solid monster that sort of felt like a sturdy Jell-O Jiggler.  It would stand on its own and it wouldn't fall apart on its own, but you could easily break it apart with your hands.
I think this toy line would have been better if it came with a plastic compound like Creepy Crawlers did so that kids could create a more permanent action figure with the molds.  If that were possible, I expect the creatures would have come out looking something like a toy from the Monsters In My Pocket line that was introduced by Matchbox a few years later.  Instead, the figures that were made from Mad Scientist kits were sort of like Play Doh - fun to play with in the moment, but destroyed before the end of the day.  That might explain why the toy line itself has been largely forgotten.