Sometimes, The Beast Does Include Selling Out 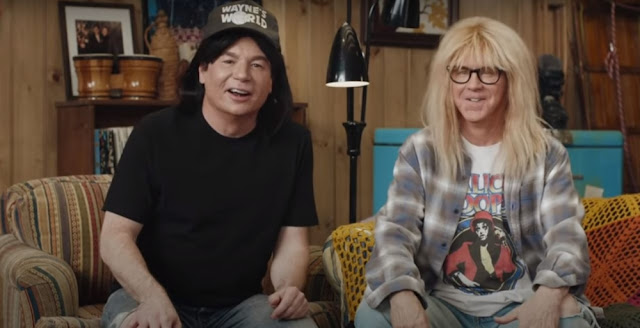 Uber Eats Wayne's World commercial
Super Bowl LV (2021)
Wayne Campbell and Garth Algar are back, and they're helping to draw attention to restaurants around the country who have partnered with Uber Eats.  The standard commercial will air during Super Bowl LV, but there is also long version of the ad on YouTube.  It's a really long version.  It's over two and a half hours long, and it scrolls through over 89,000 restaurants throughout the United States whose food can be ordered through the mobile app.

Naturally, I had to fast forward to see which Hazleton restaurants are represented.  Just past the two hour and one minute mark, there are three restaurants that I'm familiar with: Booty's Place (in the Church Hill Mall), Bottlenecks (in West Hazleton - excellent wings), and Vesuvio's Pizza (on Wyoming Street).  I've never eaten at El Panchito or the Fireside Lounge before.  I'll have to give them a try sometime soon.