Quite Possibly The Coolest Human Being Who Ever Lived

Richard Garriott
Origin Systems / Destination Games
With the exception of playing games like Shanghai, Wheel of Fortune and Police Quest on my grandmother's Tandy, I wasn't much of a PC gamer in the 80's.  However, even though I never played any of the games from his Ultima series, I knew who Richard Garriott was.  Anyone who played video games in the 20th century has heard of him, or at least saw photos of his alter-ego Lord British in gaming magazines.
What I didn't realize until recently is that this guy's fictional personality pales in comparison to his actual life.  He is the only human being in history to have traveled to both the North and South Pole, to outer space, and to the deepest trench in the ocean.
I found out about this on Monday while listening to the Retro Warriors podcast.  At first, I thought they were kidding, but it's true.  In October 2008, the game developer flew on the Soyuz TMA-13 mission to the International Space Station, and last month, he took a seven mile journey to the Mariana Trench at the bottom of the Pacific Ocean.  This most recent journey prompted one of the most entertaining magazine headlines I have ever seen. 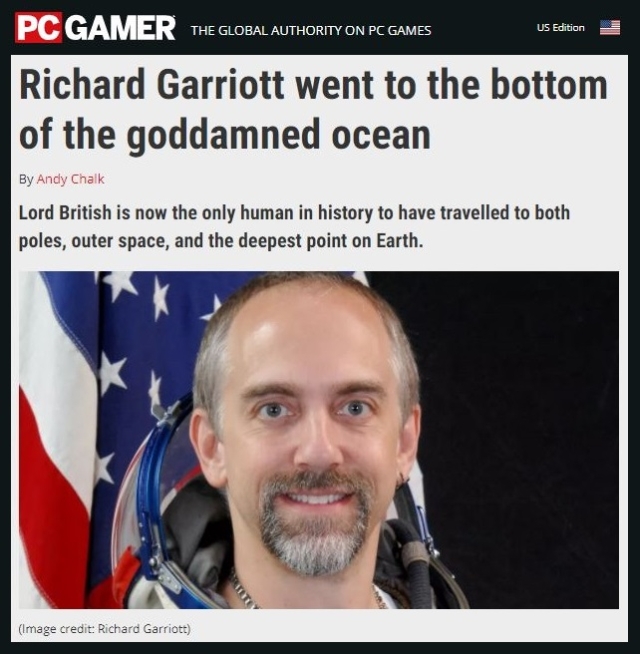 The more I read about this man, the more I am convinced that he just may be the most badass human being who ever walked the face of the earth.  If there are any other contenders, I can't think of who they could be.