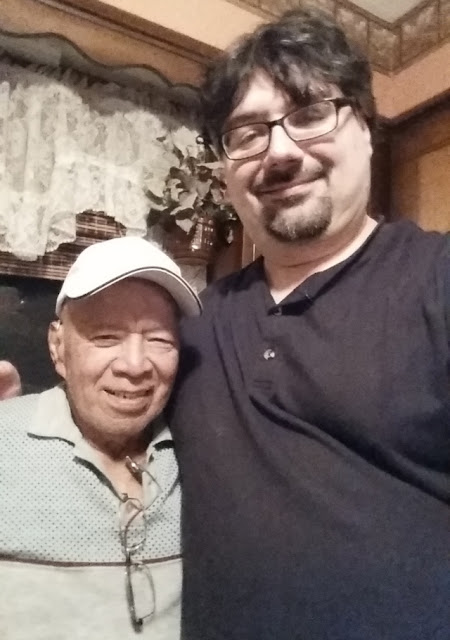 This photo was taken at my mothers house on Thanksgiving 2016.  The dude in the white hat on the left is the man that I've called Pop Pop throughout my life.  I was named after him (my middle name), and like all of my cousins on my mothers side, I was given a second Hawaiian middle name.  It's Manukai.  It means "breeze from the ocean".
When I was seven years old, I spent a month in Hawaii with my mother, my Mom Mom and my Pop Pop (I had my 8th birthday on Oahu).  While we were there, I was introduced to dozens of aunts, uncles and cousins that I never met before.  He also taught me a lot about my Hawaiian heritage.  Soon afterward, he gave me a home with three square meals and a safe place to sleep when my mother and her new husband decided I was too much to handle.
When I was 11 years old, I moved to Florida to live with my Dad and I drifted away from my mother's side of the family.  That distance only grew wider with time for many reasons, not the least of which is our differing values when it comes to bigotry, social justice, and... well... everything.  The election of Trump pretty much broke my branch off of their family tree altogether.  However, despite all of the arguments and disagreements I've had with him, I never doubted for a second that he loved me.  Until very recently, I also never doubted that he was my grandfather.
Then, along came the Ancestry.com DNA test. 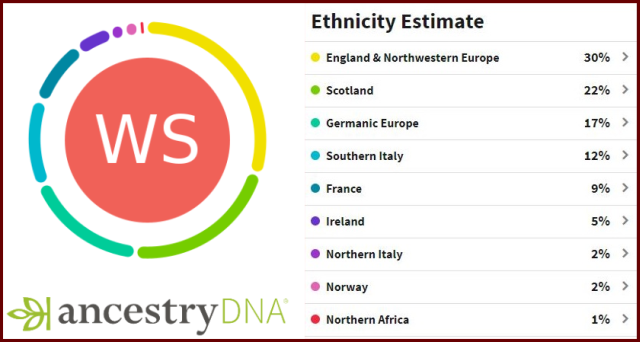 So, as you might have guessed by now, my grandfather is Hawaiian.  Actually, he's half Hawaiian and half Chinese.  His father emigrated from Canton to the islands when he was a young man.  He opened a restaurant, met his wife, and had a family.  Pop Pop was his youngest son.
My ethnicity is a bit more complicated.  I have always been told that I am a "Heinz 57" because each of my grandparents have ancestors that came from somewhere else: My paternal grandfather was German and English, my paternal grandmother was Italian and Tyrolean and my maternal grandmother was Irish.  All three of them have passed away.  The only one of my grandparents who is still alive is Pop Pop.
When I first looked at this ethnicity estimate, I didn't pay very close attention to it.  Sure, it seemed odd that there it doesn't show Polynesian or Chinese, but it's only an estimate, right?  After all, it's also saying that I have a bit of Northern African, Norwegian and French heritage, and I can't think of anyone in my family who might be any of those.  The 22% Scottish jumped out at me too.  To the best of my knowledge, there is no one of Scottish ancestry in my family, but according to my DNA, it's the second highest part of my ethnicity.
Then, I noticed the section where my DNA is compared to other family members who have also taken the Ancestry.com DNA test. 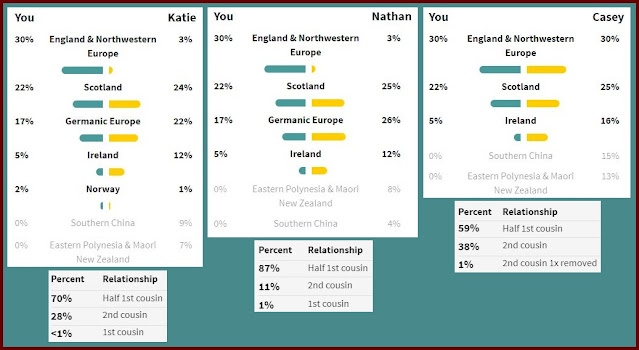 Katie, Nathan and Casey are three of my cousins.  Up until I first looked at these results, I had always figured that they were my first cousins.  After all, their father is my uncle - my mother's brother.  We have the same grandparents.  Therefore, they're my first cousins, right?  Not according to our DNA, they're not.
While I recognize that these are estimates and not an exact science, this isn't just one person.  It's three people.  In each case, the highest likelihood of our familiar relationship is "Half 1st Cousin", which would mean that we share one grandparent.  Also, all three of them have evidence of Polynesian and Southern Chinese ethnicity in their DNA.  With me - zip, zilch, nada.  I have one percent of Northern African heritage, but not a drop of Hawaiian or Chinese.  I don't know if this is evidence that would stand up in a court of law, but the picture that this paints is pretty clear.  My cousins and I have the same grandmother, who ancestry appears to be both Irish and Scottish.
I had a second test done with 23 And Me just to get a second opinion.  The results are supposed to come back later this month.  Who knows, maybe the folks at Ancestry.com accidentally spilled my Hawaiian Chinese DNA into the hand-washing sink.  It doesn't seem likely, but I suppose it's possible.  However, if this comes back with similar results, this means that, in all likelihood...
And what the hell do I do about any of this?  Well, you're looking at it.
I certainly can't tell Pop Pop, or my mother or anyone on that side of my family.  My mother is ridiculously close to her father, and I don't think it's a great idea to start making accusations about my dead grandmother to a side of the family that I am already the blacksheep of.  Incidentally, there is zero chance that any of them find my blog.  Hell, if they haven't found it in twenty years, they're not going to suddenly stumble on it today, and I guarantee you that none of them, including my mother, cares enough to Google me.
I don't really have any close friends to talk with about this.  One of my many lovely qualities is that I have a remarkable talent for pushing people away no matter how hard they try to be good to me, and by the time I stop being a jerk and overthinking everything, they're long gone.  Hell, even the casual friends and work acquaintances I've made over the years are all gone since I got rid of social media a few years ago.  I really am a piece of garbage, aren't I?
I tried telling my dad about this, but he's not super comfortable talking about my mother's side of the family.  It was a pretty crazy time in his life, and it ended about 35 years ago, so I guess I understand that.  The reaction from my wife was similar, but for different reasons.  She knows Pop Pop and likes him quite a bit.  I do too.  I may not be close with him anymore (see the above paragraph), but I love him.  I know in my heart that this doesn't really change anything.  He's been my grandfather for my entire life, and he'll always be my grandfather.
The other question this all leaves behind isn't quite as clear.  Who am I?  Before all of this, if I were filling out a bio or introducing myself in the asinine and awkward way that I have, that's always a part of it.  Hey folks, I'm Hawaiian and Italian!  I may be an absolute asshole that you'll want to strangle after a few weeks of knowing me, but check out this cool little fact about me!  All sarcasm aside, it was a part of my heritage that I very strongly identified with for many years.  As a kid, I learned everything I could about Hawaii.  I read books.  I watched movies.  I learned some of the language (and forgot most of it).  I cheered my ass off for Shane Victorino when he played for the Phillies.  Check out our center fielder, The Flyin' Hawaiian!  Hell, I even make excuses for why Spam is a perfectly acceptable side dish with breakfast.  There's not a whole hell of a lot about me that's special, but I always had that.  No matter how low I've ever felt, that was the one thing that this world couldn't take away from me.  Well, guess what... it did.  And as usual, it's my fault.
If only I hadn't gotten that damn test.