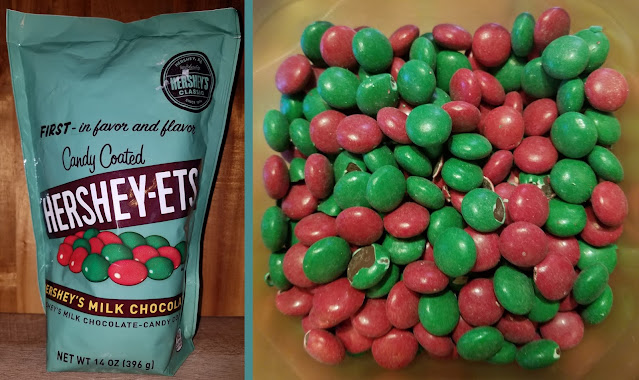 Hershey-Ets
Hershey (2021)
For years, my father has been telling me about the time when he was a kid when Hershey made their own version of M&M's.  I don't know how it keeps coming up in conversation.  I'd like to say that it's because I worked for a major candy company for the better part of a decade, but he has talked about these for many years prior to that, and he continues to talk about them to this day after my former employer sold off their American candy business.  So, imagine my surprise to find a big bag of Hershey-Ets at Ollies, in retro styled packaging, no less!  I had to pick them up for him.
Now, my pop has had type 2 diabetes since he was 30, and he has been eating and drinking with reckless abandon for his entire life.  The drinking hasn't slowed down much, but he is starting to watch what he eats a little bit.  He said that these would be good to have around the house for when his blood sugar crashes.  Then, he proceeded to remove every last Hershey-ets with a crack in its candy shell and eat them.  I think pop might have a touch of OCD.
As for the candy, they taste exactly like you probably expect they would, which is to say they're M&M's.  Maybe somewhere out there is someone with such a refined pallet for chocolate in a candy shell that they can tell the difference between the two, but that somebody isn't me.  However, it was still worth the purchase for the glee in my father's eyes as he shouted "I told you so", as if I was on the other side of this debate.