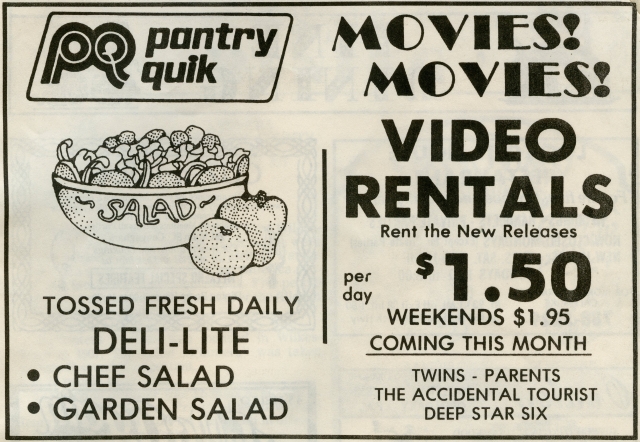 When I was in third grade, I lived in an apartment on First Street in Hazleton with my mother.  There was a Pantry Quik practically in our back yard, and I used to stop in pretty much every day for Senape's Pitza, a Farmer's Tea, a pack of baseball cards, a Slim Jim, a box of Nerds, a hoagie or a salad.  The salads there actually were pretty awesome.
All of the Pantry Quik's in town had a few shelves of movies on tape that you could rent.  The selection wasn't huge, but they had a lot of horror movies and comedies.  They kept renting out movies through the 80's, 90's and into the early 2000's, but they didn't really update their stock too much after the mid 90's.  The final years of PQ Video were like a movie time capsule with shelves of sunbleached VHS tape boxes for the Police Academy and Nightmare on Elm Street movies.