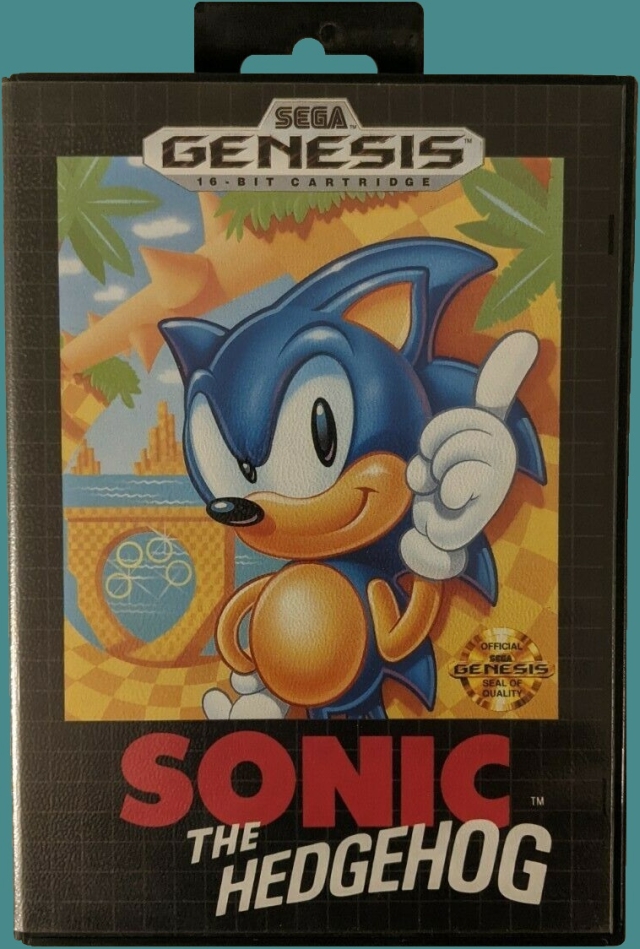 Sonic The Hedgehog
Sega Genesis (1991)
Although I'm sure some might disagree with this opinion, I feel that Sonic The Hedgehog is the game that launched the 16-bit era of gaming in the United States.  The Sega Genesis was available in stores for nearly two years before Sonic was introduced on June 23, 1991.  However, prior to Sonic, I didn't know a single kid who owned a Genesis.  We had all heard about it from game magazines and from their "Genesis Does What Ninten-don't" commercials, but it wasn't a topic of conversation on the playground.  The Super Famicom had been available in Japan for about half a year at this point, but for kids in America, the only exposure we had to Super NES at the time was pictures in Nintendo Power.  Nintendo's 16-bit console didn't make it to the United States until two months after Sonic debuted.  The era of 16-bit gaming just wasn't on our radar too much in 1990 and the first half of 1991.  We were all still obsessed with Super Mario Bros 3 and rediscovering our NES library with all of the new features we could unlock using the Game Genie.  Sonic The Hedgehog single-handedly changed all of that.
In the summer of 1991, Sega made the bold decision to replace Altered Beast with Sonic The Hedgehog as the pack-in title with new Genesis consoles.  When I learned about this, I decided that baseball cards were going to be put on hold for a little while.  I began saving every penny I could get my hands on to buy a Genesis.  Whether it was a few bucks in a birthday card, or the loose change that I was allowed to keep if I ran to the store to pick something up for my family, or even if I found a quarter on the ground, it went into a white envelope that sat on a bookshelf in my bedroom.  Christmas cards from aunts and uncles with a few bucks tucked inside got me pretty close, and the following Spring, I had finally reached my goal and was able to buy a Sega Genesis.  I was eleven years old and it was the first time I ever used my own money to buy a video game console.  It may have been the most satisfying experience in my life up to that point. 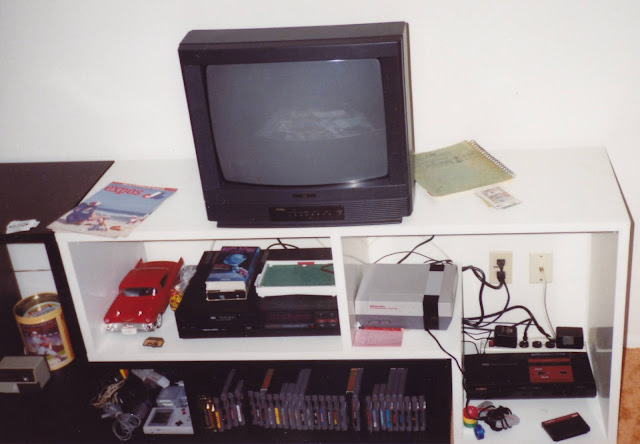 My dad, stepmom, stepsister and I had just moved to our new house in Boynton Beach a couple of months earlier.  Dad bought me a white and black shelving unit for my bedroom.  It had two pieces, and they fit together like two L-shaped Tetris blocks.  I remember spending forever trying to rearrange things to make room for the Genesis in the days before Dad and I went to the store to pick it up.  I couldn't find a photo of this setup after I had the Genesis, but I remember I decided to stick it on top of the VCR so that the controller wire could stretch out and reach the bed.

From the second I turned it on and heard the game sing out the word "Seee-gaaaaa", my mind was absolutely blown.  No game I had ever played before was this bright, this colorful and this fast.  I suppose it's hard to appreciate the difference between 8-bit and 16-bit graphics unless you grew up with one and transitioned to the other, but to the sixth grade me, it was a massive change.
In the years that followed, my library of Genesis games grew.  Some of my best memories of living in Florida are of my dad and I playing Sportstalk Baseball and NBA Jam on the weekend, but I always came back to play the original Sonic The Hedgehog time and time again.  I still play it to this day, and it never fails to put a smile on my face.