It Can't Rain All The Time 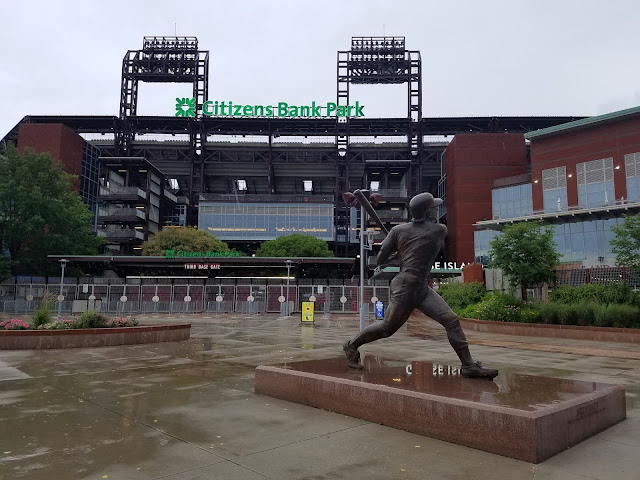 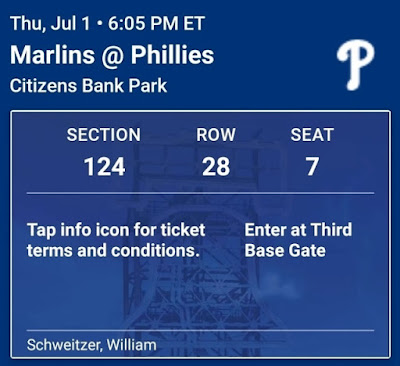 Well, I suppose it had to happen eventually.  After a streak of nearly 100 games without a rainout dating back to 1992, this is the first regular season MLB game that I had tickets to that was postponed due to the weather.  It's a bummer.  This was my birthday game, and I was especially looking forward to it since the stadiums were closed to fans last year due to the pandemic.  I have no reason to complain though.  Life has been far better to me than I deserve, and if the worst thing that happens to me this year is a rained out ballgame, it's been a damn good year. 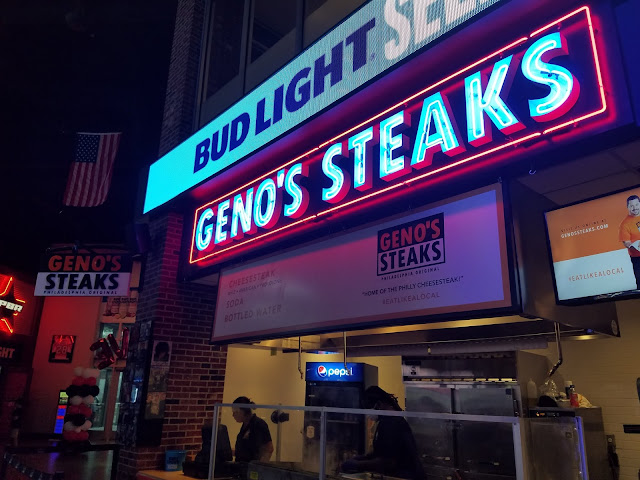 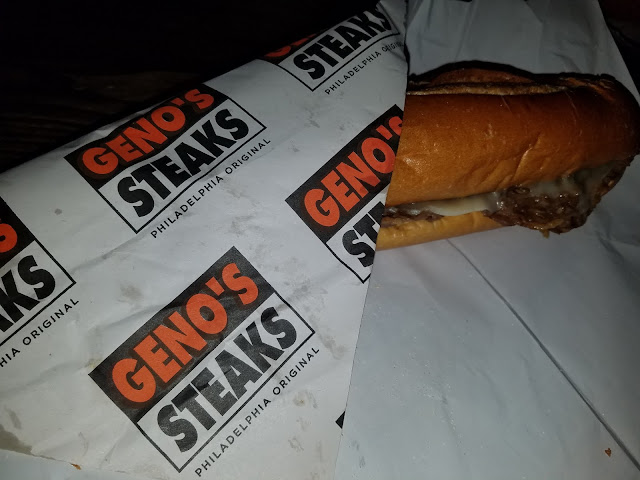 We got to the ballpark right around the time that the gates were supposed to open, but they were still closed up.  The guy behind the gates said that they were still waiting to get the final word on whether they were going to have a rain delay or postpone the game altogether.  Rather than stand out in the rain getting wet, we went across the street to the Xfinity Live building and got a couple of cheesesteaks from Geno's.  Before I even got back to the table, the announcement was made that the game was being postponed because they were calling for the rain to continue, and to develop into severe thunderstorms, straight through until 3:00 am.
They announced that the game would be made up as a single-admission double header on Friday, July 16th, which works out absolutely perfect.  Friday is the only day of the Joe Bob Jamboree that I don't have tickets for.  That night is mostly geared toward independent filmmakers with booths set up for folks to learn tips and tricks from folks who have worked in the industry.  It sounds very cool, but when it comes to movies, my place is in the audience, and with tickets in such high demand, I would only have been taking up a spot for someone who would have gotten more out of it than me.  It did end up selling out in a matter of hours, so I have no regrets.  I'll be at the Jamboree on Thursday, Saturday and Sunday, and now I have a double header in Philly for Friday.  It's going to be a busy weekend and I'm sure I'll be half dead by Monday, but it's also going to be a hell of a lot of fun! 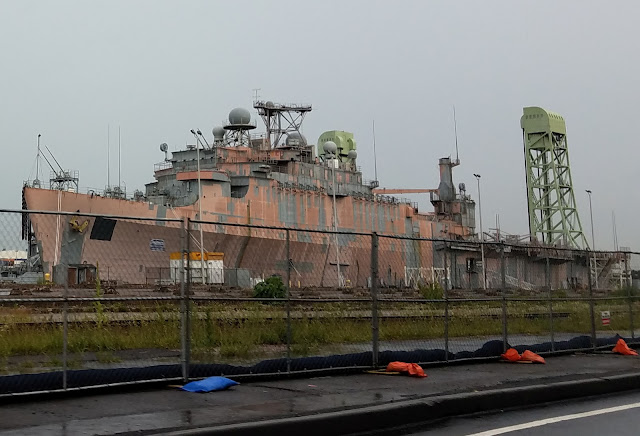 The Schuylkill Expressway was at a standstill (surprise, surprise), so we took a slight detour through Philly on the way home.  It took us past the Philly Shipyard and the old Philadelphia Naval Shipyard.  I've only seen this from a distance, so it was pretty cool to get to see it up close.  We didn't stop because it was raining and we wanted to get to the Turnpike before it got too heavy, but I got this photo through the window.  My grandfather would have gotten a kick out of this. 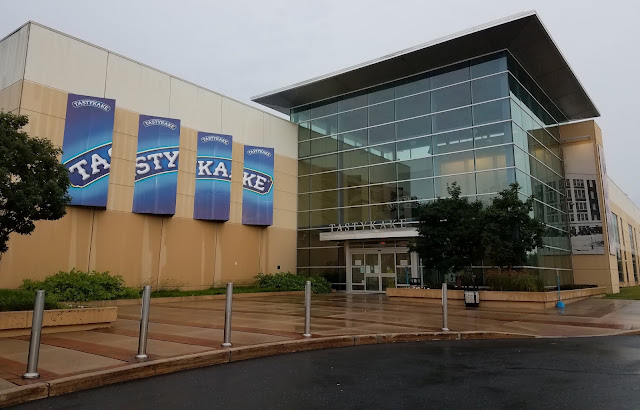 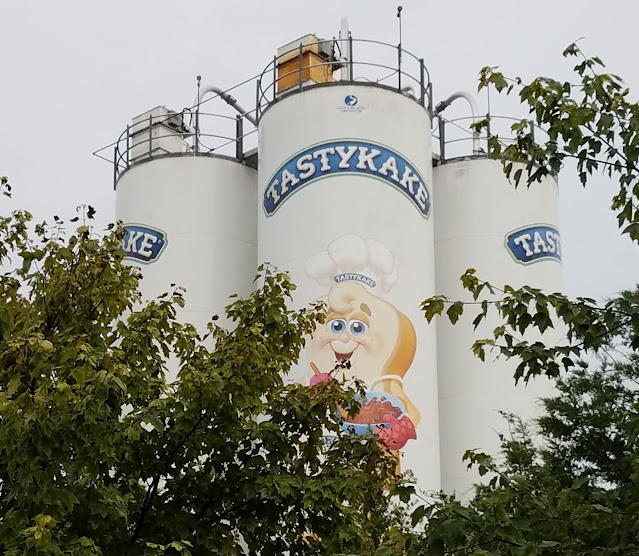 We also passed by the Tastykake headquarters.  I pulled into the parking lot to take a few pictures because I'm a great big nerd who loves Tastykakes.  From what I saw through the front window, it looks like they have a museum and public tours in this building.  I'll have to check it out one of these days. 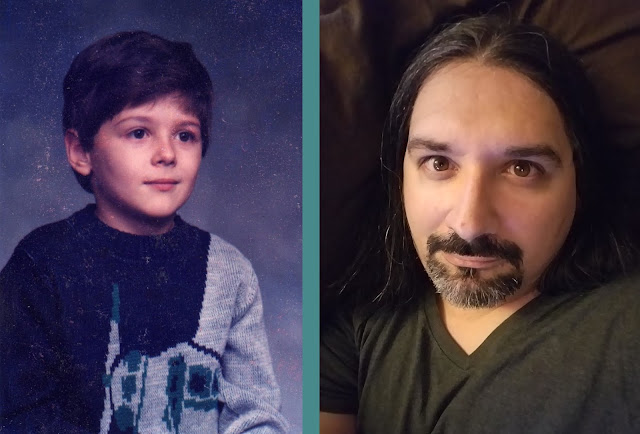 So yeah, somehow this screwed up kid from West Hazleton managed to survive until his 41st birthday.  Not only that, but he managed to get there without turning into a drunk or a drug addict or ending up in jail.  I don't think too many of my high school teachers would have put money on that outcome, but here I am.  It's been a pretty rocky road some of the time over the past four decades, and I'll be the first to admit that I'm the farthest thing from perfect that a man can be, but I think I can look myself in the mirror and know that I'm not too bad.  I've screwed up more times than I can count, but I know that I have a good heart and that I at least try to be a good person, even when the choices I make aren't so good.
One thing I can definitely attest to is the fact that time flies.  My grandparents used to always say that to me - how fast time goes when you start to get older, and how ten years, or even twenty years can pass without you even realizing how long it has been.  I used to think it was all bullshit when I was 21.  Ten years later, I was 31 and I started to feel it a little, but not really.  Now I am 41 and... holy crap.  I swear, the last five years feel like they lasted five months.  It's crazy how your brain changes the way that it processes time and distance as you get older.  I can only imagine how fast this will all seem when I'm in my 50's, if I'm fortunate enough to cross that milestone.  I'm really trying hard to not think that far ahead, especially when I think of my Dad, who has just retired, and my little dog, who has gone from being a puppy to a ten year old dog in what feels like the blink of an eye.  That's one of the reasons I try to go on as many adventures as I can.  I'm not a rich or successful man - never will be - but I'm fortunate enough to be secure and to have enough left over after the bills are paid to do a little exploring.  All of it can change in the time it takes to snap your fingers, because tomorrow isn't promised to anyone.  So, if you're reading this and you're bored or depressed or in a rut, please try your very best to get out there.  It doesn't have to be anything crazy, or expensive, or far away.  Whatever you're passionate about; whatever brings a smile to your face, go out there and experience as much of it as you can while you can.  Go alone.  Go with someone special.  Go with a group.  Whatever suits you best.  Just... go.