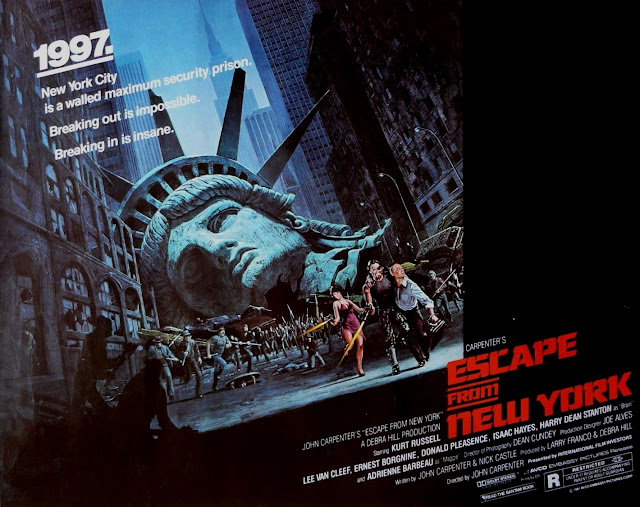 Escape From New York
Embassy Pictures (1981)
John Carpenter's fifth motion picture, and one of my favorite dystopian future movies of all time debuted in theaters 40 years ago tomorrow.  The film is set in the far off year of 1997 in a world in which the United States turned Manhattan into a giant maximum security prison 9 years earlier.  Air Force One has crash landed onto the island, and the President of the United States (played by Donald Pleasence) has been kidnapped by the prison's crime boss, The Duke of New York (played by Isaac Hayes).  A criminal and veteran of World War III named Snake Plissken (played by Kurt Russell) has been forced by the government to infiltrate New York and rescue the president.
I saw this movie for the first time when I rented it from Blockbuster as a teenager.  The sequel, Escape From LA, was about to hit theaters, so I wanted to see the original before seeing the new film.  From the opening credits, I was hooked.  The score that introduces you to this film is captivating - second only to another John Carpenter film, Halloween.  If you've not seen it before, it's available to stream on HBO Max.  Go ahead and pop some popcorn, turn off the lights, and prepare to enter a twisted world that you won't forget.