Kit Kat: Limited Edition Apple Pie and Key Lime Pie
Hershey (2021)
Most Americans don't realize that Kit Kat is actually owned by Nestle.  If you go anywhere outside of the United States and buy a Kit Kat, you'll see a Nestle logo on the package.  It's only made and sold by Hershey in America because of a contract that they had with Rowntree's, who invented the Kit Kat bar, before Nestle purchased the company.
One of my favorite parts of the job when I was the customer service trainer for Nestle was going over the crazy flavors of Kit Kat that are available in Japan that we sometimes get asked about by consumers.  They've got hundreds of different kinds over there.  Some of them are what we think of as traditional dessert flavors, like apple, blueberry cheesecake and cherry.  Others are things that typically aren't seen as snacks here in the US, such as baked potato, roasted corn, wasabi, soy sauce, and butter.  They even have one that's supposed to taste like a cough drop.
Until recently, Hershey didn't get too creative with the Kit Kat line.  Most of the products they made that strayed from the standard Kit Kat bar were just different shapes and sizes, but in the past couple of years, they've started making some interesting flavors.  They haven't crossed over into baked potato territory yet, but you can't go wrong with candy bars that taste like pie.  I found these at a Wal-Mart in New Jersey next to Grounds For Sculpture a couple of weeks ago, and diet or no diet, I wanted to try 'em before they stopped making them. 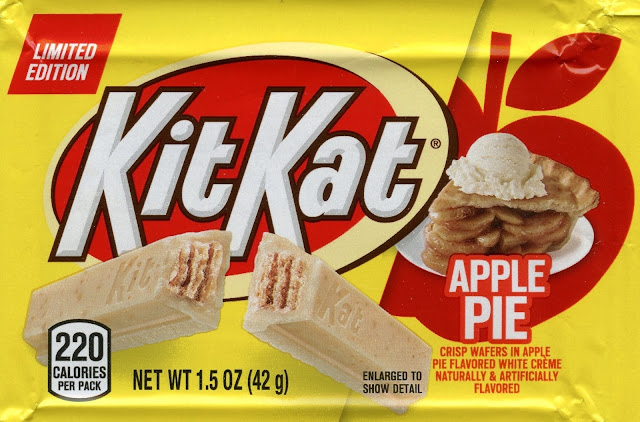 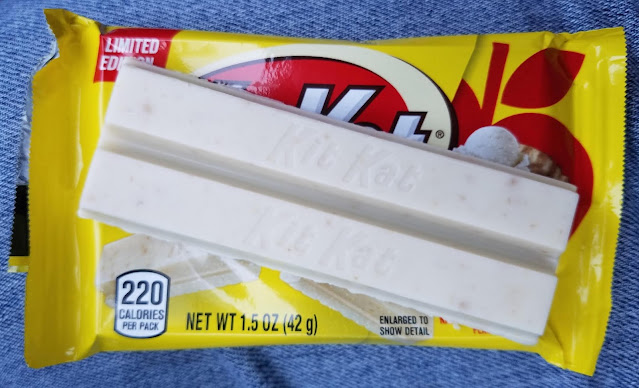 The Apple Pie Kit Kat really does taste like apple pie.  It has a creamy apple cinnamon flavor that is very tasty in Kit Kat form.  I'm not sure if it would work as well as a solid candy, like a Hershey Kiss, but the crunchy texture makes it work. 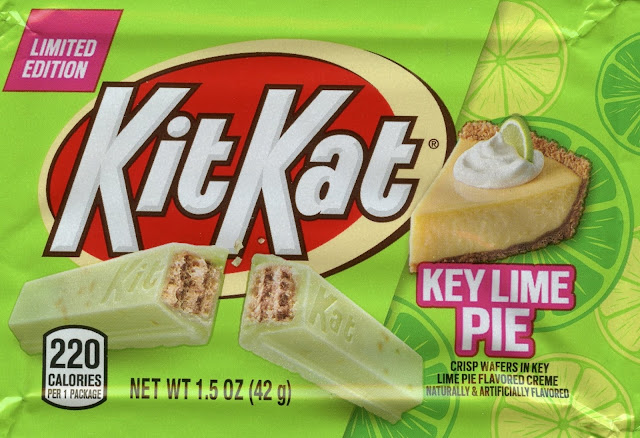 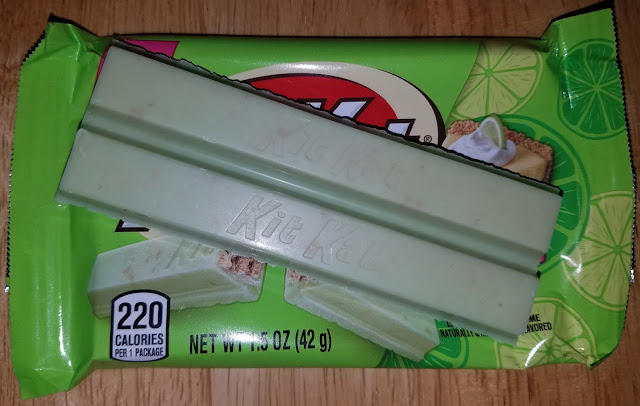 The Key Lime Pie Kit Kat is even better, in my opinion.  One of the things that make these so great is the fact that they didn't just make them taste like fruit - they taste like the actual fruit pie.  You can even taste the graham cracker crust in these.  The folks who were in charge of this project really put in a lot of effort and it shows.
I'm not sure how long the limited edition period is for either of these, but they've already been out for a little while, so I wouldn't wait too long if you want to try them.