Babysitting On Friday The 13th 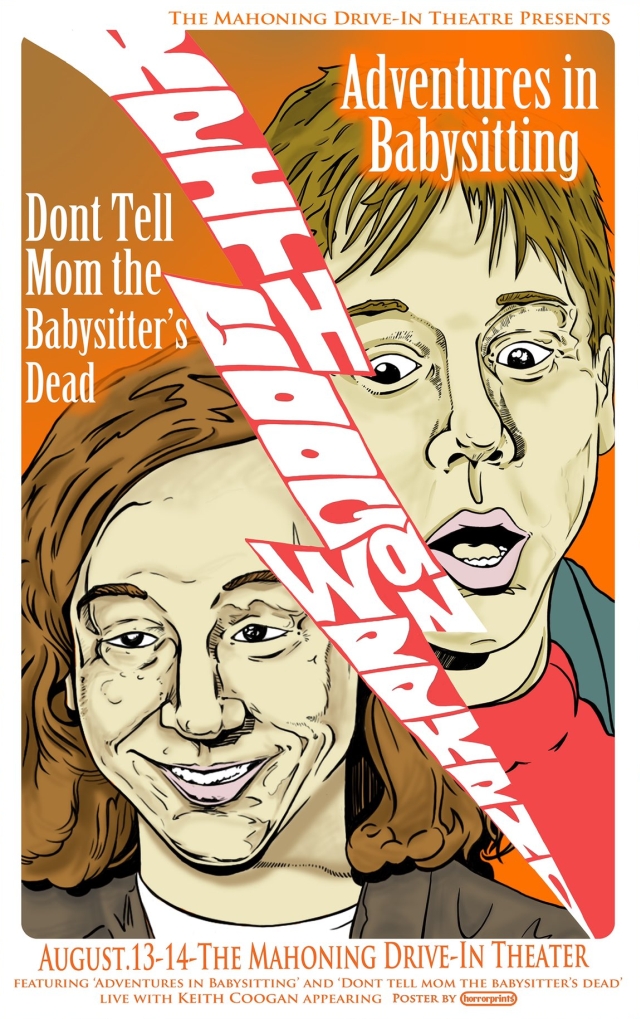 Adventures In Babysitting / Don't Tell Mom The Babysitter's Dead
Mahoning Drive-In - Lehighton, PA
The folks at the Mahoning Drive-In like to plan double features of movies that have a common theme.  For example, they had Bite Night back in 2016 when they screened Jurassic Park and Jaws - two movies about big creatures that want to eat you.  In 2017, they had Too Cool For School weekend featuring Ferris Bueller's Day Off and Summer School.  In 2018, there was Home Run Weekend with A League Of Their Own and The Bad News Bears.  Last year, they had a Medieval Night with Robin Hood: Prince Of Thieves and Monty Python & The Holy Grail.
They have way more than one of these per year, but you get the idea.  However, we saw a double feature last night that I never could have predicted if you gave me a thousand guesses: "Comedies About Babysitting Featuring Keith Coogan on original 35mm prints", with the man himself in attendance to meet the fans. 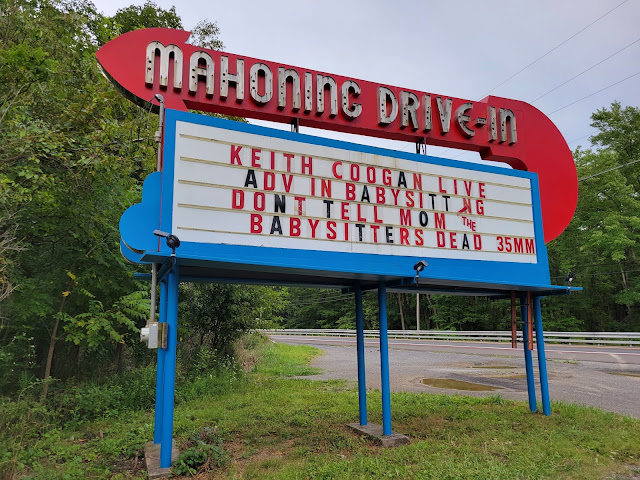 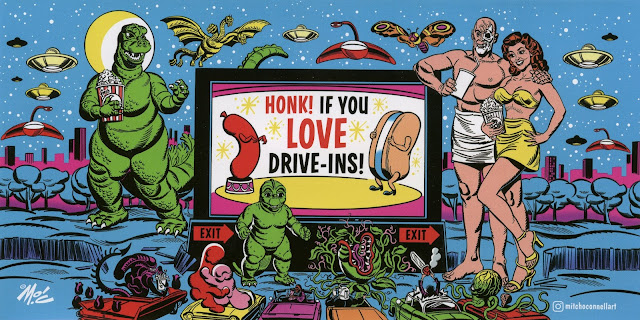 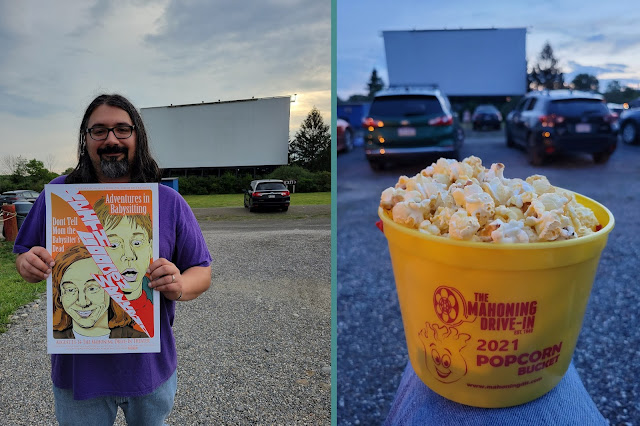 The autographs and selfies were a little out of my budget, but I did pick up the show poster with artwork by Charles Moran of Horror Prints.  They also gave us an awesome bumper sticker with artwork by Mitch O'Connell at the gates.  And what is a double feature under the moon and the stars without a fresh bowl of popcorn? 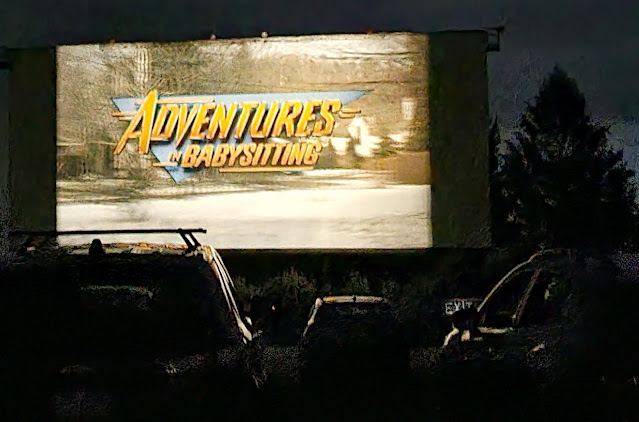 The free bumper sticker wasn't the only surprise at last night's double feature.  Before each movie, the Mahoning aired a 35mm cartoon.  The first one was a 1995 Mickey Mouse cartoon called Runaway Brain that originally aired in theaters before A King In King Arthur's Court.
The first movie of the night was a 1987 teen comedy that was the great Chris Columbus' directorial debut - Adventures In Babysitting.  I've only seen this movie once in my life and it was a long time ago, so I didn't remember too much about it.  It stars Elisabeth Shue as Chris Parker, a high school senior who gets stood up on a date.  She ends up babysitting an 8 year old girl instead, and things don't go quite as planned.  Shue is probably best known as Ali Mills in The Karate Kid and Jennifer Parker in Back To The Future II and III, and she does a great job as the star of this teen comedy adventure.  It's a hell of a fun movie 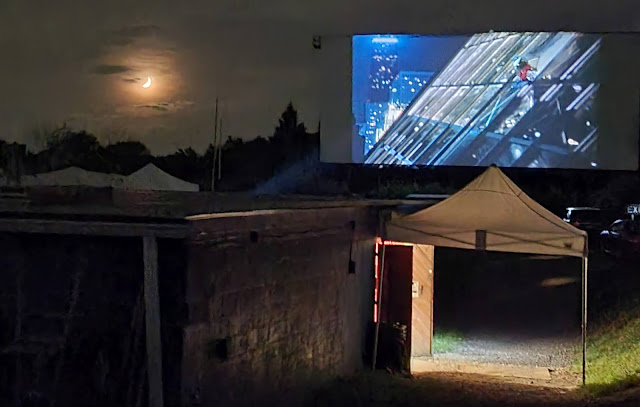 The moon looked pretty awesome last night.  This is the view from behind the concession building toward the end of the movie during the scene that is referenced in it's poster. 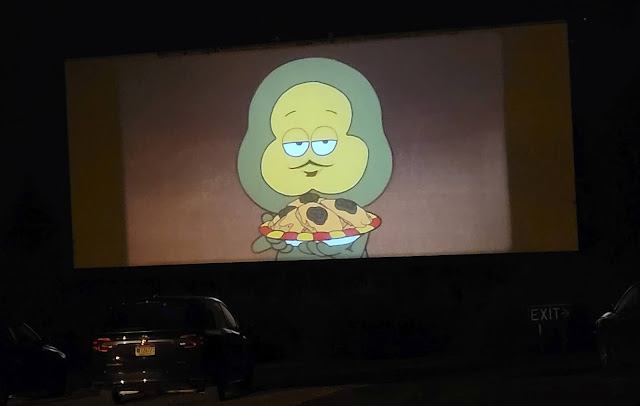 They aired an intermission reel that I hadn't seen before, with animation that reminded me of Jay Ward.  Next time I'm there, I'll have to stop by the projection booth and ask.  They closed out with an old favorite - Rico's Nachos.
After intermission, the second cartoon of the night aired.  It was a 2002 short called Gone Nutty, featuring Scrat from the Ice Age series of films. 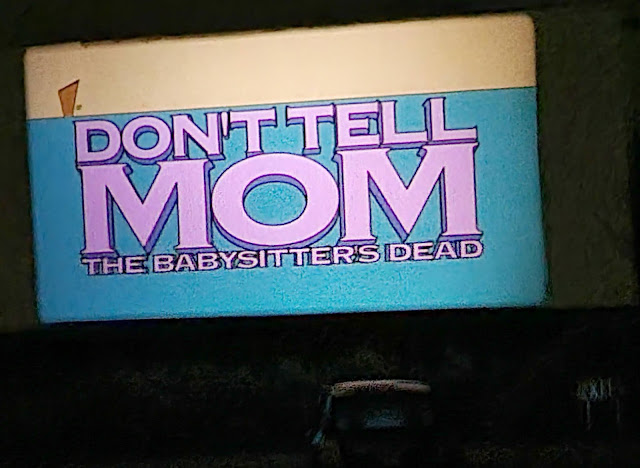 The second half of the double feature was one of my favorite comedies from the early 90s: Don't Tell Mom The Babysitter's Dead.  The Christina Applegate classic was originally shown in theaters 30 years ago on June 7th, 1991.  Man, it's hard to believe that so much time has passed between then and now.  I was just finishing up 5th grade when this movie premiered, and I'm now a 41 year old dude watching it at the drive-in.
I didn't see this in theaters when it first came out, but I taped it off of television when I was living in South Florida a few years later, and I watched it many times in the years that followed.  Seeing it on the big screen was a mild culture shock.  I'm pretty sure that the only version I had ever seen before last night was the one that was edited for television, because every time they said the word "ass", I remember the line being "butt" instead.  It's a really fun comedy flick that I highly recommend if you want to relax and have a good time with a film that doesn't try to take itself too seriously.  Naturally, the crowd erupted for the Keith Coogan scene where he "does the dishes" by skeet shooting them from the roof of the house before delivering what probably be the most memorable line of his career: "The dishes are done, man!"
We'll be back at the Mahoning on Sunday after the ballgame.  They were originally going to show The Good, The Bad & The Ugly, but there was a delay in getting the 35mm print, so it had to be postponed until later in the month.  In it's place, they're having a free screening of Jurassic Park!