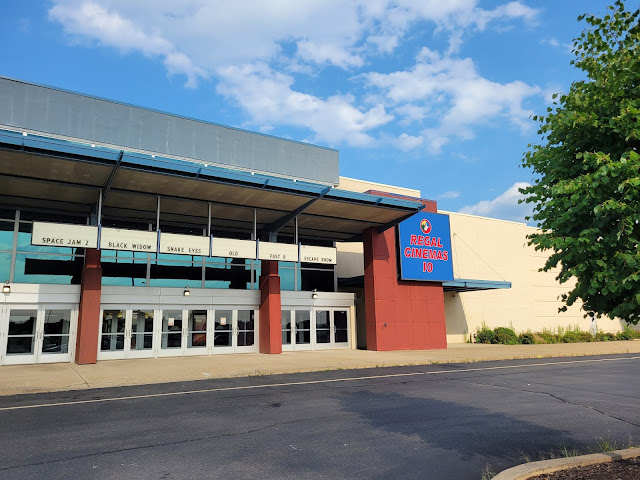 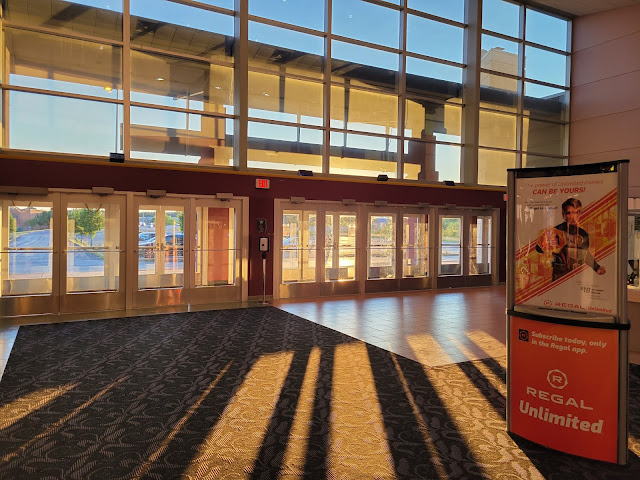 Regal Cinema
Laurel Mall - Hazleton, PA
So many of the movies that we've seen this summer have been at the Mahoning Drive-In Theater, but we haven't neglected the new feature films that are coming out.  We originally signed up for the Regal Unlimited pass two years ago because it would give us the opportunity to see movies that we probably wouldn't have paid $12 each for, and it has definitely been worth the money.  A monthly subscription costs the same as a month of Netflix premium, and I can tell you that I personally have watched at least twice as many hours of movies at Regal than I have on Netflix since the theater reopened. 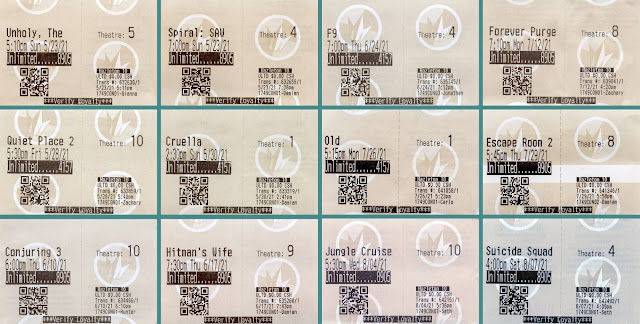 Since the Hazleton theater reopened in May, we have been out to see a dozen movies.  I've already written about The Unholy, Spiral, A Quiet Place: Part 2 and Cruella, but the rest of them have flown under the radar a bit.  These won't be full in-depth movie reviews with star ratings, but just a few thoughts about each of the movies we've seen over the summer that I haven't already commented on. 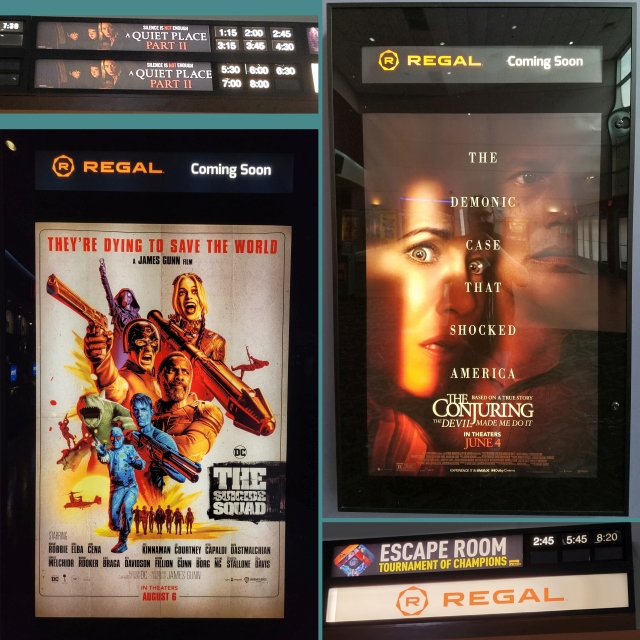 The Conjuring - The Devil Made Me Do It: Demon possession stories have never really been my favorite sub-genre in the world of horror, and I think that Ed and Lorraine Warren were blatant con artists, but I have to admit that their stories make for pretty decent horror flicks.  The latest installment in The Conjuring franchise sort of felt like I was watching Law & Order: Spooky Victims Unit, but it's my favorite in the series so far.
Hitman's Wife's Bodyguard: I had never heard of The Hitman's Bodyguard and didn't realize this was a sequel until about 15 minutes into the film, but I don't think it made me enjoy it any less.  Ryan Reynolds, Salma Hayek and Samuel L Jackson are hysterically funny together.  I still haven't gone back to watch the first movie, but it's on my list.
F9 - The Fast Saga: I haven't seen every movie in The Fast & The Furious franchise, but I've seen enough of them to know that at some point, they've turned the corner and become a lot more fun.  The first few movies are good, but in my opinion, they take themselves way too seriously, and it comes across as unintentional slapstick comedy.  This movie moves far away from the street racing melodrama and delivers an over-the-top, fast-paced action comedy flick.  Dude, an armored truck gets driven in outer space.  Need I say more?
The Forever Purge: This film is a social commentary on racial tensions and our current political climate, but unlike train wrecks such as the 2019 remake of Black Christmas, it does so in a way that is clever and thought provoking.  It tells the story of a political party that embraced their dangerous, radical supporters until they became too unstable to be controlled.  Not my favorite movie in The Purge franchise, but definitely a good movie that makes me want to see the next chapter in the story.
Old: At some point, it became trendy for people on Twitter who fancy themselves as the second coming of Siskel and Ebert to take potshots at M. Night Shyamalan.  He's not my all-time favorite or anything, but I've found his worst movie to be more enjoyable than many other critically acclaimed filmmaker's best efforts.  This movie reminded me of a modern-day Twilight Zone.  It's a damn good story that kept me on the edge of my seat throughout.  Personally, I think the ending explained too much.  I would have faded to black on the sandcastle scene and left the audience guessing about what's really going on, but the twist certainly wasn't bad.
Escape Room - Tournament Of Champions: I watched the first Escape Room movie for the first time the night before we went to see the sequel in theaters, and was impressed with both of them.  It sort of felt like a hybrid of the Saw and Cube franchise, with the gambling element of The Running Man thrown in for good measure, and it all comes together to tell a story that's a hell of a lot of fun.  This may be my favorite horror franchise of the new millennium since the Final Destination series. 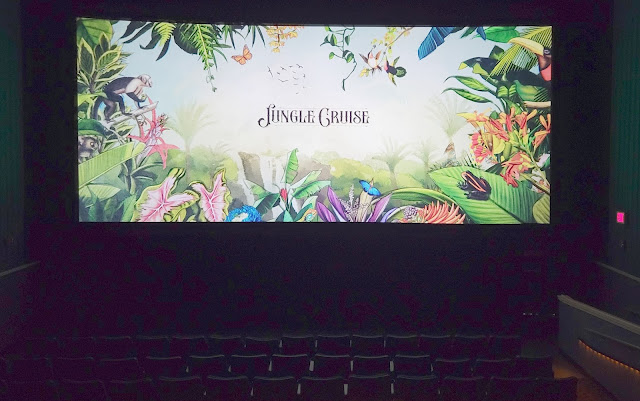 Jungle Cruise: This was a movie I went into with zero expectations.  I hadn't seen a preview, or if I had, I forgot about it entirely.  All I knew was that it was based on a ride at Disneyland and that it starred The Rock.  I don't know if it's because I'm getting older and have grown to appreciate family films more than I did in my 20's and 30's, but I had a great time watching this movie.  There are a lot of things that I think were better when I was a kid, but movies like Jungle Cruise, Paddington, Sonic The Hedgehog, Inside Out, The Call Of The Wild and Onward have all been as good or better than anything I grew up with. 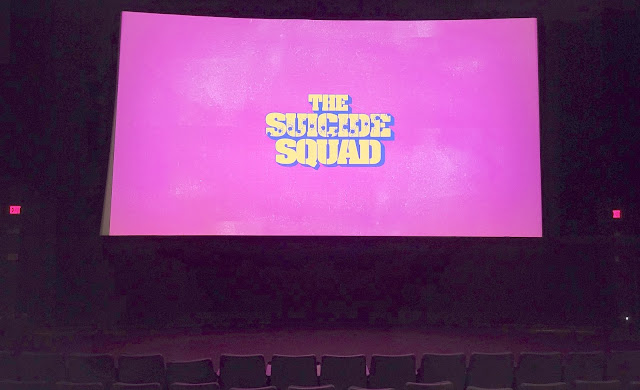 The Suicide Squad: Last, but not least, we saw the The Suicide Squad ten days ago.  First of all, I am not a huge fan of comic books.  I tried to get into them as a kid, but it just didn't stick.  Don't get me wrong - I liked them, but with the exception of the first Batman movie, I didn't fall head over heels in love with superhero stories the way that my friends did.
My tastes as an adult really haven't changed all that much.  I'll go see a superhero movie when it comes out.  Some of them are better than others, but I always have a pretty good time watching them.  However, I don't love them the way that other people seem to.  I have no desire to run out and get the t-shirt, or buy them on Blu-ray, or to even see them again.  The different movies all kind of blend together in my head after the fact.  For example, I know I've seen at least four different Spider-Man movies in theaters, but I couldn't tell you the plot of any of them off the top of my head, other than to say that some bad guy came along, Spidey got his ass kicked, but then he pulled himself together to beat the bad guy in the end.  Fun, but forgettable.
Case in point: The Suicide Squad.  I knew that the name sounded familiar to me, but I figured it had just burrowed into my brain from all of the advertising.  I knew who Harley Quinn was because I had just seen Birds Of Prey last year.  However, I completely forgot that a Suicide Squad movie came out in 2016, and that I had seen it.  Even now after that I've been reminded of its existence, there are only two things I can tell you about it that left a lasting impression: 1. Harley Quinn is one of the characters, 2. Jared Leto plays a version of The Joker who looked like a meth head with spraypainted teeth.  That's it.  I don't remember the plot.  I don't know remember who the bad guy of the movie even is.  I'm sure I liked it, but just like almost every other comic book movie I have ever seen in my adult life, it left almost no lasting impression.
Now, I will be the first to admit that I don't have the best memory in the world.  One of the main reasons I keep this blog is so I'll remember some of the fun things in life years after the details have faded from my mind.  However, my memory isn't so terrible that I forget the plot of every movie I see - just the comic book ones.  I can tell you right now because I just saw it that I enjoyed The Suicide Squad, and I thought the battle with the giant evil starfish at the end was pretty awesome.  Ask me about it in five years and I'll be lucky if I remember the name of the movie, let alone that it had a Godzilla Starfish stomping all over a South American city.
So, with that all being said, definitely go see The Suicide Squad if you haven't already, but don't ask me if it stays true to the comic book because I have no idea.  And if you see me in the street at some point in the future and you want to talk with me about what a great movie it was, don't be surprise if I act like I have no idea what you're talking about unless you're ready to show me a few clips on YouTube to jog my memory.