Beware The Beast Man, For He Is The Devil's Pawn 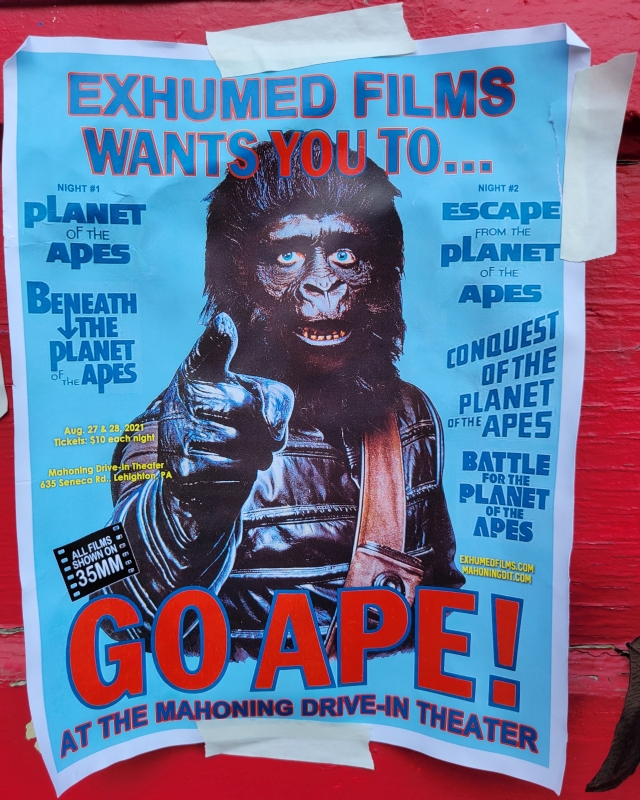 Planet Of The Apes / Beneath The Planet Of The Apes
Mahoning Drive-In - Lehighton, PA
The original Planet Of The Apes is one of my favorite movies of all time.  It's also one of the reasons that I have grown to strongly dislike parodies and pop culture references as I've gotten older.  For every Mel Brooks or Weird Al Yankovic who create parodies that are true works of art in and of themselves, there are about a thousand hacks who make pop culture references that aren't funny or entertaining in the slightest.  I'll bet that you've seen at least a half dozen references of someone standing by the Statue of Liberty shouting "god damn you all to hell" in an anguished voice.  It's a powerful scene that reveals one of the greatest plot twists in the history of motion pictures, but it's been mocked so many times that it's impact is diluted by association.
Well, enough of that.  On to the films. 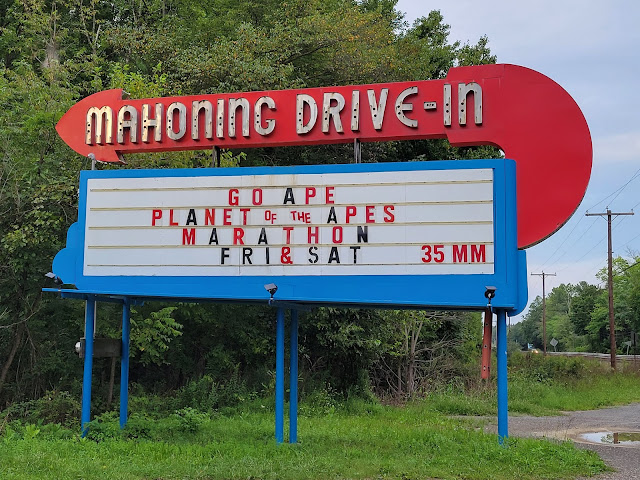 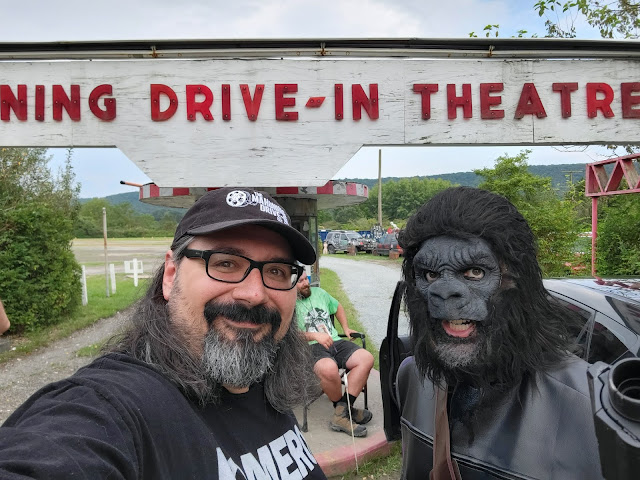 The original Planet Of The Apes movies from 1968-1973 haven't been screened at the Mahoning Drive-in Theater in six years, before many of the staff were here.  As usual, they took a fun idea and made it even more awesome, and it started before we even pulled onto the lot.  A dude (probably JT, but I'm terrible with faces even when they're not under a mask), was hanging out at the entrance in a full ape costume, complete with gun.  They also gave us a raffle ticket for an ape mask that was being given away by Exhumed Films as a door prize.  Looking at this photo made me realize that between the hair and the beard, I'm halfway to a Planet Of The Apes cosplay at all times. 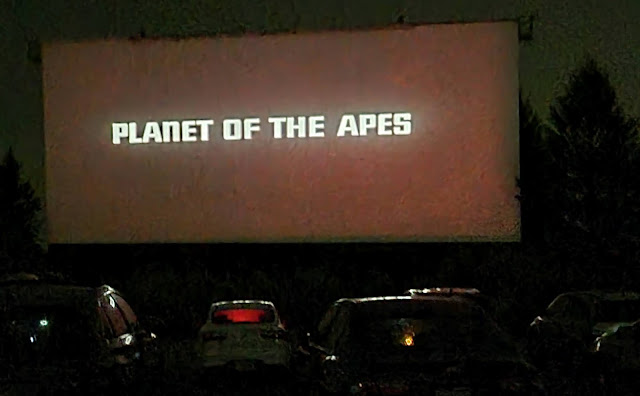 Before the start of the first film, they showed an episode of the YouTube series Hanging With Dr. Z.  If you haven't seen it, it's basically Space Ghost: Coast To Coast if you replaced Space Ghost with Dr. Zaius.  Dr. Z plays a Paul Lynde type of name-dropping, d-list celebrity.  It's alright.  If I'm being completely honest, it's not my favorite type of humor, and I could have done without the lengthy sales pitch to donate to their Kickstarter ($100 bucks gets you a coffee mug), but I appreciate the effort.
Following that, the folks at Exhumed Films showed the original trailers for Escape From, Conquest Of, and Battle For The Planet Of The Apes.  The third, fourth and fifth films of the original series of movies will be screened later tonight, with the first two films being shown last night.
After the trailers, the first film of the Friday night double feature was shown in glorious 35mm, and it was incredible.  I first saw Planet Of The Apes when I was a teenager in the 90's.  I was living with my grandparents in West Hazleton and working at Blowout Video, a movie rental store that was inside of our local Wal-Mart.  We were allowed to rent as many movies as we wanted for free as long as they were still in the shop at the end of the night and that we bought them back early the next day, so I got to see a lot of movies that I hadn't seen before.  I was so blown away by the first movie that I rented the next four throughout the rest of the week.  It's one of my favorite film series of all time, and I'm so thankful to have had the opportunity to see it on the big screen. 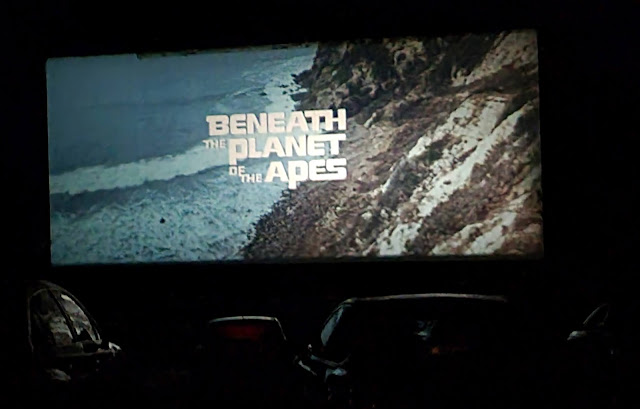 After the intermission reel, they screened another episode of Hanging With Dr. Z, which gave me an opportunity to check in and see how the Phillies were doing.  They're in the middle of a series with the Arizona Diamondbacks - the worst team in the National League this season, and a team that swept Philadelphia earlier this month and won the first game in their current series on Thursday.  Thankfully, the Fightins managed to win in extra innings, but not before giving up up a two run lead on two separate occasions.  It's pretty disheartening to go from a first place team to having to scratch and claw to beat a team with a .338 winning percentage.  But enough about the apocalypse at Citizens Bank Park.  Tonight is about the one that occurs in the year 3955 on the big screen.
Beneath The Planet Of The Apes is the 1970 sequel to the original film.  It's the story of Brent, an astronaut from the 1970's who has followed the same trajectory as Taylor's crew from the first film, and as a result has crash landed back onto the Earth 2,000 years in the future.  He discovers that he's on Earth and finds a cult of deformed telepathic humans living in the ruins of St. Patrick's Cathedral in New York City deep in the Forbidden Zone.  This group prays to an ancient nuclear weapon that has the power to destroy the world.
This movie has a lot of really cool ideas, but I find it to be one of the weakest of the original series.  The plot drags quite a bit in the first half, taking too long to bring the protagonist up to speed with what Taylor learned in the first film.  I don't mean to say that it's bad, but it's a big step down from its predecessor, and not quite as good as the third and fourth movie in the series in my opinion.  Still, I'm very happy to have had the chance to see it under the stars in Lehighton as the second half of an awesome double feature.