Pluto And The Weekend Of Terror 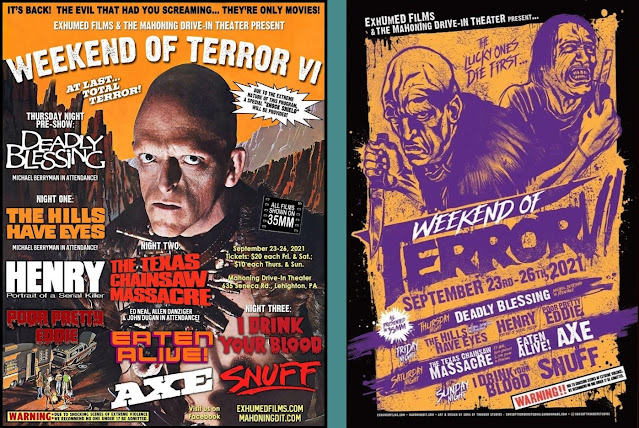 Weekend Of Terror VI
Mahoning Drive-In - Lehighton, PA
Dude... this place just keeps getting better and better.  The fact that I live within driving distance of the Mahoning Drive-In makes me feel like I've hit the lottery.  Look at that incredible list of horror flicks!  If that's not awesome enough, Michael Berryman was in attendance on Thursday and Friday, and three members of the family of cannibals from The Texas Chainsaw Massacre will be at the Drive-In later tonight: Ed Neal (the hitchhiker) Allen Danziger (Jerry), and John Dugan (Grandpa). 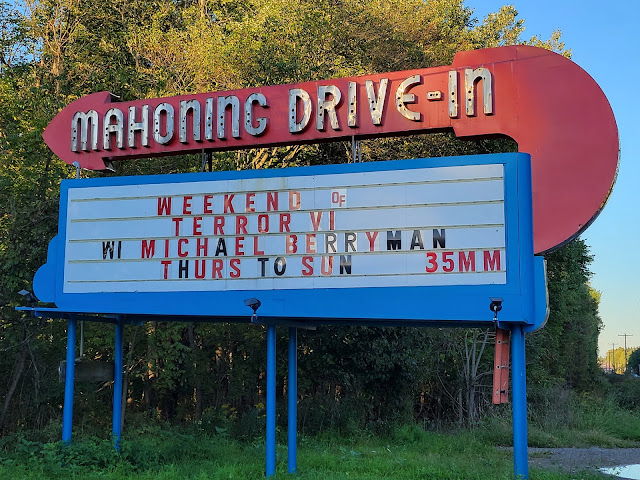 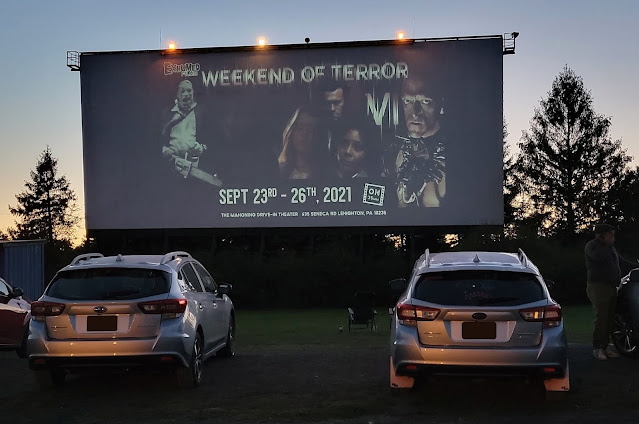 As much as I wanted to go to all four nights of the Weekend Of Terror, we were only able to make it to Friday, but what a hell of an awesome night it was!  The Hills Have Eyes and Henry: Portrait Of A Serial Killer are two of the greatest and most truly terrifying horror films of all time, and while I've never heard of Poor Pretty Eddie before, I'm always happy to go experience a classic for the first time, especially at the Mahoning Drive-In. 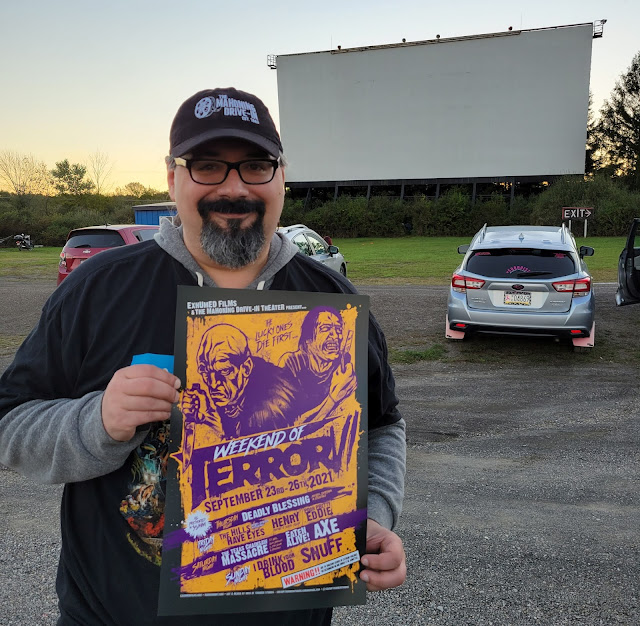 Check out the incredible poster from artist Jason Cortez.  I've seen a lot of awesome posters from many very talented artists this year, and there's are dozens more hanging on the walls in the snack bar from previous seasons.
I'm thinking about trying to reach out to all of these artists over the winter to see if they'd be interested in turning their work into a series of Mahoning Drive-In trading cards.  The front of each card can be a miniaturized version of each show poster, and the back can have facts about the movie, or the performers, or even a history of when the movie originally screened at the Mahoning.  They'd make a great collectible, and a pretty cool thing to ask the special guests to autograph when they come to the drive-in for meet-and-greets. 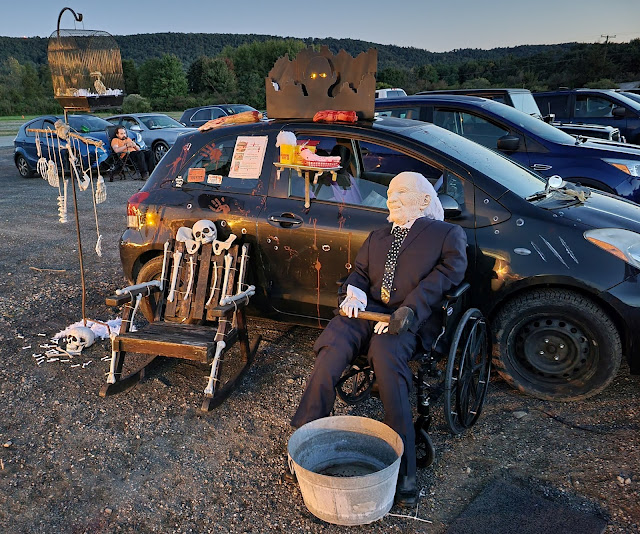 A lot of the vehicles were decked out for the movies that are showing during the Weekend Of Terror, including this awesome setup of Grandpa from The Texas Chainsaw Massacre. 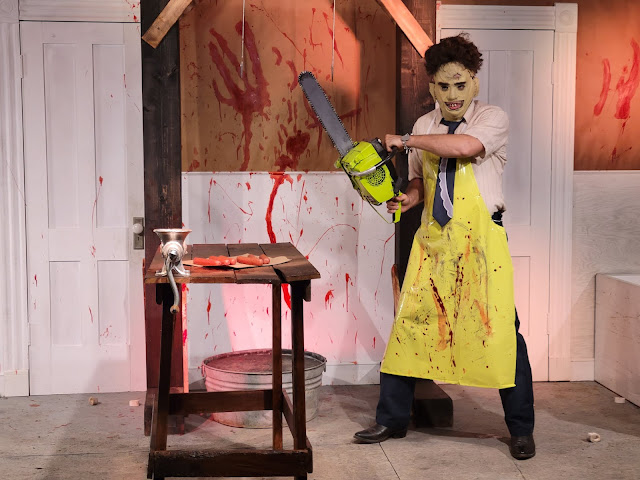 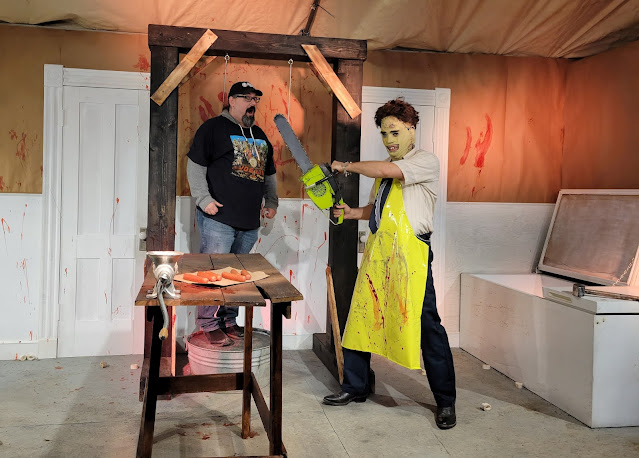 J.T. and the rest of the crew outdid themselves with the photo op stage for this weekend.  That's him under the mask holding the chainsaw with me on the meat hook. 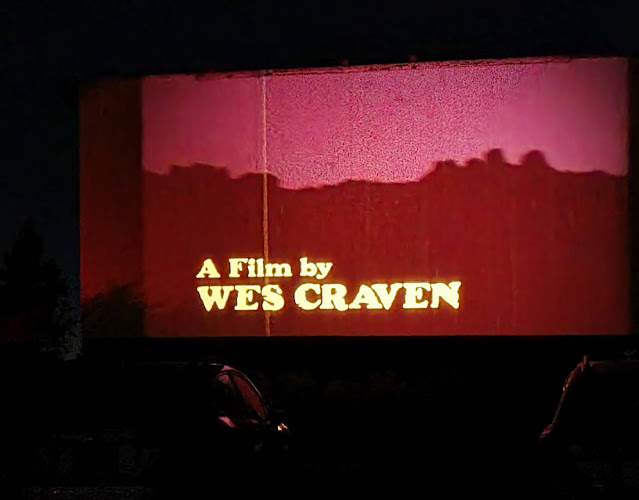 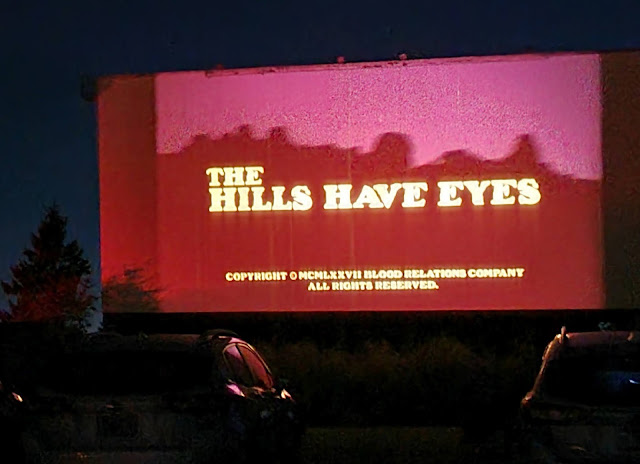 The first movie of Friday night was the second film from the great Wes Craven, the 1977 horror/thriller classic: The Hills Have Eyes.  This has been one of my favorite horror movies of all time.  As much as I love slasher villains like Michael Myers and Jason Voorhees, they tend to wear a little thin on me after while.  They remind me of a Hulk Hogan match because they're fun to watch, but you start rolling your eyes a bit when it becomes clear than no matter how much they get beaten down, they're going to "hulk up" and come back for the big win.  I prefer a villain that can be defeated to one that gets shot at point-blank range a dozen times and keeps coming back.  I'm not saying that the villain has to win, but it shouldn't be a foregone conclusion, which is what it has become for a lot of popular horror franchises.  The terror of The Hills Have Eyes is in its realism. The family of cannibals are pure evil, and family sitting in their broken down truck and camper in the middle of the Nevada desert are sitting ducks.  It's a level of tension that few movies can match. 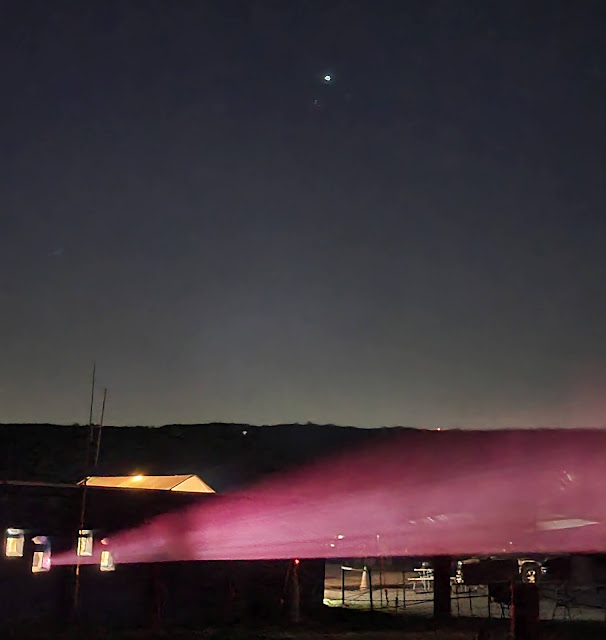 The folks at the Mahoning shared the two bottom photos on Twitter during the screening of The Hills Have Eyes.  Mr. Michael Berryman was in the projection room during the film watching as his character, Pluto, continues to terrorize the movie audiences around the world 44 years later. 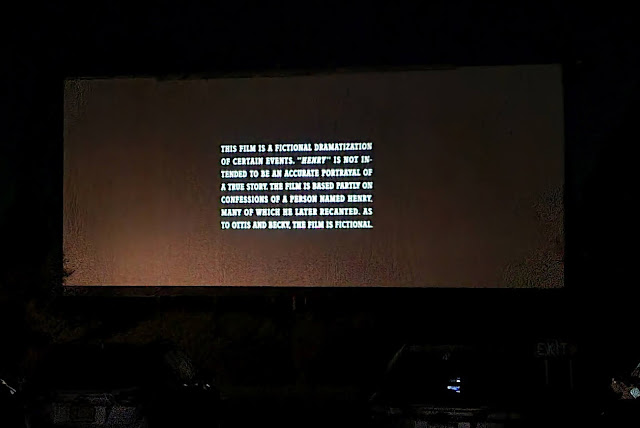 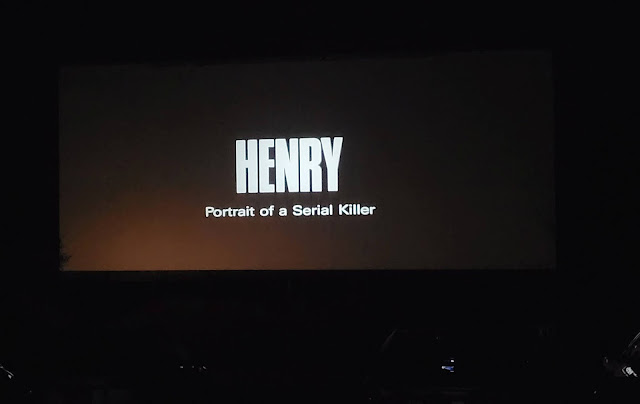 The second movie of the night took realistic terror to a new level that I don't think has been equaled since it premiered in 1986.  The title character in Henry: Portrait Of A Serial Killer, played by the incredible Michael Rooker, is my pick for the single most frightening character in cinematic history.  He doesn't yell and scream.  He doesn't have a clever catch phrase, or a special weapon that he uses on his victims.  He's an ordinary guy in every sense of the word.  You've met and forgotten countless people in your life who are just like him.  Some of them have done things behind closed doors that would send shivers up your spine, and you would never know it.  Henry is the kind of person you have the most to fear from, because there is no motive, no pattern, and no reason for you to be their target, but no reason for you not to be.  The world isn't full of Freddy Kreuger's.  It's full of Henry's, and their victims never see them coming.  If you haven't seen it, find a copy, turn off the lights, and spend 83 minutes experiencing the closest thing to a real world horror that you're ever going to experience in a motion picture. 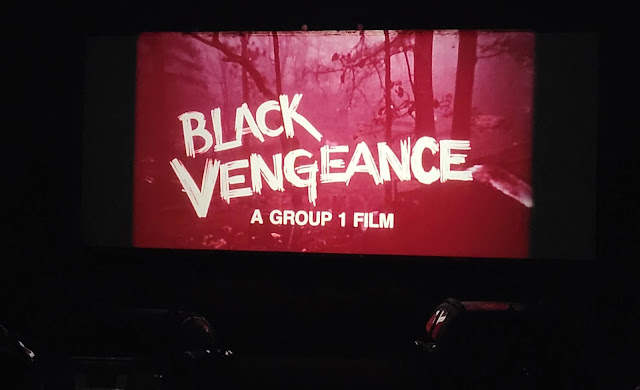 The final movie of the night has had many different versions released under many different names, but the original title of this 1975 grindhouse film is Poor Pretty Eddie.  The version that was screened last night was titled Black Vengeance, which was the title it went by when it was marketed as a blaxploitation film.  I'm not sure if there were any additions or subtractions from the original that changed the story in any way, but there are some versions in existence that drastically change the tone and plot of the movie.
The making of Poor Pretty Eddie is probably more interesting than the movie itself.  It was financed by a convicted murderer who escaped from prison in 1978 and was at one time on the FBI's Ten Most Wanted List.  It's not my favorite movie in the world by any stretch of the imagination.  In fact, it's pretty uncomfortable to watch, but I suppose that's the point.  It might have redeemed itself if the Liz Wetherly character had a more suitably brutal revenge to enact on Eddie Collins, but the ending was anticlimactic and fell a little flat in my opinion.  I'm glad I got to see this movie, but I'm not going to want to see it again. 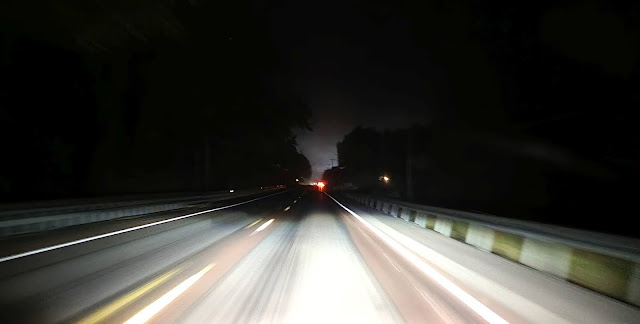 And so ends another incredible night at the mighty Mahoning Drive-In Theater.  I'll be back next weekend for Tarantino-A-Go-Go.