Have Fun Storming The Drive-In 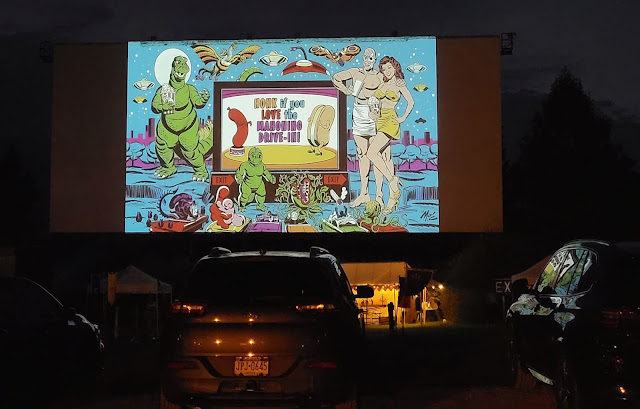 Medieval Mahoning
Mahoning Drive-In Theater - Lehighton, PA
Many of the movies that I grew up watching in the 80's were from VHS tapes that my grandfather recorded off of tv.  Some of them were from the HBO, Cinemax and The Disney Channel free preview weekends, while others aired on network television.  I watched the heck out of those tapes when I was a kid, to the point where I had memorized nearly the entire script of movies like Return Of The Jedi, Indiana Jones & The Temple Of Doom, The Wizard Of Oz, Flight Of The Navigator, The Neverending Story, The Three Caballeros and The Sword In The Stone.  Another of these movies that I watched countless times as a kid from tapes that my grandfather recorded off of tv is my favorite family comedy of all time: The Princess Bride.  I didn't get to see it in theaters when it it was released in the Fall of 1987, but once again, the Mahoning makes dreams come true. 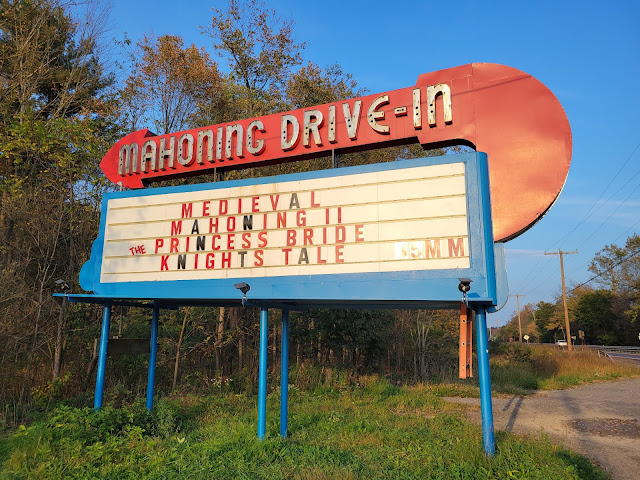 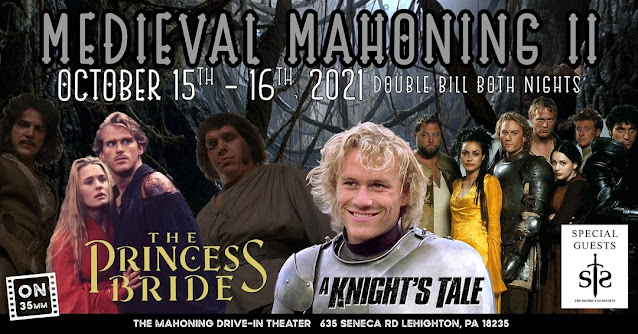 Before the movies started, there was a mini-festival taking place beneath the screen.  A local group from Lehighton called The Sword Tag Society were special guests of the Mahoning for this weekend's Medieval Mahoning event.  They're a non-profit social club that struck me as being inspired by things like the Renaissance Fair or Dungeons & Dragons, while at the same time not being limited by the boundaries of either of those fandom.  They had tents set up where they were selling merchandise, and there were areas that had been roped off for sword fighting and archery.  I talked to a few of the folks from the STS and they told me they had recently purchased a chapel that they were turning into their base of operations, which reminded me a bit of The Sanctuary in Hazleton.  Very cool! 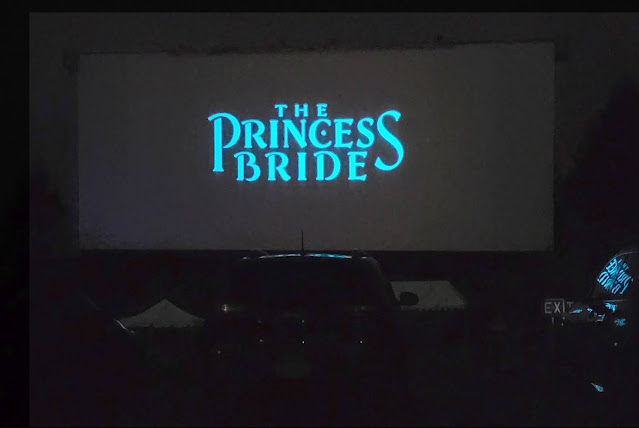 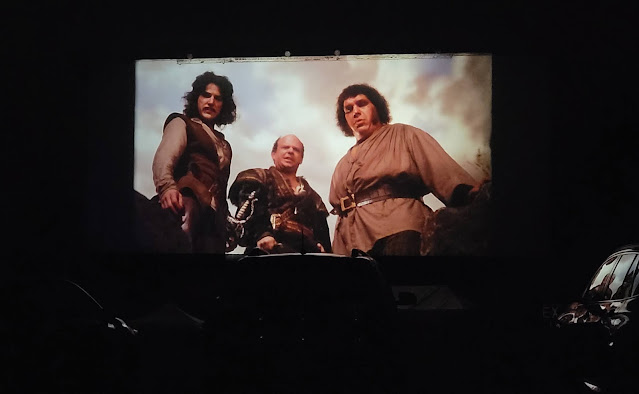 The Princess Bride is a rare shining diamond in the world of motion pictures.  It's an entirely self-contained universe that has no prequels, or sequels, no reboots or remakes, and no television series based on the movie.  It's a brilliant film adaptation of the 1973 William Goldman novel of the same name, and everyone in the movie delivered what I believe to be the best performance of their career.  The dialogue is hysterically funny with dozens of quotable lines, and at no point does the humor ever feel forced.  I believe that this is one of the very few perfect movies that exist in the world, where nothing could possibly be done to make it better.  It's is genuine, sincere, and timeless... a perfect movie. 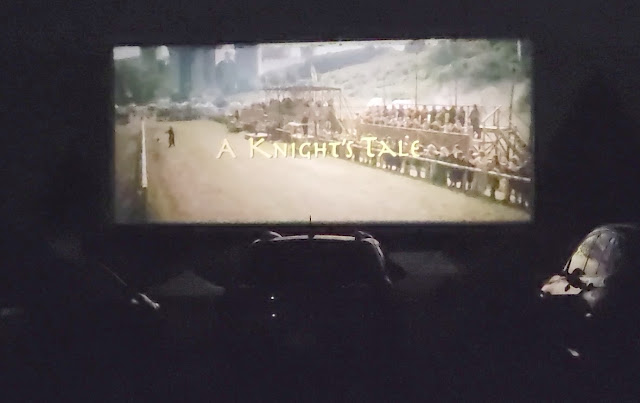 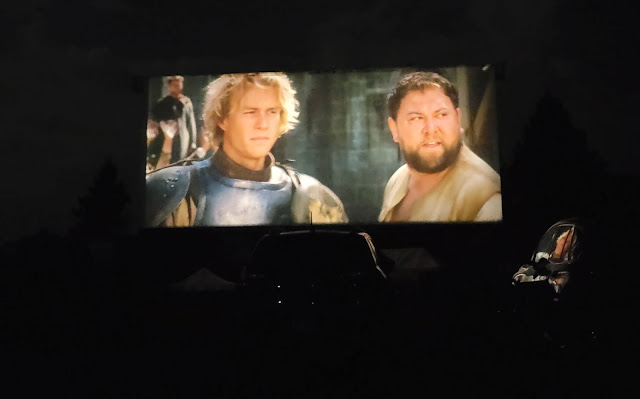 When they first announced that the second half of this double feature was A Knight's Tale, I was a little underwhelmed.  Robin Hood: Men In Tights seemed like it would have been a perfect fit.  It came out in 1993, just six years after The Princess Bride, and it's also a comedy starring Cary Elwes that takes place in a medieval era.  I thought that I didn't know anything about A Knight's Tale other than the fact that it came out in 2001 and it stars Health Ledger.  About five minutes into the movie, I realized that not only had I seen this movie before, but I absolutely loved it!
One of the reasons I keep a blog and take so many photos is that I have a really terrible memory for some things, and movies are one of those things.  If I watch a movie four or five times, it'll usually stick in my head like glue, but if I see something only once, it gets buried to a filing cabinet in the back of my brain.  If you just showed me the cover of the DVD and asked me what I thought of it, I'd probably tell you that I don't think I've ever seen it before, but if you put the movie in and played a few minutes of it, it would be enough to trigger the memory and I'd remember that I had.  That's what happened with A Knight's Tale.  I don't remember if I rented it or saw it in the movie theater back in 2001, but I know I enjoyed it then, and I enjoyed it last night.  In fact, I think it's a much better film than Robin Hood: Men In Tights, and I'm very happy that the Mahoning allowed me to rediscover it. 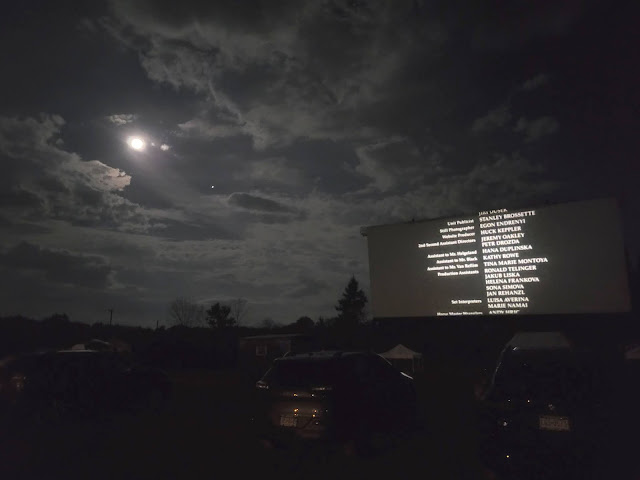 It's mid-October and the season is starting to wind down.  This drive-in has become such a special place in my life over the past five months.  It's a place where I can truly kick back and have a fun, relaxing night and feel completely at peace in the world.  We'll be spending five more nights at the Mahoning before they close up for the winter, and I'm going to enjoy every last moment of it.