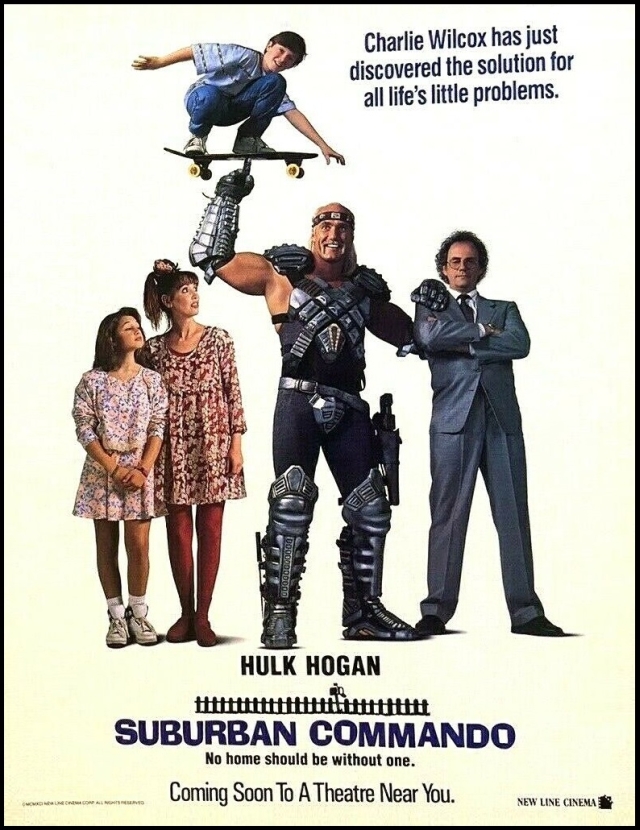 Suburban Commando
New Line Cinema (1991)
Hulkamania ran wild in theaters nationwide thirty years ago this month with the release of the 1991 Hulk Hogan, Christopher Lloyd and Shelley Duvall science fiction comedy flick, Suburban Commando.  It's a terrible movie that flopped at the box office and was recommend by Michael Wilmington of the Los Angeles Times as a film you should only pay to see if "a sudden cloudburst drives you to shelter".  However, this firmly lands in the category of so-bad-it's-good.  The acting is terrible, and the story is so ludicrous that it almost dares you not to laugh and find enjoyment in what you are seeing.

If you're not excited by the concept of Hulk Hogan as an alien warrior who crash lands his spaceship on Earth, maybe this will convince you.  At around a quarter of the way though the movie, Hogan finds that his freeze gun was stolen.  He confronts the thief, who is using the weapon to rob a bank, only to have the gun turned on him.  When the smoke clears, the former WWF Champion is unaffected as he is shown chugging a small hotel-sized bottle of liquid before wiping his mouth, staring at the camera as he growls the word "anti-freeze".
The movie also features The Undertaker in a brief role as a bounty hunter, and Michael Faustino, the younger brother of David Faustino, who is best known as Bud Bundy from Married With Children.  He's the kid on the skateboard in the poster.  Also, what other movie gives you the opportunity to see Doc Brown and Wendy Torrance as an early 90's suburban couple?

Between the Laurel Drive-In, the theaters at the Church Hill and Wyoming Valley Mall, I saw a lot of movies at the theater in the late 80's and early 90's.  My grandfather took me to see all of them, so he sat through god only knows how many terrible movies.  I guess he figured it was better than watching our VHS copy of Indiana Jones & The Temple Of Doom for the 100th time.
If you want to suffer though this movie like my grandfather did back in 1991, you can stream Suburban Commando though Amazon Prime Video.  You might want to have a bowl of nachos ready before you press play, because it's gonna get cheesy in a hurry!