The Man Who Sprinted To A World Series Title 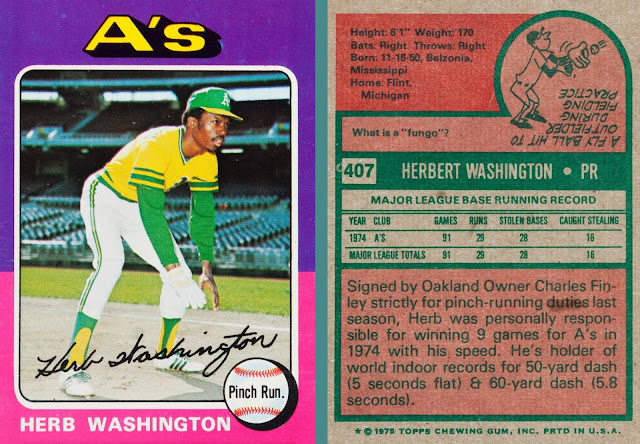 Herb Washington
Oakland Athletics (1974 - 1975)
Happy 70th birthday to a man who has had one of the most interesting careers in the history of Major League Baseball.  Mr. Washington was a track and field runner who held records in both the 50 and 60 yard dash.  He was 22 years old and had no experience in pro baseball when he was signed by Charlie Finley to serve as the Oakland Athletics pinch runner for the 1974 season.  It is the first, and only time in the history of the sport that a member of a team's 40 man roster was used exclusively for pinch running appearances.
In his career, which spanned from April 4th, 1974 to May 4th, 1975, Mr. Washington appeared in a total of 110 games, including five post-season games (two in the ALCS and three in the World Series).  In that time, he stole 31 bases and scored 33 runs without ever having a single plate appearance or inning played in the field.  His Oakland A's went on to defeat the Los Angeles Dodgers in the 1974 World Series, so in his one and only full season in Major League Baseball, Herb Washington earned a World Series championship ring without ever once having to pick up a bat or a glove for his team.