A Perfect End To The Christmas Season

8-Bit Christmas
HBO Max (2021)
It wasn't easy, but I held back on watching 8-Bit Christmas until just a few hours ago.  I started watching it at around 10 pm on Christmas night and finished up just after midnight.  It's not often that a Christmas movie touches my heart this much, but this did the job, and it's going to be right up there with Scrooged, A Christmas Story and National Lampoon's Christmas Vacation as an annual tradition from this point forward.
I did my best to avoid spoilers, reviews, previews, or anything else about this movie.  From the title, it's obvious that it's a story told in the late 80's about a kid who wants a NES for Christmas, which is as close to a story about a chapter in my life that I have ever heard of.  Aside from that, there was only one small piece of information that I had about this film.  Someone on Twitter mentioned that the end of the movie is going to make me cry.  Thankfully, I have a really lousy memory, so I had forgotten about that right up until I saw the end for myself.  I can't remember who said it, but they were right.  In the words of Buster Poindexter from Scrooged: "Niagara Falls Frankie Angel". 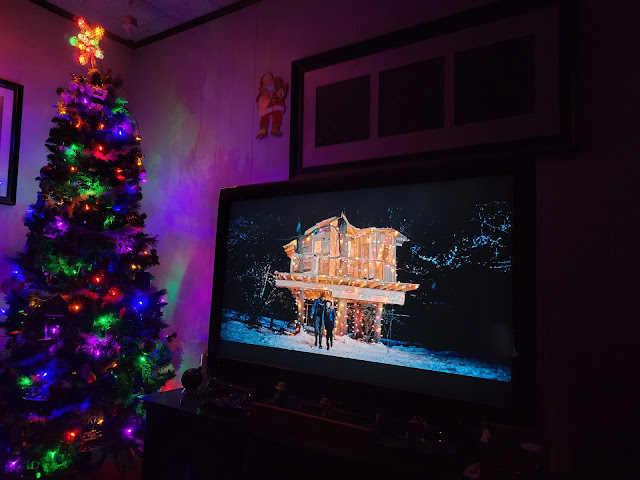 There are plenty of movies that are set in the 80's, but most of them tell their story from the perspective of someone who was a young adult in the decade, such as The Wedding Singer and Adventureland.  Stranger Things and The Goldbergs are stories told from the perspective of kids who grew up in the 80's, but both take a lot of creative liberties with the decade and have plot elements that weren't a part of my childhood.  That isn't the case with 8-Bit Christmas.  The character of Jake Doyle and the adventure that he goes on is as close to my childhood as anything I've ever seen on screen, right down to the parents who wanted me to go outside and get fresh air instead of sitting inside and playing Nintendo.
I don't want to spoil anything about the plot, but if you're a young Gen Xer who grew up in the 80's, you're going to love this movie.  It's got a lot of fun memories, a lot of laughs, and exactly the right mix of realism in the touching moments to make it a truly special movie.  And yes, if you have a heart, the end is probably going to make you cry.
If you're not played out on Christmas just yet and you have room to squeeze in one more film before you pack away the tree for another year, I highly recommend 8-Bit Christmas.