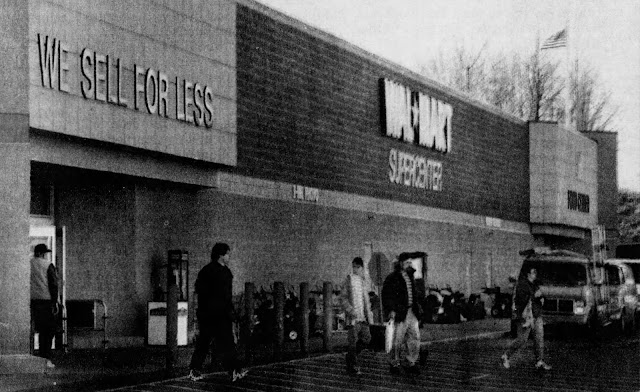 Wal-Mart Supercenter
Airport Road - Hazleton, PA (1996)
Throughout my life, my grandparents would tell me that time goes by faster the older that you get.  When I was younger, I rolled my eyes at illogical sentiments like this.  After all, time is time, and the age at which you experience it shouldn't matter a bit.  Well, I'm here to tell you now as a man in his early 40's that it's no bullshit.  When I was in high school, we would get four report cards per year.  Each marking period between report cards was nine weeks long, which felt like to me like nine months.  A full school year felt like an eternity.  We're now entering the final week of 2021, and it feels like this year has gone by in the blink of an eye.
These thoughts started rolling around my mind this morning when I was considering the differences between the day after Christmas in the UK and the United States.  Across the pond, December 26th is called Boxing Day.  I won't pretend to be an expert on the holiday, but when I was in London over the holidays a few years ago, it reminded me a lot of Black Friday here in the States.  It's a shopping holiday in which stores advertise big sales that attract massive crowds.  Stores here in the US also tend to get busy on December 26th, but we don't really have many store sales except maybe for unsold Christmas candy and decorations that they've put on clearance.  The reason for the increased store traffic over here tends to be for returns.
I've worked retail for a few different places over the holiday season, but the one that sticks in my mind the most happened 25 years ago, on December 26th, 1996.  This isn't one of those times that "feels like only yesterday", but it damn sure doesn't feel like it was a quarter century ago.  I was 16 years old and working for the Wal-Mart Supercenter in Hazleton, PA.  I had just started working there in the fall, with most of my time being split between the front end registers, the customer service desk, and the Lawn & Garden department, which also served as the Christmas decoration department during the holiday season.
On the day after Christmas, just about everybody who was register trained was working on the front end doing returns.  We had all 30 registers open and at least a third of them were set up exclusively for returns, and that's where I was assigned for my shift.  Wal-Mart had a very forgiving return policy back then, so we took back just about everything for a refund of either cash or store credit whether they had a receipt or not.  I had a line of people who were returning items for eight hours nonstop, and we took back a ton of merchandise, including some things that I knew for a fact that we didn't sell.  I'm pretty sure one guy just took a VHS tape that he had for years off of his shelf and brought it into the store for a full refund, but it fulfilled the policy requirements, so the dude walked away with a gift card for about $15 bucks.
With the increase in online shopping and the Omicron variant, they probably aren't nearly as busy with returns today as they were twenty five years ago, but it's one of the busiest days I've ever worked in my life.