Loaded Up And Locked Out With a lockout on the horizon, a flood of trades and free agent signing have taken place over the past week.  Unfortunately, the Phillies have done very little to take advantage of this window of time, so they will likely have to wait until Spring 2022 to make any further improvements to the team.
The biggest acquisition the team made so far was the signing of relief pitcher Corey Knebel to a one year, 10 mil contract.  The 30 year old right hander was originally drafted by Dave Dombrowski in the first round of the 2013 draft.  He would go on to make his MLB debut for the Tigers one year later.  Injuries have kept him from living up to his full potential, but he had a remarkable 2017 season for the Milwaukee Brewers in which he recorded 39 saves and made the All-Star Team.  He finished that season with a 1.78 ERA in 76 innings of work, and he set a MLB record for relief pitchers by starting the season with 45 consecutive appearances in which he recorded at least one strikeout.  Tommy John surgery set him back in 2019 and 2020, but he had a strong season for the 2021 Dodgers with a 4–0 record, 2.45 ERA, three saves and 30 strikeouts in the regular season, and he recorded 11 strikeouts to one walk in just under six innings in the post-season.
The Phillies made a last minute signing before the lockout last night when they signed infielder Johan Camargo to a one year, 1.4 mil contract.  He's floated between the Atlanta Braves and their Triple A affiliate since 2017.  His bat has cooled off at the MLB level in recent seasons, but he had a .326/.401/.557 slash line in 104 games for the Gwinnett Stripers in 2021. Additionally, he appeared in games at every position except catcher, center field and left field last season, so the hope seems to be that he will bring defensive versatility off of the Phillies bench in 2022.
These aren't the only moves the Phillies made this off-season.  A few weeks ago, the Phillies traded for two catchers.  They acquired Garrett Stubbs from the Astros, and Donnie Sands from the Yankees (along with pitcher Nick Nelson).  Even after non-tendering Andrew Knapp (who has already signed with the Reds), the catching position is the one areas where the Phillies have respectable depth, so the acquisition of two catchers who are presumably coming to camp to compete for job to back up JT Realmuto leads me to believe that Dombrowski intends to shop Rafael Marchan or Logan O'Hoppe in a trade this winter.  I suspect that Marchan is more likely to be dealt because it would open up a spot on the 40 man roster, but Dombrowski has a reputation for unloading prospects for proven talent at the big league level, and O'Hoppe had a very impressive showing in the Arizona Fall League, so maybe they see his value as being high at the moment.
Aside from that, the Phillies picked up four pitchers off of the waiver wire - right hander Yoan López from the Atlanta Braves, and three lefties: Ryan Sherriff from the Rays, Kent Emanuel from the Astros and Scott Moss from the Guardians.  The Cleveland Indians new name is going to take a little time to get used to; it still feels strange to say Guardians.  These waiver claims aren't the kind of news that's going make headlines, but these acquisitions around the margins sometimes can make a huge difference in a season, especially when it comes to the bullpen.  Relief pitchers are an inconsistent lot from year to year, so signing a relief pitcher for top dollar is often as much of a lottery ticket as a waiver claim can be.  Maybe these guys will contribute to an effective bullpen, and maybe one or more of them won't even make the team out of Spring Training.  Time will tell.

The most depressing baseball news for me this winter is the loss of one of my favorite players, Héctor Neris.  He has pitched out of the Phillies bullpen since 2014, and in that time, he has gone on to become the team's all-time leader in strikeouts for a relief pitcher.  I was hopeful that the Phillies would have re-signed him, but he signed a two year deal with the Houston Astros.  He is unquestionably one of the greatest relief pitchers to suit up for the Phillies over the past twenty years, and I expect that we are going to miss what he brought to the team. 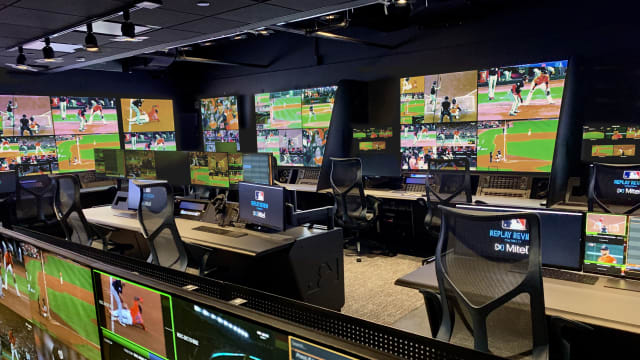 And that's it for now.  Until the league and the players' union come to a collective bargaining agreement, all transactions have been suspended.  This comes as no surprise to anyone who pays attention to the game, but it is disappointing that the Phillies weren't able to address more of their needs before the start of the lockout.
It's disappointing that the Phillies weren't able to address more of their needs for the 2022 season.  I was hoping they would sign Kris Bryant and make a trade with the Pirates for Bryan Reynolds (even if it costs top prospect Mick Abel).  There were rumors that linked the Phillies to both players over the past few weeks, as well as Kevin Kiermaier, Nick Castellanos, and Kyle Schwarber.  Personally, I'm not too interested in seeing Kiermaier or Castellanos come to Philadelphia.  Schwarber would be a good addition, especially as a leadoff bat, but his defense in LF is pretty sketchy, so they better have a darn good defensive center fielder in mind if they plan to go down that route.
The reason I prefer Bryant to the other free agents is that can fill the absence left by Andrew McCutchen in LF, but he would bring a lot of defensive versatility to the club because he can also play 1B, 2B, SS, 3B and CF if needed.  Also, I would trade any combination of prospects not named Bryson Stott to get Reynolds out of Pittsburgh.  He's an elite center fielder who's under team control through 2025.  If the Phillies are going to get the most value out of the prime years of Harper, Realmuto and Wheeler, this is the kind of trade they need to make.  I can see the need to keeping Stott because he's proven all he can prove at the minor league level, and the Phillies have a need at SS, but I would have no hesitation trading any other prospects (especially pitching prospects) to bring Reynolds to Philadelphia. 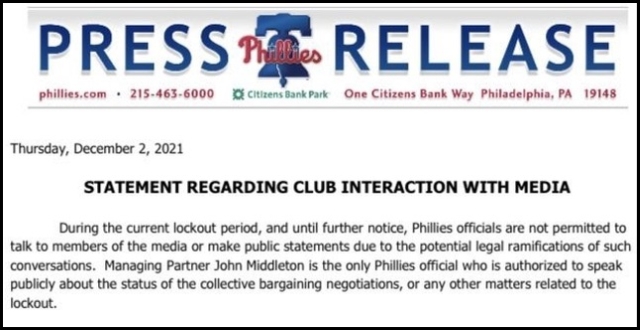 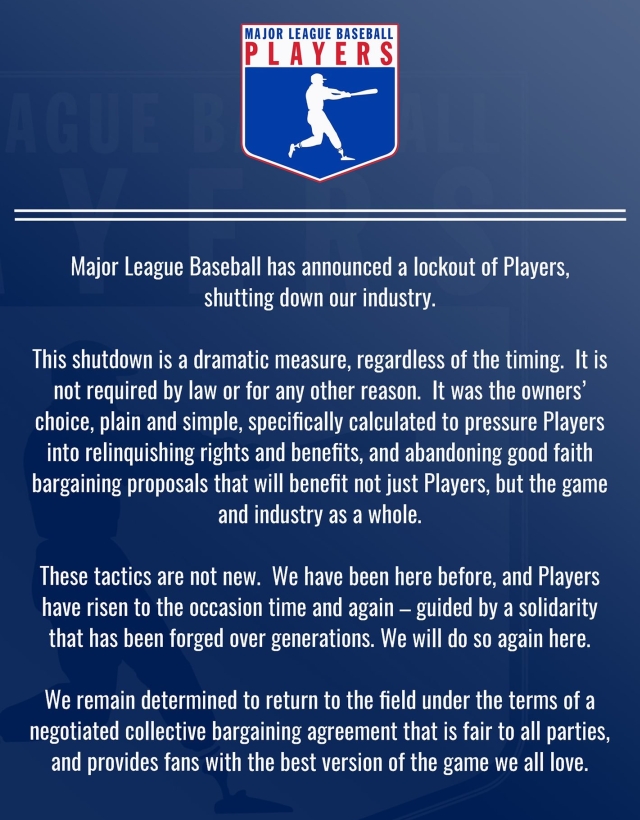 However, all of the talk of potential signings and trades are officially on hold for the foreseeable future as we enter the ninth work stoppage in baseball history.  The Phillies issued a press release which basically said that, with the exception of John Middleton, no one from the team is allowed to talk to the media.  Rob Manfred issued a full letter to the fans on behalf of the league, and the Player's Association also put out a message on Twitter.  Both of these suggest that the two sides are nowhere near reaching a settlement, and if the negotiations before the 2020 season are any indication, this could go on for a very long time.  Hopefully they come to an agreement in plenty of time for Spring Training and the 2022 season to begin as scheduled, but it wouldn't surprise me much if that wasn't the case.  Work stoppage issues have caused the cancellation of over 1,600 games in my lifetime, including the 1994 playoffs and World Series, and the two sides may even be further apart today than they were in 1981 and 1994.
I'm not picking a side in this fight between the owners and the players.  Player salaries have skyrocketed well beyond the income of any other profession, including hundreds of millions of dollars that have been paid to players who played poorly, or barely played at all, or in some cases, didn't play a single inning through the life of their contract.  On the other side, the league holds the television rights of games hostage with an archaic blackout restriction policy that should have been done away with in the 1960's, and the cost of going to a ballgame has risen to a point where many families simply can't afford it.  Neither side has the fans in mind, except to the extent that we allow them to live the lives of millionaires and billionaires.  I hope this results in the National League getting the DH.  I hope that something is done to limit the overuse of defensive shifts.  I hope they don't make a mockery out of the playoffs by letting two dozen teams into the post-season.  I hope that whatever financial structure that the teams have to work with don't hinder the Phillies chances to field a competitive team, particularly since the team owner has no interest going over the Luxury Tax threshold despite lip service to the contrary.  I hope that no games are cancelled, and that the owners and players can put their greed aside and play ball.