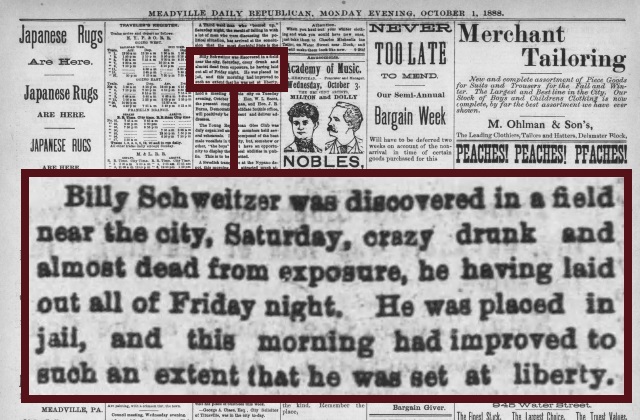 Meadville Daily Republican
Monday, October 1st, 1888
Since the new year began, I've been spending a little time doing research on Ancestry.com to build a family tree.  I came across this little nugget of information from the 19th Century that I found to be pretty interesting.  According to a newspaper report out of Meadville, Pennsylvania, a man named Billy Schweitzer was discovered "crazy drunk and almost dead" after laying out in a field outside of the city all night.  He was brought to jail where I'm assuming he sobered up and was once again let loose among the townsfolk.
Now, I can't say for sure if this person is my ancestor.  My family settled in Pennsylvania, and the name William Schweitzer goes back four generations to my great-grandfather, but he was born in 1904 and, to the best of my knowledge, no one in my family has ever lived in Meadville.  However, I suppose that it's possible that a great, great, great uncle of mine may have gone on a bender and passed out drunk in a Pennsylvania field.  There's also an outside chance that my future self will fall into a time portal and land back in 1888 where I proceed to get blitzed on a Friday night before passing out in a field.