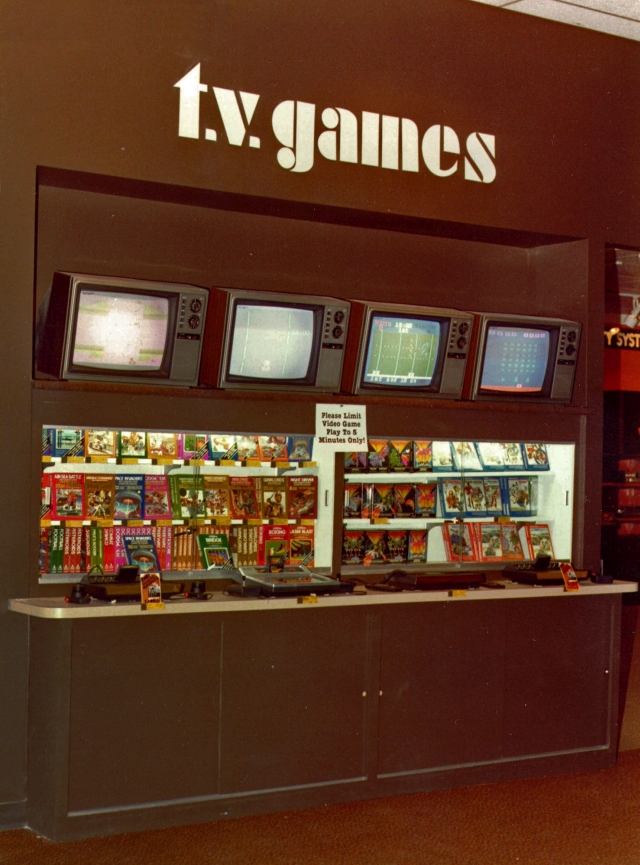 Circuit City
Richmond, VA (1981)
This photo of a Circuit City sale display was shared by Vintage Richmond over ten years ago, and it remains one of the earliest retail pictures from the second generation of game consoles that I've come across.  The presence of games like Kaboom, Warlords and Pelé's Soccer for the Atari 2600 in the game case suggests that this photo was taken sometime in 1981, but I wasn't able to narrow it down any closer than that.
The display shows a countertop where consoles and controllers have been hooked up so that shoppers could try out some of the games (for five minutes only) on one of the CRT televisions on the shelf above.  These consoles include two Atari 2600 six switch models book-ending an Odyssey 2 and an Intellivision.  Behind the countertop and below the televisions is a case for games that were available for sale. including Fishing Derby, Video Pinball, Missile Command, Space Invaders, Dodge 'Em, Night Driver, Asteroids, Combat, Freeway and Laser Blast among others.

I tried to find an advertisement for the Midnight Madness sale in Richmond that was shown in this picture, but the closest I could get was this ad for a similar sale in North Carolina.  While there are no game consoles shown in this ad, I had to share it for this graphic alone.

The idea of a bunch of shoppers gathered around a store employee demonstrating a microwave oven amuses me to no end, but it's really not very surprising for the time.  Microwaves only became affordable for the average person in the late 70's, so it's probable that some of the people in the store for this sale might not have actually ever used one.  But enough about microwaves... back to the games.

The sign that shows the price of the Atari 2600 in the photo is a bit blurry, but this Circuit City ad from October 1981 shows that it was on sale for $134.97, which was $25 off of their normal price.  This was about three and a half years into the console's life cycle.  The people who read this ad when it originally ran were still five months away from Atari's highly disappointing home port of Pac-Man and over a year away from The Video Game Crash of 1983 that resulted from a flood of poor games, so Atari was still riding high.  Unfortunately, it was a presence in the industry that they would never come close to again.
It's interesting to see that the Atari 2600 was being marketed as a programmable video game system.  It's true - you could buy the BASIC Programming cartridge.  The programming capabilities were extremely limited, even for 1981, but it was a way for Atari and their retail partners to market the console to the folks who were not early adopters to the phenomenon of "TV Games".