Trying To Stay One Step Ahead Of Whatever Tormented You 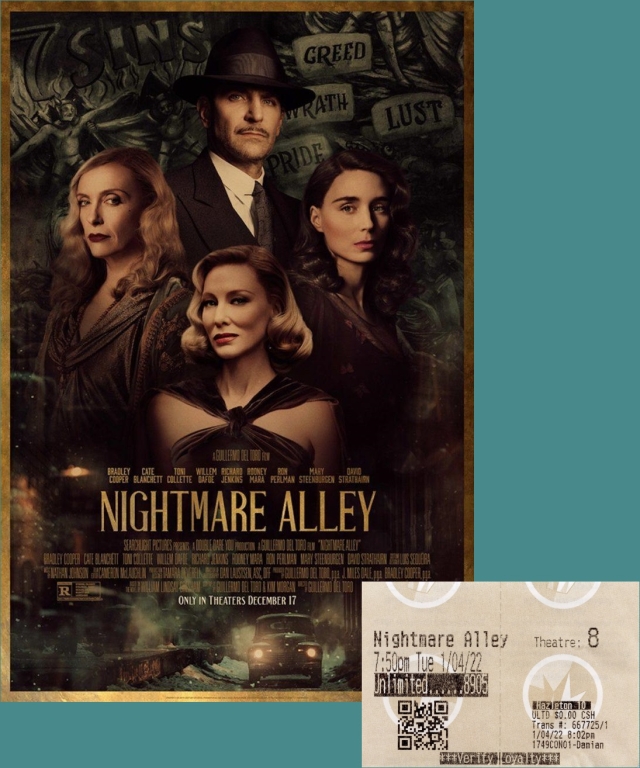 Nightmare Alley
Searchlight Pictures (2021)
This is the first movie that I saw in 2022, and it's the kind of remake that I can completely get behind.  The original Nightmare Alley premiered in 1947 and was based on the William Lindsay Gresham novel of the same name that came out the year before.  I've never watched the original film or read the book, nor have I met anyone who has, and that's precisely what makes it such a perfect film to remake.  Instead of making a film to cash in on a well-known intellectual property, director Guillermo del Toro has breathed new life into a story from 75 years ago.
Unfortunately, the box office returns show why this is a rarity.  Despite receiving positive reviews, breathtaking visuals, and incredible performances from Bradley Cooper and Cate Blanchett, it has only earned an estimated $9 million at the box office for a film that cost $60 million to produce.
It's a damn shame that more people didn't go to see this.  I won't go as far as Stephen Colbert who called it "the greatest modern noir film", but it's an excellent movie that is worth your time and attention.  The last ten minutes were a bit rushed, in my opinion, and I think they could have done more to explain the Dr. Ritter character, but neither of those things take away from what was a great story that pulls you into the world of carnivals, con men and the United States during World War II.