Eating Before Concert Not Recommended 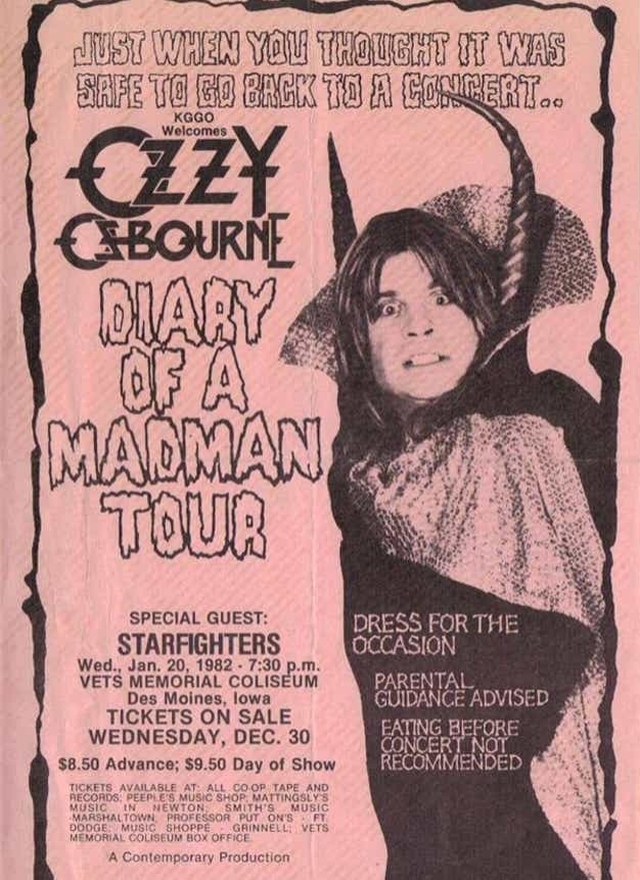 Ozzy Osbourne: Diary Of A Madman Tour Flyer
Veterans Memorial Coliseum - Des Moines, IA
The 15th show in the North American leg of the Diary Of A Madman tour took place 40 years ago tonight.  It's a concert that has gone down in infamy as the night when Ozzy bit the head off of a bat.

The story has been retold so many times that it can be difficult to separate fact from fiction.  In the booklet that came with the 2002 CD re-release of Diary Of A Madman, it is claimed that the bat was not only alive, but that it had bitten Ozzy.  However, that was not the case according to the person who claimed to have thrown the bat on stage.  Mark Neal was 17 years old when he attended the concert, and he claimed that the bat had been dead for at about two weeks and had been decaying when he sealed it in a plastic bag and snuck it into the show.
Regardless of the state the bat was in at the start of the show, it was missing its head by the end, and Ozzy paid a visit to a local medical facility to receive rabies and tetanus shots.  The incident has been talked about ever since, and will probably continue to be discussed for many years after we have all followed that bat into the next world.