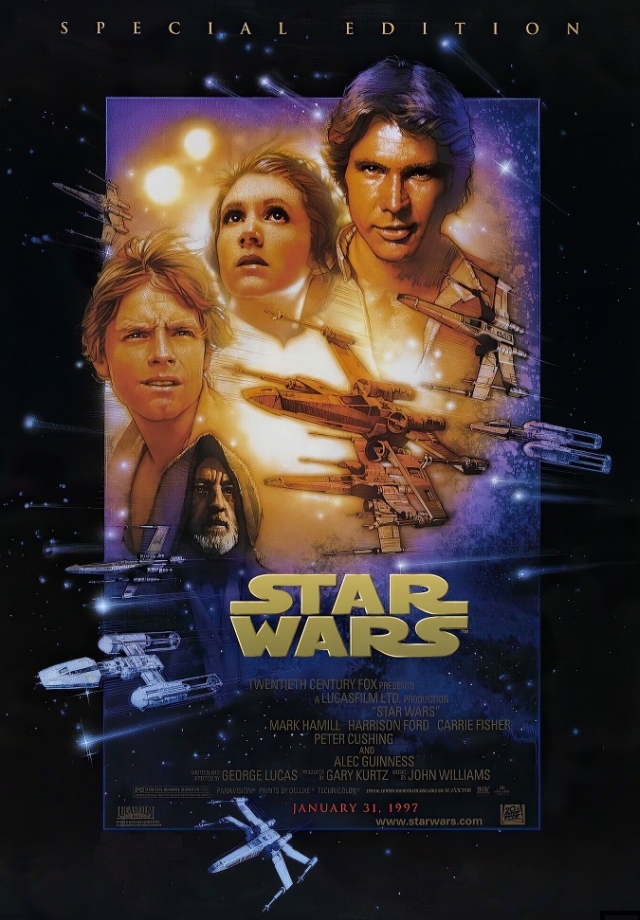 Star Wars: A New Hope - Special Edition
20th Century Fox (1997)
Twenty five years ago today, the controversial Special Edition of the first Star Wars movie premiered in theaters across the United States.  There were a number of changes made, including the addition of deleted scenes and computer effects that were not possible in 1977.  A few of the changes seemed alright at the time, like the addition of a scene of Jabba The Hutt confronting Han Solo on Tatooine.  However, in retrospect, the late 90's CGI stands out like a sore thumb when surrounded by the brilliant practical effects that helped draw fans into the Star Wars universe in the first place.

The change that is universally despised among Star Wars fans was the addition of Greedo shooting at Han Solo first, and an embarrassingly poor digital manipulation of Harrison Ford to make him look like his head slid to the left to avoid being shot before he fires his own blaster at Greedo.  Not only does it look terrible, but it ruins the entire scene in a misguided attempt to make Solo appear to be a "good guy" who would only fire in self-defense.  Fan backlash resulted in a flood of stickers, t-shirts and other merchandise with the words "Han Shot First".  The phrase became the late 90's equivalent of a viral hashtag many years before social media or hashtags existed.

Star Wars was originally released three years before I was born, so the 1997 Special Edition was my first time seeing it on the big screen, at the Church Hill Cinema in Hazleton.  I was sixteen years old at the time, and I was too focused on the Jabba The Hutt scene to even notice the alterations to the Greedo scene.  It was only later on when I watched them on VHS that the added special effects felt off to me.  I'll probably never choose to watch the Special Edition over the original 1977 release, but I'm still thankful that it exists because it gave me the opportunity to see Star Wars in theaters.