Turtles At The Twin 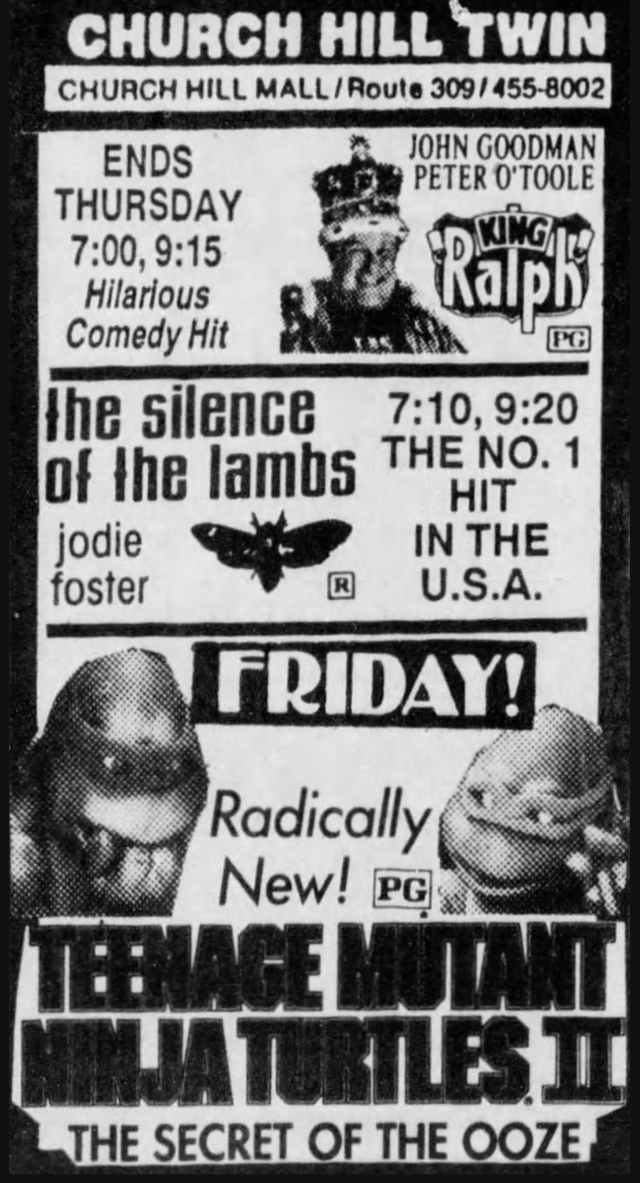 Teenage Mutant Ninja Turtles II: The Secret Of The Ooze
Church Hill Cinema - Hazleton, PA (1991)
The sequel to the Teenage Mutant Ninja Turtles movie made its theatrical debut 30 years ago today - less than one year after the release of the first film.  Like its predecessor, my grandfather took me to see it at the Church Hill Cinema.
When I look back on my childhood, it really is incredible how many of my happiest moments directly involve my grandfather.  I can't imagine who I would have been if I didn't have his positive influence in my life.  I am very far from a perfect person, but I don't think it's an exaggeration to say that any good that anyone sees in me is a direct result of having him in my life.  As I've gotten older, I see more of his personality and way of thinking in myself.  There are times when I'll say something and before the sentence is even finished, I realize that it's something he probably would have said.

There were three places in the area where I saw most of my theatrical movies before the age of 20: the Key Theater in West Hazleton, the Laurel Drive In in Hazleton, and the Church Hill Cinema on Route 309 just outside of the Church Hill Mall.
The Church Hill Cinema opened in 1969 and remained in operation until the year 2000 when it was put out of business by the new Hoyt Cinema (now the Regal Cinema) at the Laurel Mall.  They tried to compete for a little while, but they weren't able to hold out for too long.  The building is still there today, but it's split between the Jolie Health & Beauty Academy and the Jumbo China Buffet.
This is the only color photo I've ever been able to find of the theater.  It must have been taken in 1990, because Nightbreed was released on February 16th of that year.  Glory and The Little Mermaid came out in 1989, but it wasn't unusual for the Church Hill Cinema to show one current film along with one or more late run movies from earlier that year or from the year before.