Of All The Pyramids In All The World, You Had To Walk Into Mine 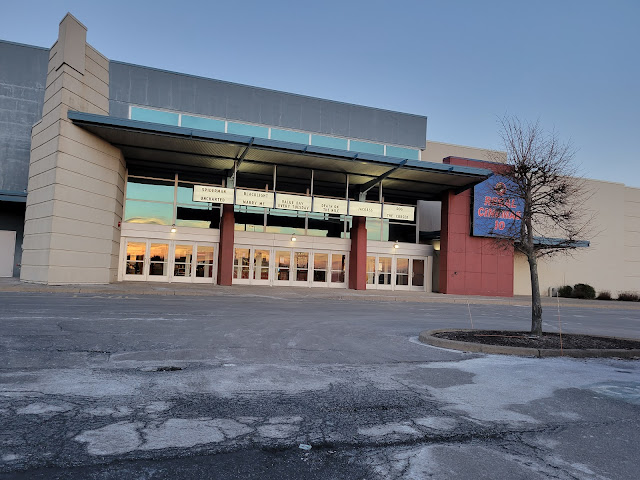 Regal Cinemas 10
Hazleton, PA
We recently got to see Death On The Nile and Uncharted on the big screen.  While I don't recall any nudity taking place in either of these movies, there was a little bit to be found in the parking lot.  It was on the little white rectangle at the bottom center of the photo above.  Here is a closer look: 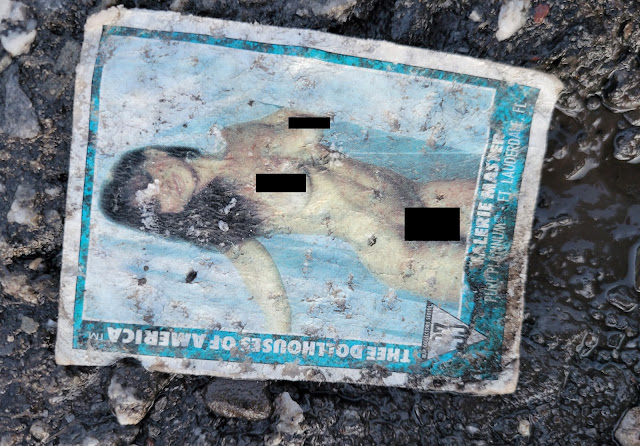 Mother nature did a pretty good job of censoring this picture, but better safe than having to be sorry to your content host.  With the exception of the Vegas Strip, I can't think of a time that I randomly stumbled across something like this laying in the streets.  I did some research on Thee Dollhouse of America and learned that this is from a series of trading cards that were released in 1993.  I'm not sure if this card has been randomly blowing across the surface of the earth for the past 29 years, or if some random person kept it in their pocket only to lose it outside of the Regal Cinema.  In either case, I would estimate that Valerie Master is in her early 50's today.  Not sure if her goal was to make it into the movies, but in the case of her trading card, she came up about 50 feet short of the front door. 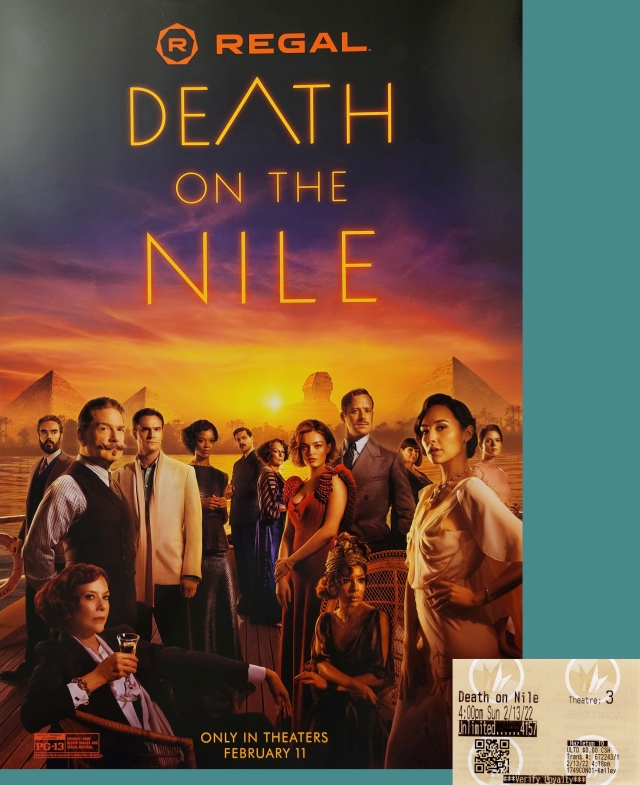 Death On The Nile
20th Century Studios (2022)
There has been a trend in recent years of witty, sarcastic murder mystery films with an ensemble cast, and it's a trend that I am fully on board with.  The preview of Death On The Nile reminded me a little bit of Knives Out, but it plays things more seriously.  This is understandable for a movie that's based on an Agatnha Christie novel that was published 85 years ago.
This is a sequel to the 2017 film Murder On The Orient Express, which also stars Kenneth Branagh as Hercule Poirot and Tom Bateman as Bouc.  Mr. Branagh also directed both films, which is pretty damn impressive if you ask me.  What I know about directing a major motion picture could fit on a matchbook cover, but I do know that it's a hell of a lot of work.
I haven't read any of Ms. Christie's books.  I've also not seen any of the film adaptations of her work before this, including Murder On The Orient Express.  The closest I've come to any of her stories is line of dialogue from Chasing Amy when Joey Lauren Adams yells "you didn't have to go playing Hercule fucking Poirot" at Ben Affleck, so the only expectations I had going into this was from the trailer that we saw at Regal earlier this year.  Having said all that, this was a damn good murder mystery.  It had a lot of humor and heart while still taking the subject matter seriously.  It was beautifully filmed, and everyone delivered a great performance.  I was especially impressed by Russell Brand as the ex-fiance, Linus Windlesham.  He melted into the character so well that I honestly didn't even recognize him.
It looks like Death Of The Nile hasn't made back its budget yet, but I can't imagine why.  Maybe I'm just an easy guy to please when it comes to movies, but I thought it was really good and I'd recommend to it just about anyone of any age. 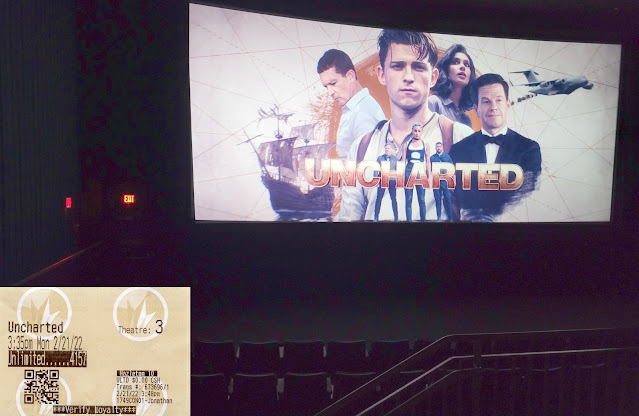 Uncharted
Sony Pictures (2022)
My days of being an active gamer who kept current with the industry ended with the Sega Dreamcast.  Everything that came after that has pretty much been a glorified retro machine for me.  I generally pick up all of the retro compilations and the virtual console games that I'm interested in, and once in a while I'll stumble across something current that I enjoy, but those tend to be a Metroidvania, platform, JRPG or puzzle game, and the vast majority of those are on a Nintendo console.  Breath Of The Wild is about as modern as I get.
Eventually, I picked up a used Playstation 2 and 3 console and a pile of pre-owned games, but this was many years after they first came out.  I haven't owned an XBox since the first one, and I didn't even really want that one.  My ex surprised me with it back in 2001 and I played it because I didn't want her to think I didn't appreciate it, but I would guess that I played it maybe a dozen times in the 20 years since she and I broke up (give or take a few months).  I have no interest in owning any of the Microsoft consoles or a Playstation 4 or 5.  Maybe that will change one day, but I doubt it.  So, now that I've rambled out all of that, you'll understand that until the Sony Interactive Entertainment clip played at the start of this movie, I had no idea that this movie was based on a video game.
I'm not sure how good the Uncharted games are, so I can't speak to how accurate the plot of the film is to the story that's told in the games.  However, as an entity completely separate from the games, the Uncharted movie is a hell of a lot of fun.  This is an expression that I tend to overuse, especially with action movies, but it's the best way I can think of to describe something like this.  If you're expecting realism or an unforgettable classic, you're probably going to nitpick all of the fun out of it.  However, if you can suspend your disbelief and silence your inner Roger Ebert long enough to get to the end credits, you're going to have a good time.  You might have a more critical perspective if it doesn't match your expectations from playing the video games, but that wasn't a problem for me.  Tom Holland and Mark Wahlberg play off of each other well and deliver good performances, and Antonio Banderas, Sophia Ali and Tati Gabrielle each do a great job with their badass characters.  If you enjoy movies like National Treasure, you'll have a good time watching this too.
It would be a massive understatement to say that Uncharted has a post-credits teaser.  It's practically a trailer for a sequel, so if this movie is financially successful, I think it's a safe bet that it's going to get turned into a franchise.