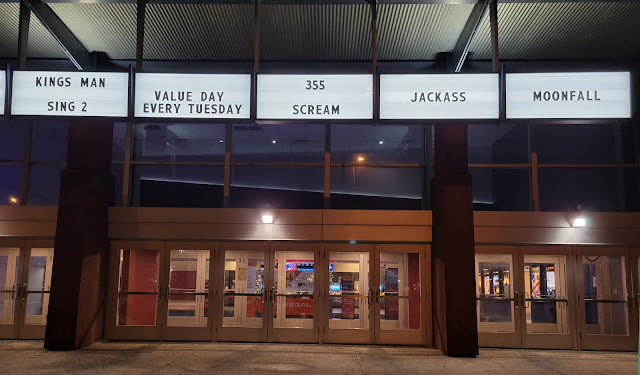 Since I spent practically the entire spring and summer gushing about the Mahoning Drive-In Theater, it's only right that I try to give equal time to the Regal Unlimited pass.  It really is a pretty amazing deal.  We've been to the theater so many times over the past two years that it almost feels like an extension of our living room.  In fact, we've seen every movie on the marquee in this photo, and we've enjoyed all of them.
The only thing that the last three movies I saw have in common is that I probably never would have seen them on the big screen if not for the Unlimited deal, but in all three cases, I'm very glad that I did. 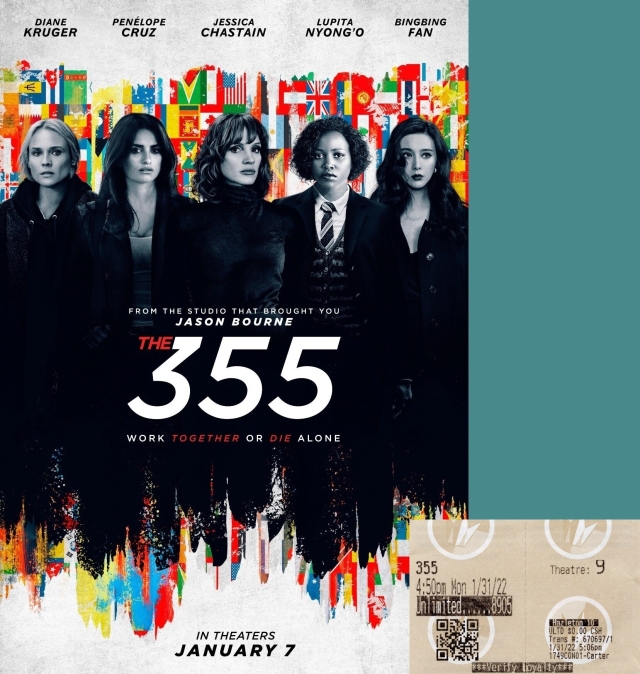 The 355
Universal Pictures (2022)
The previews for this looked pretty good, and they thankfully didn't give away too much of the plot like so many of them seem to do these days.  The 355 is an action flick about a group of female government agents who have been brought together by circumstance to retrieve a pocket-sized electronic device that can take control of any system in the world.  It's a smarter and funnier Charlie's Angels with a female empowerment message.  I'm happy to say that with the exception of one or two corny lines of dialogue, that message comes across naturally and not too heavy handed.  The cast has good chemistry and delivers a strong performance - especially Penélope Cruz and Lupita Nyong'o.  The story ends in a way to set it up for potential sequels, but I'm not sure if that's going to happen.  It hasn't been too well-received by critics, and it has only earned back less than $25 million of it's $40 to $75 million dollar budget.  It's a shame, because this actually could be a pretty good franchise if folks would give it a shot. 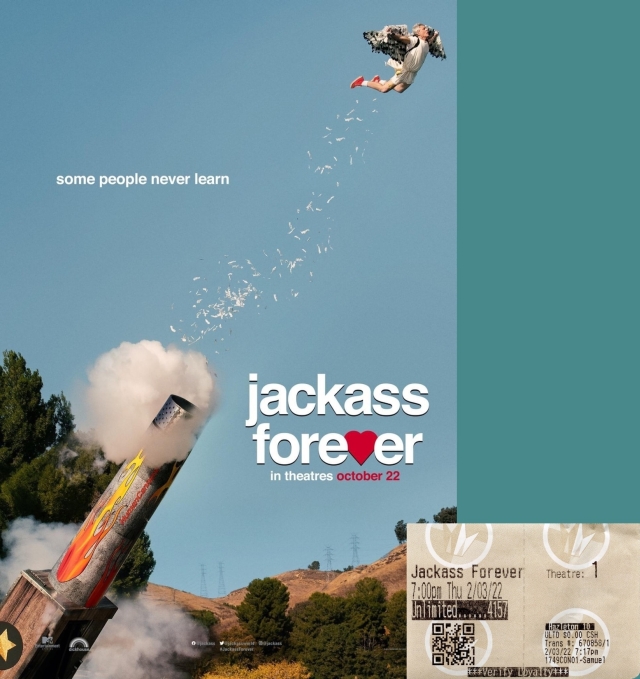 Jackass Forever
Paramount Pictures (2022)
I didn't watch Jackass too much when it was on tv.  This is partially because I was annoyed that MTV  stopped showing music videos and had come pretty close to being a 24 hour reality show network, and partially because it's not really my type of humor.  I did see it a few times though and I saw the first movie back in 2002, and I'd be lying if I said it didn't make me laugh. 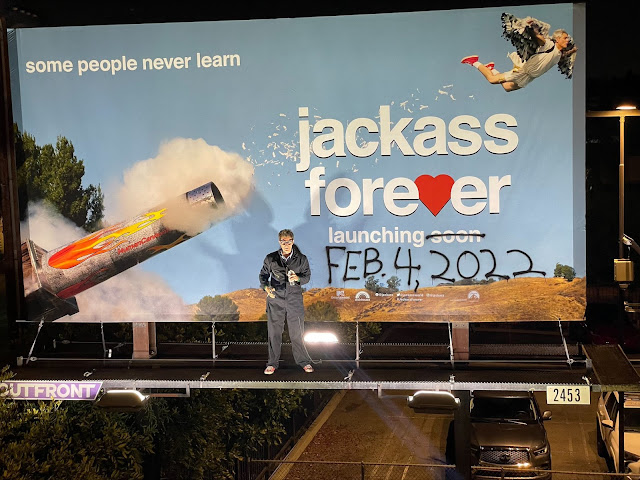 Over the past year and a half, we've seen the preview to Jackass Forever at the Regal a lot.  It was originally scheduled to be released on March 5th, 2021.  Then it got delayed July 2nd.  Then it got delayed again to October 22nd.  Finally, it was delayed a fourth time and was set to premier nationwide this past Friday.  Each time it got delayed, the trailer got put back into the rotation of previews that played at the Regal, and because we saw so many movies since signing up for the Regal Unlimited deal, we must have watched the Jackass Forever trailer at least twenty times.
If I'm being completely honest, I had no intention of going to see this movie the first time I saw the trailer... or the second... or the third.  However, by the time it actually got to the theater, I had a change of heart.  It's been a rough few years in the world since the pandemic began, and it doesn't do me a bit of good to take myself so seriously that I skip out on the new Jackass movie.  So, I said to hell with it.  I'm going to go and let myself laugh for a few hours, and I'm glad that I did.  It was really funny, and I had a great time.  As an added bonus, because I went to see the first screening this past Thursday, there was some bonus content after the credits. 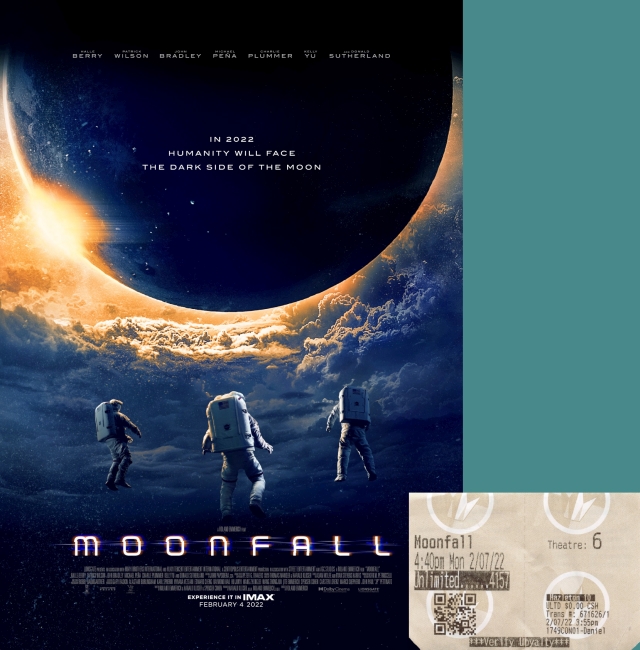 Moonfall
Lionsgate (2022)
This is a $140 million dollar drive-in science fiction flick from the director that brought you Independence Day and The Day After Tomorrow.  Naturally, it's getting destroyed by the critics, and the audience scores on Rotten Tomatoes haven't been too much kinder, but this is pure gold for me, and I expect that it's something that the MutantFam is going to rave about.  It's cheesy in all the right ways with a beautifully absurd plot that you're either going to love or hate.  It reminded me of Dario Argento's Demons in that way.  It builds one layer of insanity on top of another... just when you think it can't get more outlandish, it tops itself, and then it does it again, and again. 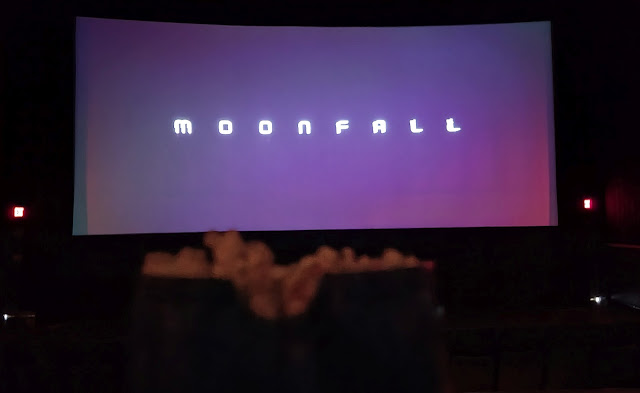 Director Roland Emmerich has said that if Moonfall is successful, he wants to turn it into a trilogy of movies which star John Bradley promised would be "even more batshit crazy than the first".  I hope it does, because I can't possibly imagine what he could do to top this.  Batshit crazy is the perfect description for Moonfall, and I mean that as the highest of complements.  It's not for everybody, but it's definitely for me!
That's exactly what I'm talking about when I speak so highly of the Regal Unlimited deal.  If I just went by the preview or the poster, I wouldn't have gone to see this.  Hell, I may not have gotten around to it for years, if I ever did at all.  When I started paying one price to see as much as I wanted, it took away the possibility of feeling like I wasted money to see something that I might not enjoy, and it opened the door to discovering a lot of really great movies.