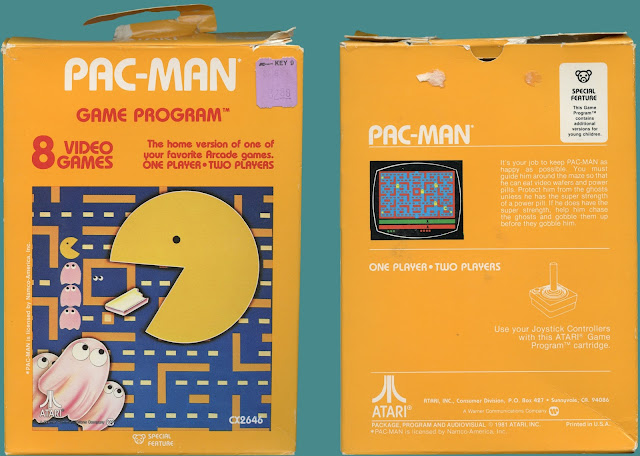 Pac Man
Atari 2600 (1982)
One of the biggest home video game releases of all time took place forty years ago today when Pac-Man went on sale for the Atari 2600 console.  The home port was programmed by Tod Frye, who was under both time and resource constraints to have a cartridge in stores in time for the first quarter of 1982.

The finished product was seen by most gamers as a disappointment and has been cited as one of the factors that led to the video game crash of 1983.  However, the massive success of Pac-Man at the arcade led to sales of over 8 million copies by the end of the decade, which makes it the highest selling Atari 2600 cartridge ever produced.  Although it doesn't even crack the top 50 these days, Pac-Man for the Atari 2600 was the best selling video game of all-time.

Although the video game crash of 1983 was terrible for the industry, it could not have come at a better time for a kid that was born in 1980.  I was given an Atari 2600 console and a pile of games for Christmas in 1984.  Just a few years earlier, new games would have cost somewhere in the neighborhood of $35 each, but they were being sold for as low as a dollar by the 1984 holiday season.
Pac Man on the 2600 may have been disappointing for gamers who expected something that resembled the arcade experience, but for a four year old little boy in West Hazleton back in 1984, it was the best Christmas present ever.  I played the heck out of Pac Man, and dozens of other games that my dad brought home.  Today, I can look back and see why older gamers were disappointed at the time - especially the ones who paid full price.  However, from a personal perspective, I don't think I ever powered on my Atari 2600 and felt anything but pure joy.