Vengeance Won’t Change The Past 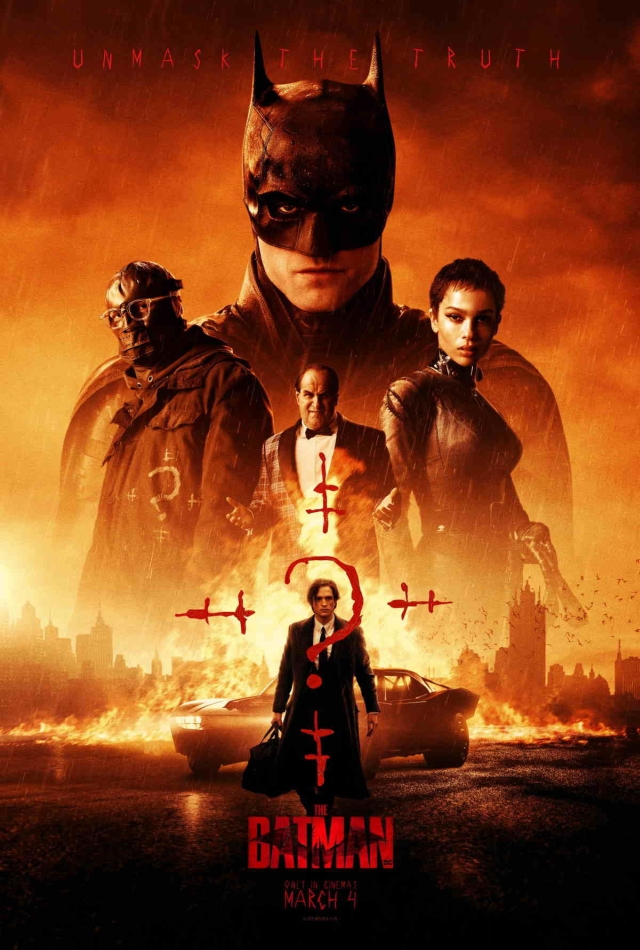 The Batman
Warner Bros Pictures (2022)
Before I say anything about The Batman, I'd like to share a little but of my own personal history with this character.  If a middle-aged nerd can't ramble in his blog about Batman and breakfast nuggets, where the hell can he? 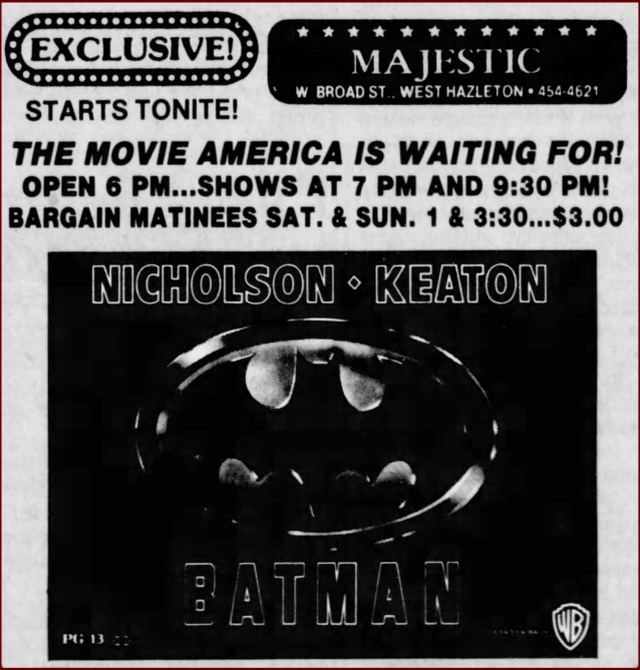 I'm 41 years old, and I've seen a hell of a lot of Batman in my life.  When I was very young, I watched reruns of the Adam West series on television.  I even got to see the 1966 film, Batman: The Movie on one of the pay channel free preview weekends.  I turned nine years old in the summer of 1989 when Batman was being marketed more predominantly than any comic book character had ever been before (or since).  My grandfather brought me to The Majestic in West Hazleton (now the Cinema & Drafthouse) to see the Michael Keaton/Jack Nicholson Batman on the big screen, and I was blown away.  It was the most exciting movie experience of my life up to that point, and just like every kid I knew in school at the time, my Christmas wish list that year was filled top to bottom with Batman toys.  That was pretty much where my interest in Batman had peaked.

I didn't see Batman Returns until it came out on home video, and while I have grown to appreciate it a lot more in my adult life, the 12-year-old me wasn't even close to as hyped up for it as I was the first movie.  It's dark and beautiful, but even though I like it more today than I did back in 1992, I still think the first movie is the better film of the two.
The next movie in the series was Batman Forever.  It came out a couple of weeks before I turned 15, and like its predecessor, I didn't see it on the big screen.  However, while I enjoyed Batman Returns as a kid and enjoy it even more today, the same cannot be said for Batman Forever.  I thought it was a lousy movie then, and my opinions of it have not improved with time.  Tommy Lee Jones and Jim Carey were just plain ridiculous.  It felt like they were trying to combine the campy, cornball villains of the Adam West series with the million dollar production of the movies.  That sort of villain was fun and charming in the old 60's tv series, but it was annoying to see on the big screen.  I still believe that the only good thing to ever come out of Batman Forever was its soundtrack. 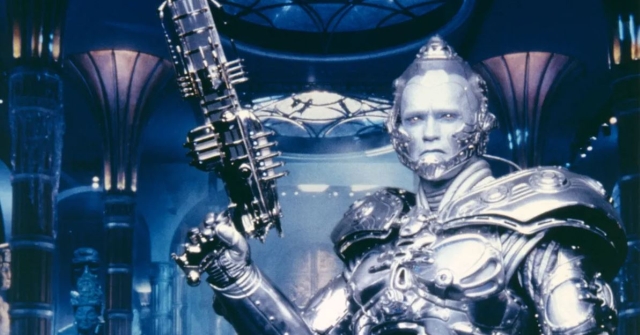 To this day, I still have not watched Batman & Robin.  I'm a big fan of George Clooney, Arnold Schwarzenegger, Uma Thurman and Alicia Silverstone, but after seeing Batman Forever and then seeing the Batman & Robin trailer with all of those terrible puns, I had absolutely no interest in seeing the 1997 film.  I wouldn't be a dick about it if any of my friends ever wanted me to watch it with them for some reason, but there is pretty close to zero chance that I will ever sit down and watch it on my own.

Next came The Dark Knight Trilogy, starting with Batman Begins in 2005.  They're a hell of a lot better than Batman Forever, but something about them never clicked with me and I have no idea why that is.  I know this is going to sound like I'm ripping on these movies, but that's not at all my intention.  I saw Batman Begins, The Dark Knight and The Dark Knight Rises in theaters and I enjoyed all three of them (especially The Dark Knight), but I don't think I've ever watched any of them since.  When I'm in the mood to watch a Batman flick, I always go back to the 1989 movie that I fell in love with as a kid.  One of these days, I'll have to sit down and have a Dark Knight Trilogy marathon, but even as I type that, I'm thinking "eh... not this weekend". 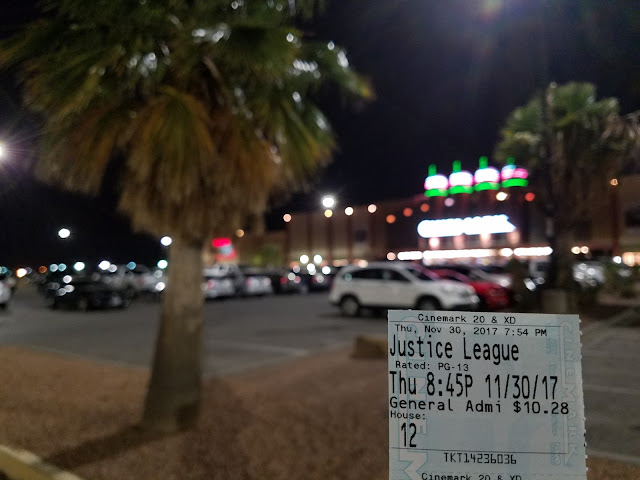 Justice League was the next Batman movie that I saw in theaters.  I didn't really have too much interest in it, but I was on a business trip in El Paso, and there was a Cinemark not too far from my hotel, so I thought I'd go see a movie and it was the only thing that was playing that looked good to me at the time.  In fairness to the filmmakers, I was tired and stressed out and probably still suffering from a little jet lag, but I fell asleep in my seat about a half hour into the movie, and I woke up about five minutes before the credits.  From what I'm told, I didn't miss anything. 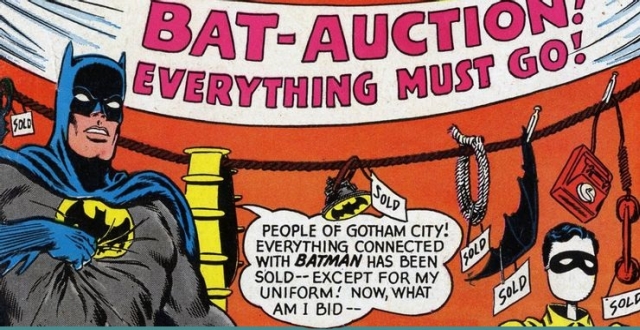 There's a lot of Batman material that I'm skipping over here - some of which I've seen and some that I haven't.  I'd would be interested to know how many combined hours of Batman movies, cartoons and television shows have been produced in my lifetime.  There's also an increasing amount of Batman-adjacent material out there, including Catwoman, Joker, Gotham, Suicide Squad, Birds Of Prey and plenty of others... not to mention all of the comic books, video games, and other media that's been produced in my lifetime.
Maybe you'll understand where I'm coming from and maybe you won't, but after seeing this character countless times over the past four decades, I was not too excited to see The Batman.  My first reaction when I learned that there was going to be another Batman film was to think "Oh, come on!  How many different ways can there be to tell the same old story!".  But as worn out as I have grown to be with this character, I had every intention of going to see it.  What the hell - it's not like it was going to cost me anything extra with the Regal Unlimited deal, so why wouldn't I go see it?  The worst thing that could happen is that I fall asleep like I did at Justice League.
With this in mind, I skipped out on opening weekend and went to see a 4:00 screening of The Batman on Monday after the crowds had died down a little bit (or whatever passes for a crowd in my little coal-dust covered corner of Northeast PA).  I settled into my seat at the Regal as a hopeful skeptic.  That was not my mindset by the time the credits rolled. 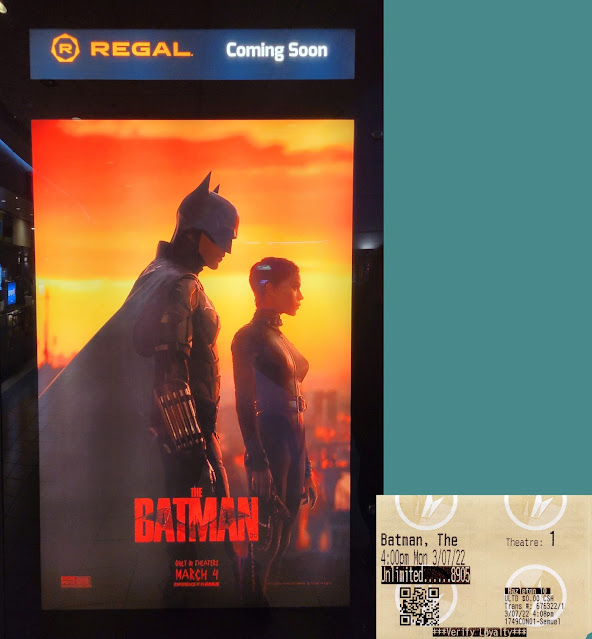 The tone of The Batman reminded me very much of the 2019 film Joker, and if that's the direction that DC Films are committed to taking with the Batman character, I can say one thing for certain: I will be excited when the next Batman movie hits theaters.
This movie is brilliant!  Absolutely brilliant!  It's the most realistic version of a Batman story that I've ever seen.  Bruce Wayne isn't a suave billionaire playboy who broods once in a while.  He's a psychological mess of a man who saw his parents get murdered when he was a child and whose only coping mechanism is to dress up in a bat costume to act as a vigilante to take vengeance on others.  The Riddler isn't a goofy man in spandex dancing around and engaging in dopey comic book banter.  He's another psychologically scarred man who is seeking his own version of justice on a world that wasn't fair to him.  The world in this film is a corrupt and dangerous place, and no one truly has their shit together.
The fight scenes are more realistic that I've seen in any other Batman movie.  He's not an unstoppable superhuman.  He's just a guy who learned how to fight and can afford good weapons and body armor... and while his gear is very good, it isn't ridiculous or garish.  The most advanced tech he uses seemed to me like something that very well might exist before the end of the decade, if it doesn't already.  This gives Batman an advantage, but he's vulnerable and could get his ass kicked just like anybody else.  Similarly, Catwoman isn't a bodysuit wearing sexpot making cat puns and meowing.  She's a strong woman who's seeking her own vengeance.  The Penguin isn't a egg-shaped cartoon character who quacks, flaps his arms and has actual penguins marching around him.  He's a mobster and a drug dealer.  Everything about this movie is done with care and consideration to tell a story that you could almost see really happening.  It is our world with the volume turned ever so slightly higher.
The piano music throughout the film is beautiful and haunting, as is the use of Something In The Way, which is my favorite song off of the Nevermind album and one of my favorite songs from Nirvana's catalog.  Robert Pattinson is incredible as both Bruce Wayne and Batman, and if you can't see past the fact that he was in the Twilight movies, it's your loss.  Zoë Kravitz, Paul Dano, and Colin Farrell gave the best performances as Catwoman, The Riddler and The Penguin that I have ever seen, and there is no close second.
Simply put, this film makes every other Batman movie I've ever watched feel childish in comparison... even my beloved 1989 film... even the critically acclaimed The Dark Knight.  This is a movie that is grounded in reality, and it has a message that's worth hearing.  I hesitate to even call it a superhero movie.  This is a action-based crime drama, and a damn good one.  Go see it on the big screen.  You'll be glad that you did.