It's Not Making Me Melt 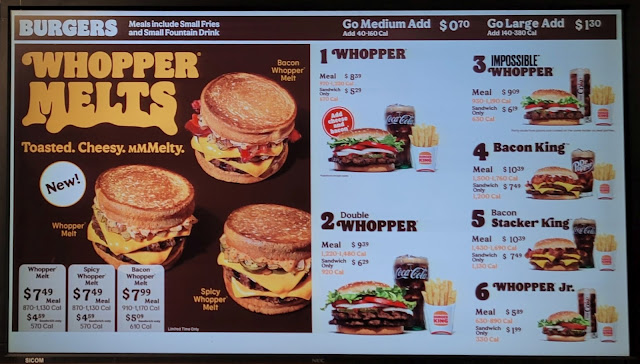 Whopper Melts
Burger King (2022)
Burger King has always been my favorite fast food restaurant, so I had to give their newest menu item a try.  There are three different versions available: the standard Whopper Melt, the Bacon Whopper Melt, and the Spicy Whopper Melt.  I tried the one with bacon, and I regret to say that it's pretty underwhelming. 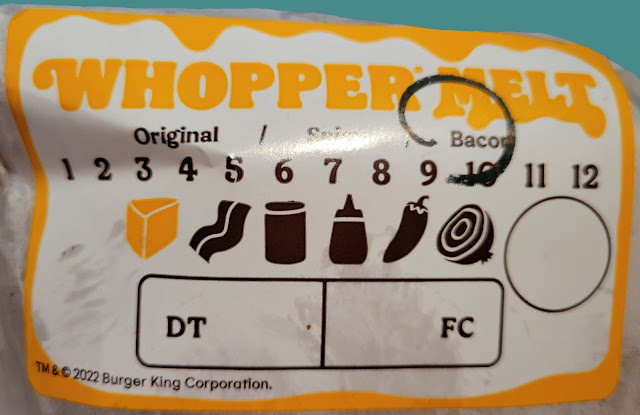 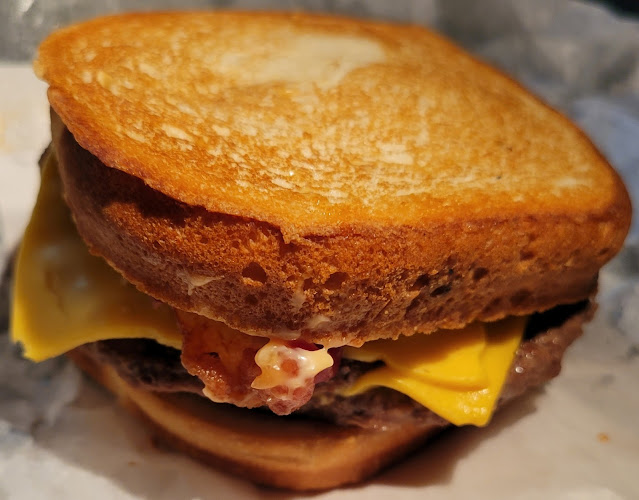 The website describes the new Whopper Melt burgers as "two slices of toast, layered with ¼. lb of flame-grilled beef, melty American cheese, caramelized onions and stacker sauce".
I'm not sure why the Burger King marketing department thinks that two slices of toast are an improvement over a bun, but it isn't.  Two slices of toast are what I use at home when I want to make a cheeseburger, but I've run out of hamburger buns and I'm too lazy to run out to the store to buy a new pack.  To be honest, it didn't have a significantly different taste or texture than a regular Burger King bun, so the best I can say about them is that the only thing they do is to make the burger look ugly and thrown together.
It's supposed to be topped with caramelized onions and stacker sauce.  I'm not sure if they skimped on the toppings, but I didn't taste the onions or the sauce, and the "melty American cheese" is the same thing that's been on every Whopper with Cheese that I've eaten over the past four decades.  It's not a bad sandwich, but it isn't significantly different than any other Whopper I've ever had, and the few little differences that it does have are not an improvement over the original Whopper concept.  The only thing that made it different was the bacon, and you can pay the upcharge to have bacon added to anything.
Burger King's gimmick over the past few years has been to modify the bun, and I really wish they would give it a rest.  They tried sourdough last year, and now they've pretty much resorted to using toasted bread ends for this thing.  Folks... all you're going to do by changing the bun is to screw up the burger.  Just give us a regular bun and put something tasty inside, like maybe grilled onions and mushrooms or a fried egg.  Maybe try out different kinds of cheese like pepperjack or provolone, or maybe some unique condiments like an avocado sauce or pesto.  Even better, take the Rodeo Burger that's already on the menu and beef it up for the Whopper family.  There got to have been at least a dozen better ideas that y'all came up with in the meeting where this thing was pitched.  Go with one of those other ideas instead, whatever they are.