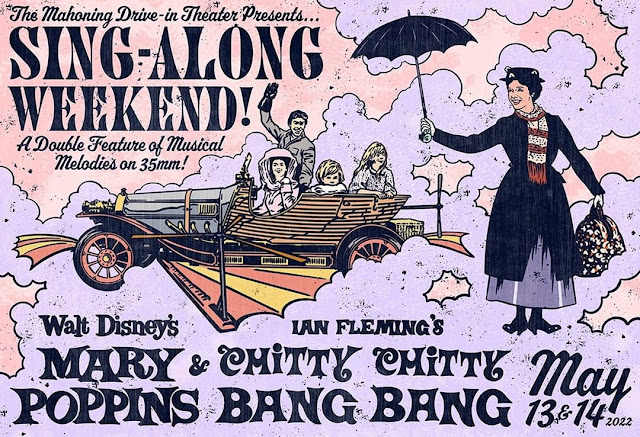 Sing-Along Weekend
Mary Poppins / Chitty Chitty Bang Bang
Mahoning Drive-In Theater - Lehighton, PA
So, the official name of this double feature at the Mahoning is the Sing-Along Weekend, but I kind of like the unofficial title.  Both movies feature one of my favorite comedy actors of all time, the legendary Dick Van Dyke, so when Virgil promoted the upcoming shows on the radio during the pre-show for Predator, it was referred to as the Double Dick Weekend.  The fact that it refers to such wholesome family movies as Mary Poppins and Chitty Chitty Bang Bang make it all the better. 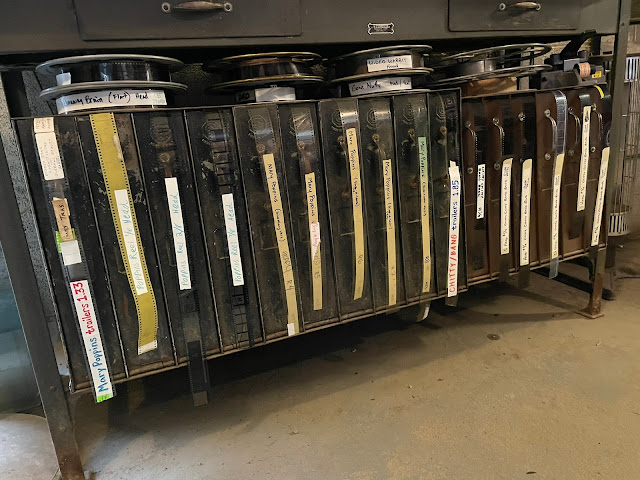 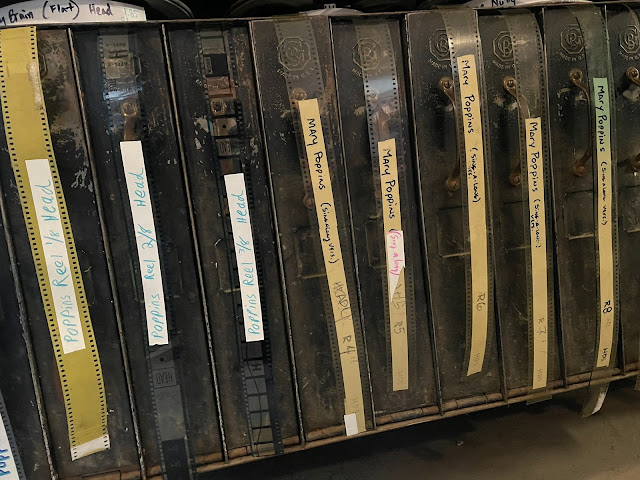 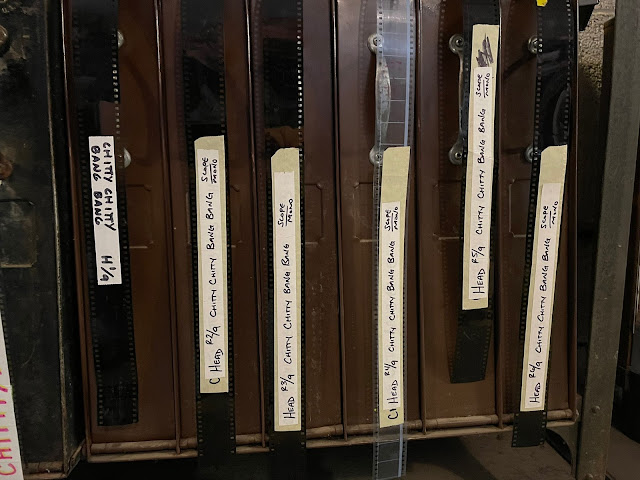 This is one of the weekends at the drive-in that my wife was especially looking forward to because Mary Poppins was one of her favorite films when she was growing up.  I'm honestly not sure if I ever saw the entire movie from beginning to end before last night.  I know I had seen clips of it, and I've listened to the music from the movie a lot of times when I was a kid because my grandparents would play the record for me when I came over to visit on the weekend, usually with my grandmother singing along to Chim Chim Cher-ee. 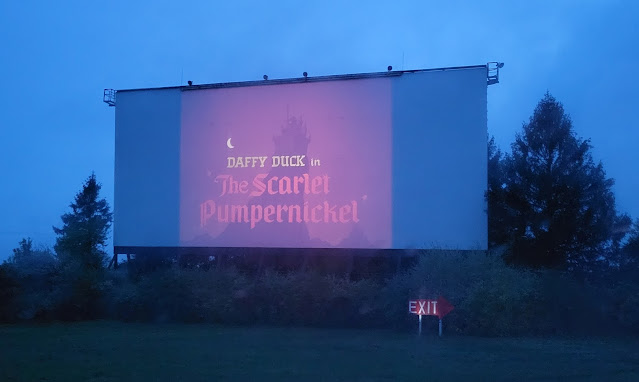 Before Mary Poppins, they screened a 35mm print of one of the greatest Daffy Duck cartoons of all time - The Scarlet Pumpernickel.  This 1950 Loony Tunes short is a true masterpiece of animation history with nearly every character in the cartoon being performed by the legendary Mel Blanc.  Following this they showed the theatrical trailer for Snow White, Bambi and Peter Pan. 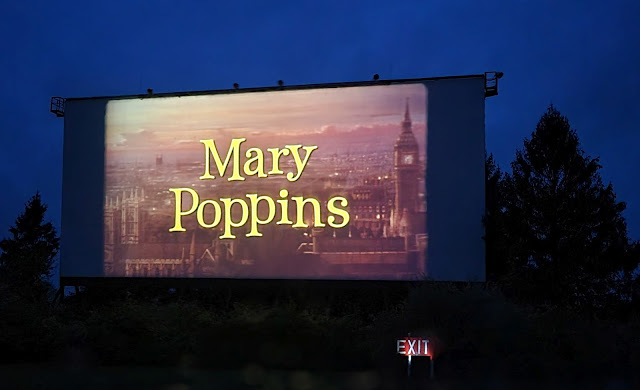 Mary Poppins was the highest grossing film of 1964, and at the time of its release, it was the highest grossing Disney movie of all time.  It was critically acclaimed with thirteen Academy Awards nominations (including Best Picture), five of which it won, including Best Original Musical Score, Best Original Song (Chim Chim Cher-ee), and Best Actress (Julie Andrews).  It brilliantly blends live action and animation in a way that few other films could match to this day.

There was a short intermission between the two films with two 1942 Goofy shorts: How To Swim and How To Play Baseball.  Disney's series of instructional videos are among the greatest animated shorts ever made, and I'm always very happy to see them.  They're one of the few things that could make a 5 year old and a 95 year old laugh, and in most cases, they'd be laughing for the same reason.  When a future civilization digs up the entertainment produced in our time, I hope that they uncover these because they are truly one of the high points of our culture. 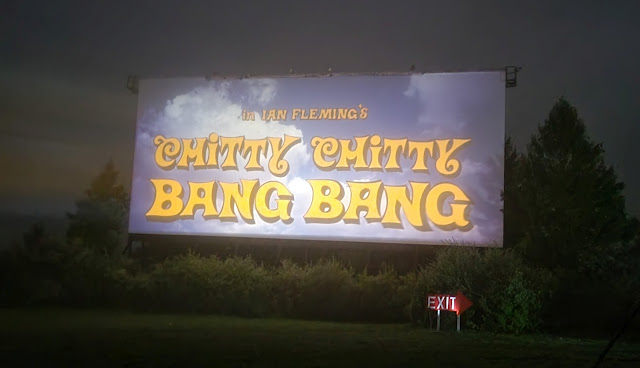 Chitty Chitty Bang Bang is a film with a lot of talent behind it.  It's based on a novel by James Bond creator Ian Fleming and was filmed from a screenplay co-written by Willy Wonka author Roald Dahl.  I had never seen Chitty Chitty Bang Bang before last night, and unlike Mary Poppins, I don't remember ever hearing any songs or seeing clips from the film.  The only thing I ever remember seeing from the movie is a Clockwork Lullaby Machine that was on display at the Ripley's Believe It Or Not Museum in Atlantic City.
The movie is a little on the long side, but it's a very nice musical about an inventor named Caractacus Potts (Dick Van Dyke) who tinkers with an old race car which he, his love interest and his children have named Chitty Chitty Bang Bang after the sound that the engine makes.  Potts modifies the car to the point where it can fly and operate as a motorboat.  This attracts the attention of the villainous Baron Bomburst of the nearby land of Vulgaria, and chaos ensues. 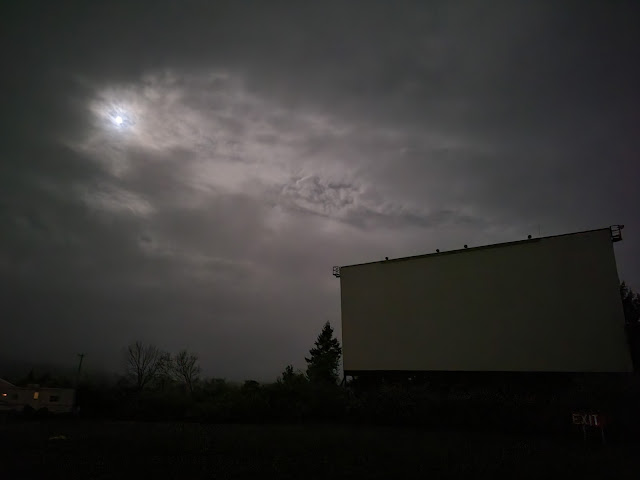 I wasn't prepared for the length of this double feature.  Most of the family films that I grew up with are pretty snappy, clocking in at around an hour and a half.  That is not the case with either of these two movies, with Mary Poppins clocking in at 139 minutes and Chitty Chitty Bang Bang at 145 minutes.  I generally don't mind a long runtime for most films where the plot keeps moving, but it can really feel like a drag when the story is constantly grinding to a halt for a song and dance routine.  Don't get me wrong, they're very charming, but at one point I looked down at the clock and was shocked to see that it was nearly two in the morning.  Then I looked up at the screen to see Dick Van Dyke dancing around and the story not seeming to be too close to wrapping up.  This left me with the feeling that they could have cut a good half hour out of each of these films without negatively impacting the movie one bit.
I'm glad that we got to see both of these movies at the drive-in, but I'm also pretty happy that they're the only family musicals on the lineup this summer.  It won't stop me from going to any of them that they announce in the future, but I sure hope that they're Sunday night single features.