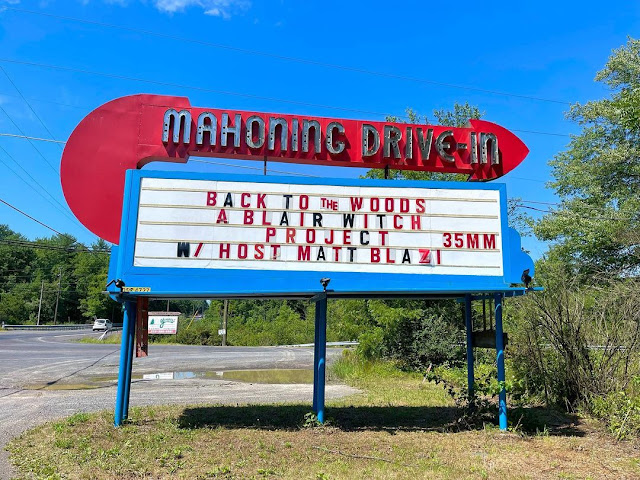 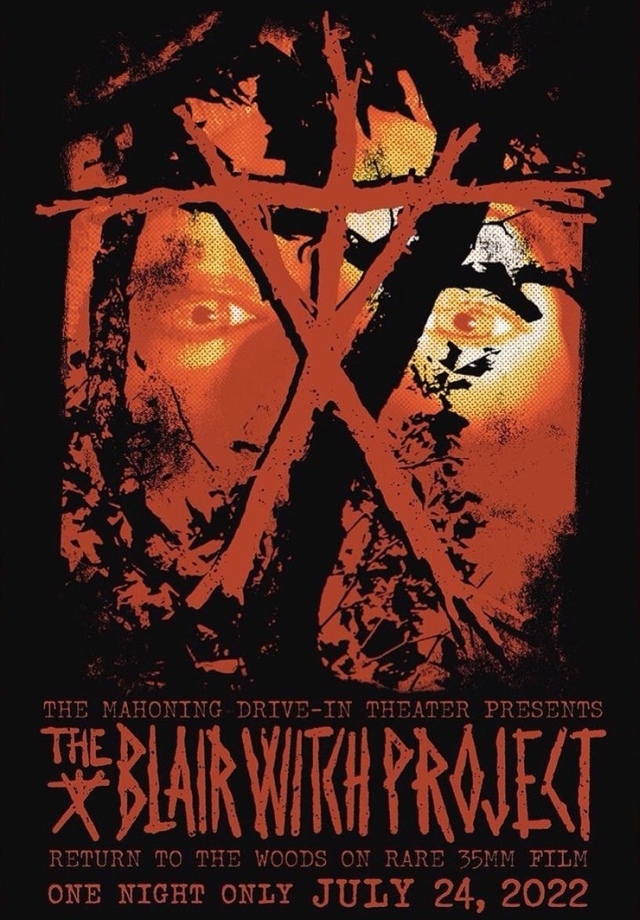 The poster for this show was designed by artist Tom Bifulco.  He's created quite a few incredible posters in the time that I've been coming to the Mahoning, and this one is one of his best.  It sold out about 30 minutes before the movie started.  Tom is a guest on the latest episode of the Mahoning Drive-In Radio Podcast, so give it a listen if you are so inclined. 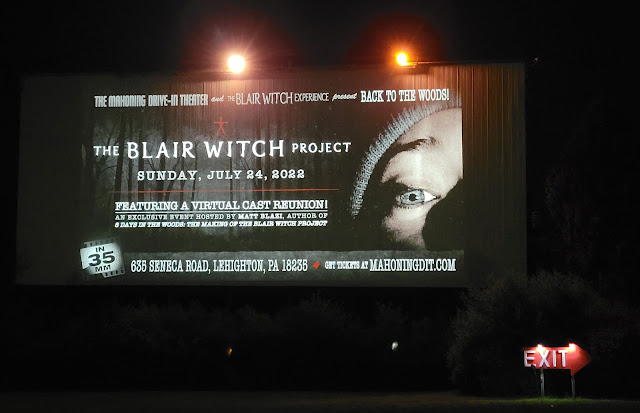 The Blair Witch Project was a cultural phenomenon when it was released in 1999.  It was the first independent film that I'm aware of to take full advantage of the internet as a promotional tool, and I think that it did so in a more effective way than any film has done in the years since its release.  It was preceded by a show on the Sci-Fi Channel called Curse Of The Blair Witch (available to stream for free on Tubi), which was presented as a documentary and led many to believe that the movie was a true story and that three college kids really did disappear in the woods of Burkittsville, never to be seen again.  Most of the people I knew at the time believed that the film was true, and that it really was pieced together from "found footage" that was filmed by Heather, Josh and Michael, and discovered by the search parties who looked for them.
The first time I saw The Blair Witch Project was at the Key Theater in West Hazleton in October 1999.  That theater has since been converted into a combination restaurant/theater called the Cinema & Drafthouse, but back in the 90's, it was a traditional single-screen cinema that sold tickets to every show for one dollar.  They typically showed films that were out of the major theater chains but not yet available on home video, but it was much easier to avoid spoilers in those days.  If you were patient, you could see six or seven blockbuster films on the big screen for the price that you'd pay for a single movie ticket at the Hoyt near the mall.  I lived close enough to the Key Theater that I could walk there in less than five minutes, so I saw quite a few movies here and each one only cost a buck.
I'm not a big fan of most of the found footage films that it inspired, but when The Blair Witch Project was first released, it was fresh and innovative and incredible in every way.  The movie blew me away the first time that I saw it in theaters.  I bought it on DVD as soon as it was available on home video and I watched it with and without the directors commentary.  The commentary track was very interesting, but I found that watching the movie at home didn't have the same effect on me that it had on the big screen.  The atmosphere that I'm in when I see a movie has a huge impact on my experience and enjoyment of the movie, which is one of the reasons why I keep going back to the Mahoning Drive-In Theater as often as I do. 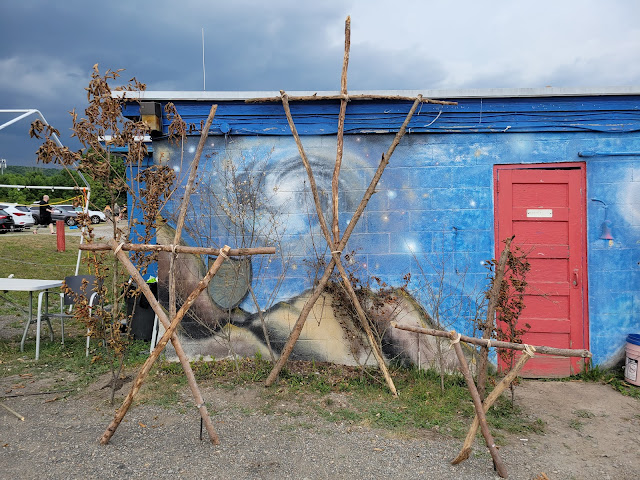 No place I have ever been has mastered the art of atmosphere better than the Mahoning Drive-In Theater.  I suspect that anyone who reads this blog probably thinks that I work here or that I'm being paid or given free tickets to praise them, but that is not at all the case.  I'm just a regular customer who's lucky enough to live nearby and to have a work schedule that seldom, if ever, stops me from attending a show.  If you love movies and you live in the area or are willing to take a road trip, you really should check out the list of upcoming shows and make it a point to come out.  Even if you just make it a one-time thing, I promise you that this is an experience you will be glad to have had. 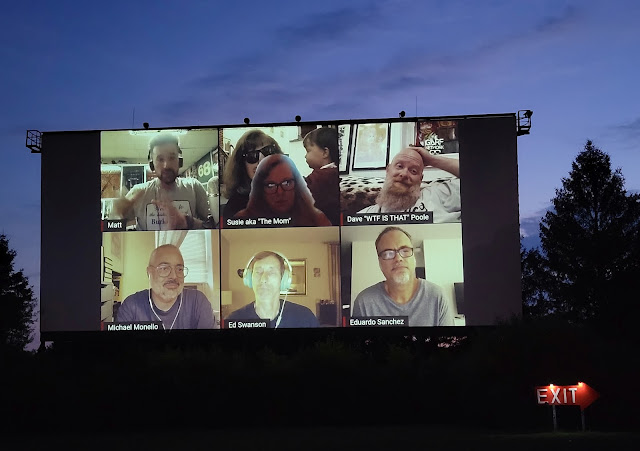 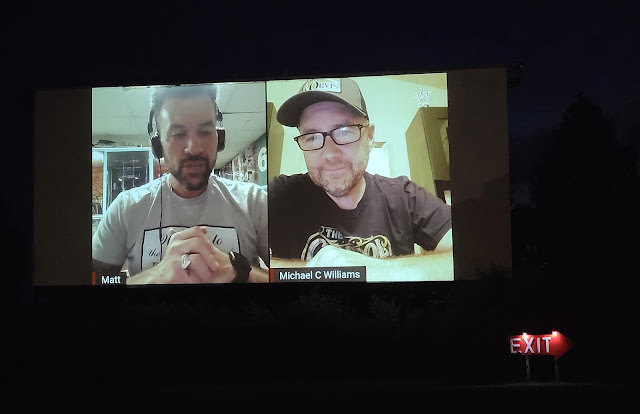 Author Matt Blazi was in attendance to sign copies of his 2019 book, 8 Days In The Woods: The Making Of The Blair Witch Project.  He also hosted two virtual Q&A sessions that played on the big screen before the film.  The first of these had five guests which included producer Michael Monello and director Eduardo Sánchez.  The second was a one-on-one conversation with Michael C. Williams, who was one of the three stars in the movie who fell victim to the Blair Witch. 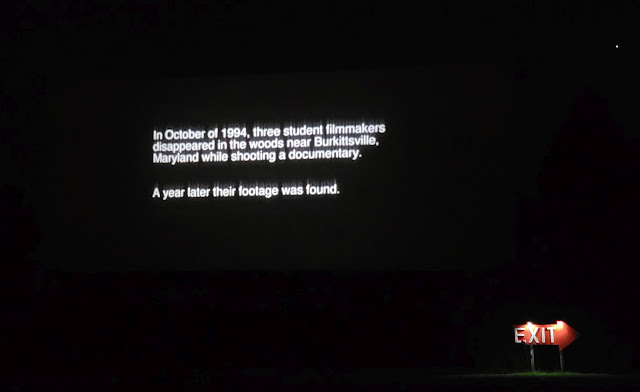 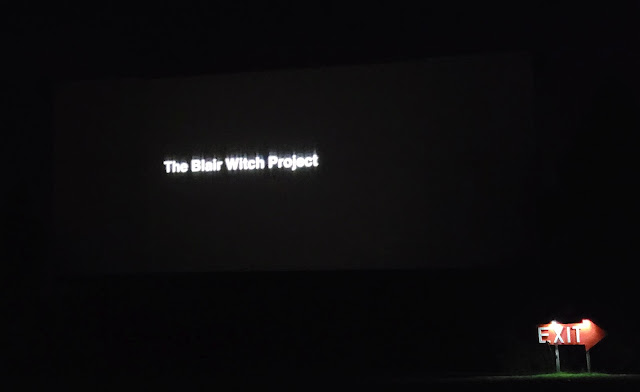 While my experience at the Key Theater for The Blair Witch Project blew me away, my experience last night at the Mahoning made my first viewing of this film pale in comparison.  First of all, there are some movies that home video simply cannot do justice to, but this experience was more than just seeing a movie on a big screen.
Try to imagine this scenario:  it's a pitch black on a warm summer night.  You're sitting in a field underneath a massive cinemascope screen.  It is a cloudless night with no light pollution, so when you look up at the sky, you're seeing nothing but a blanket of stars.  The Big Dipper is to the right of the screen, hovering over the road that exits the drive-in.  There is a line of trees beneath and around the screen and surrounding the lot, so you hear every gust of wind and every cat, rabbit, and whatever else lives in the woods rustling around through the leaves and branches, and you hear the hums and chips of every insect.  On the screen is a gritty horror flick shot on Hi8 video cameras, and you are joining three terrified college kids who are lost in the woods and pursued by a witch.
Dude... a night at the movies doesn't get better than this.