The Phillie Phanatic Saves The 4th 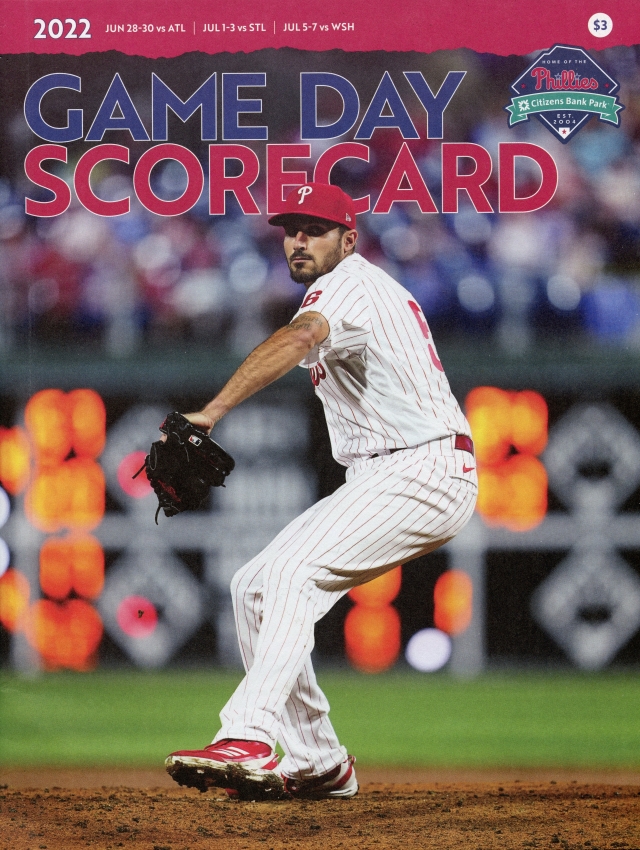 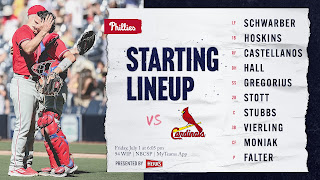 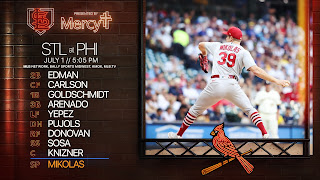 My birthday game this year was pretty spectacular!  It had a little bit of everything.  A franchise legend came back to pay tribute to a legend of the game in his final year.  We got our first look at a rookie who has started his big league career with a remarkable home run streak.  The Cardinals third baseman hit for the cycle, but the Phillies came from a 3 run deficit to win.  Last, but not least, we got to see the world premier of a short film followed by an incredible display of fireworks. 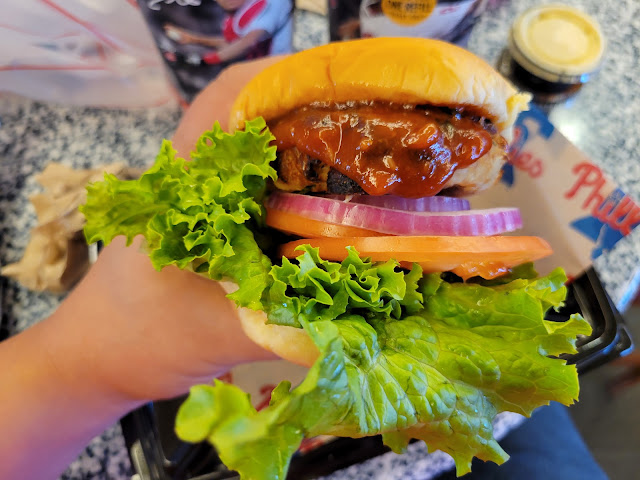 The traffic getting into the ballpark was pretty rough, so we didn't have time to stop at the Bull's BBQ.  I have to remember to take the Schuylkill Expressway to the ballpark no matter what Google Maps says.  It's super congested, but it's a straight shot to the parking lot once you take your exit.  We ended up grabbing dinner at Baker Bowl Bistro in the Hall Of Fame Club where I had the Seared Crab Cake Sandwich.  Not quite as good as the smoked kielbasa, but a thousand times better than the PB&J Bacon Burger that I tried last time. 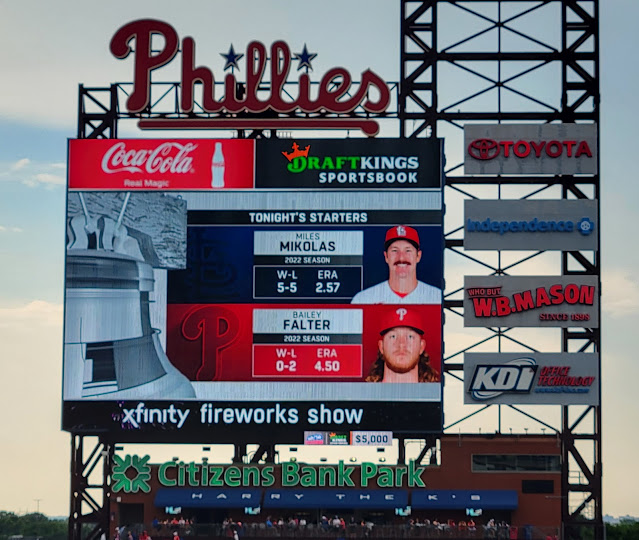 This game would have been started by Zach Eflin, but he was placed on the 15-day injured list (retroactive to June 26) with a bruised right knee.  The Phillies DFA'ed Óscar Mercado so that they could call up left hander Bailey Falter to take Eflin's spot in the rotation.  It was his fifth career start at the Major League level, and his first start at Citizens Bank Park.  As for Mercado, he only had a single plate appearance in a Phillies uniform after they took him off of waivers from the Guardians on June 27th before getting designated for assignment for the second time this season. 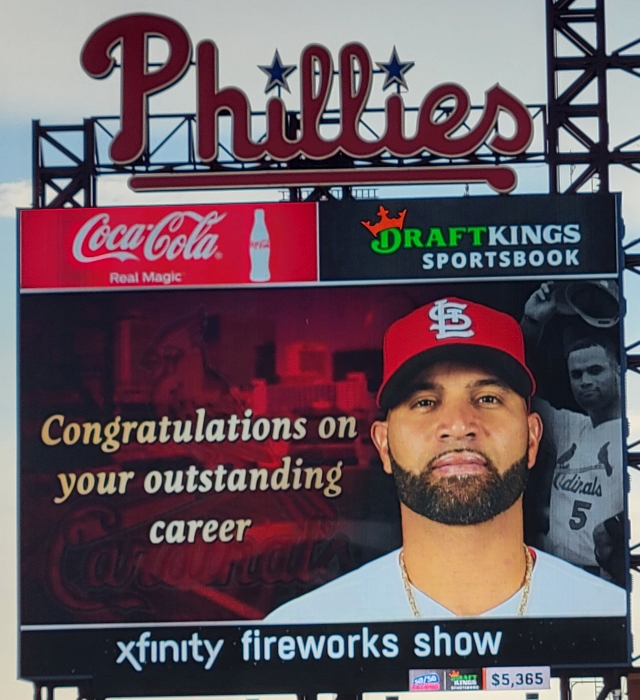 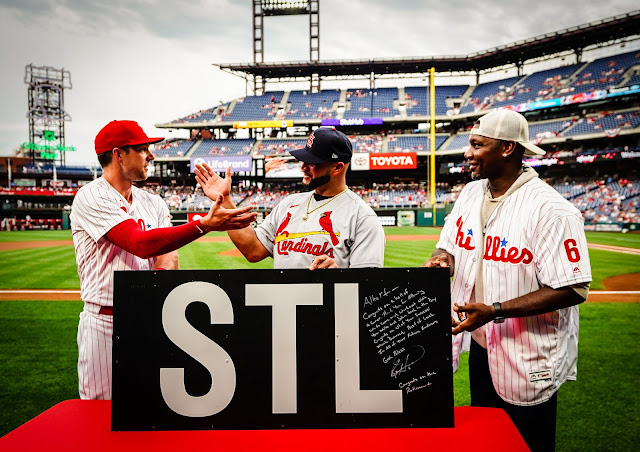 Before the game, the Phillies took a moment to honor one of the greatest players the game has ever seen: Albert Pujols.  The future Hall Of Famer made his MLB debut on April 2nd, 2001 and is only one of two active players who are older than I am (the other being Red Sox pitcher Rich Hill).  In his phenomenal 22 year career, Pujols has hit 683 home runs, which rank him fifth on the all-time list, behind only Barry Bonds, Hank Aaron, Babe Ruth and Alex Rodriguez (and he has a realistic shot of passing A-Rod).  He has 2,167 career RBI, which is second only to Hank Aaron for the most of all time, and his 3,324 career hits are the 9th most of all-time.  He's only the fourth player in baseball history to reach both the 3,000 hits and 600 home run milestones in his career, a ten time All-Star, three time MVP and two time World Series champion.  This man has literally done it all in this sport and among the truly all-time greats who have ever played the game.  He has already announced that he's retiring at the end of the season, and this is the last series that the Cardinals will play in Philadelphia in 2022, so we are witnessing the final swings of the bat that a true legend of this sport will take in our city.  It's truly a historic event, and I feel privileged to have witnessed it. 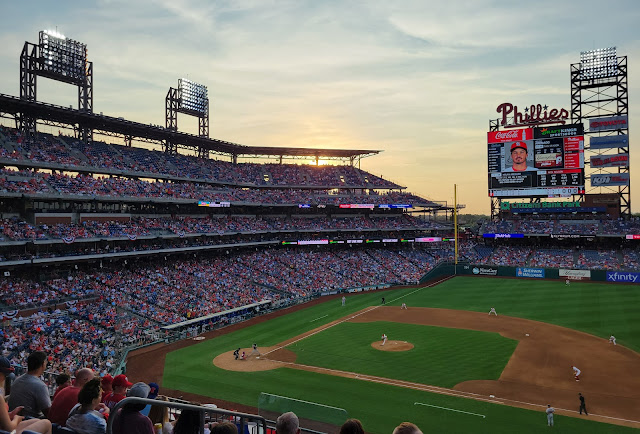 With two outs in the top of the first, Paul Goldschmidt singled and Nolan Arenado scored him with a triple to put the Cardinals up 1-0.  The duo did more damage in the top of the third when Goldschmidt doubled and Arenado hit his 15th home run of the year to give the Cardinals a 3-0 lead.  Fortunately for the Phillies, the three runs driven in by Arenado would be the only runs that they'd score all night.
Nolan Arenado had a hell of a good night overall.  He ended up hitting for the cycle with the triple in the first, the two run homer in the third, a double in the sixth and a single in the 8th.  He got a nice ovation from the fans in attendance for the accomplishment.  It was the second time in his career that Arenado hit for the cycle, and it was only the 17th time a Cardinals player has hit for the cycle in the 141 year history of the franchise.

Albert Pujols didn't have such a great night at the plate.  The future first-ballot Hall of Famer went 0-3 with two strikeouts before being lifted for rookie Nolan Gorman in the top of the 8th. 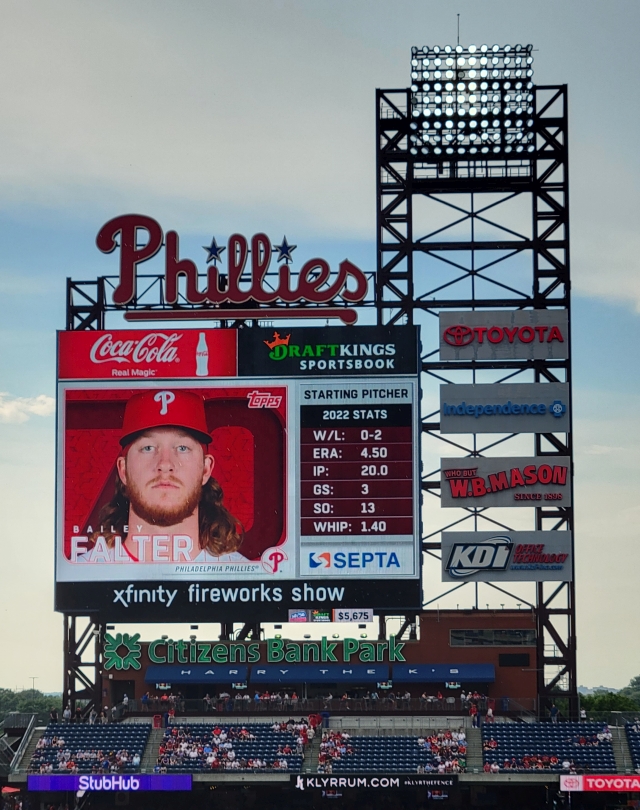 In his first career start at Citizens Bank Park, Bailey Falter pitched four innings and gave up three earned runs on five hits with a walk and five strikeouts.  The Phillies bullpen held the Cardinals scoreless for the rest of the game, starting with Nick Nelson in the 5th, Jose Alvarado who came in with one out in the 6th, Andrew Bellatti in the 7th, Seranthony Dominguez in the 8th, and Brad Hand in the 9th.  Alvarado got the win, with Hand notching his third save of the season.
I was hoping to have a chance to see Mark Appel pitch in the big leagues.  The former first pick overall in the 2013 draft had finally made his Major League debut on Wednesday, but since he came out of the bullpen two nights in a row, I figured it was a pretty slim chance that he'd get into this game.  We got to see Appel pitch for the Iron Pigs last season in his first game since his return to baseball (which was also our first game back since the Pandemic began).  I really hope the dude can solidify a spot in the Phillies bullpen. 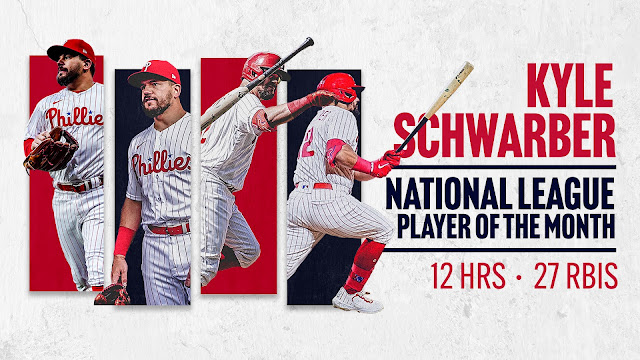 Kyle Schwarber had one hell of an impressive month.  His 12 home runs in June were equal to the total number of home runs hit by the entire Detroit Tigers roster last month, and he's been consistently getting on base.  He was named the National League Player Of The Month, and his offensive production continued into July.  He led off for the Phillies in the bottom of the first with a single and went 2-4 with an RBI in last night's game.
Schwarber's RBI came in the bottom of the fifth when the Phillies tied the game 3-3.  The bottom half of the inning began with catcher Garrett Stubbs reaching base on a throwing error by the normally slick fielding Nolan Arenado.  This was followed by a single from Matt Vierling and a Mickey Moniak RBI double which gave the Phillies runners on 2nd and 3rd with no outs.  Schwarber grounded out to score Vierling and advance Moniak to 3rd, and Rhys Hoskins hit a sac fly to score Moniak and tie the game. 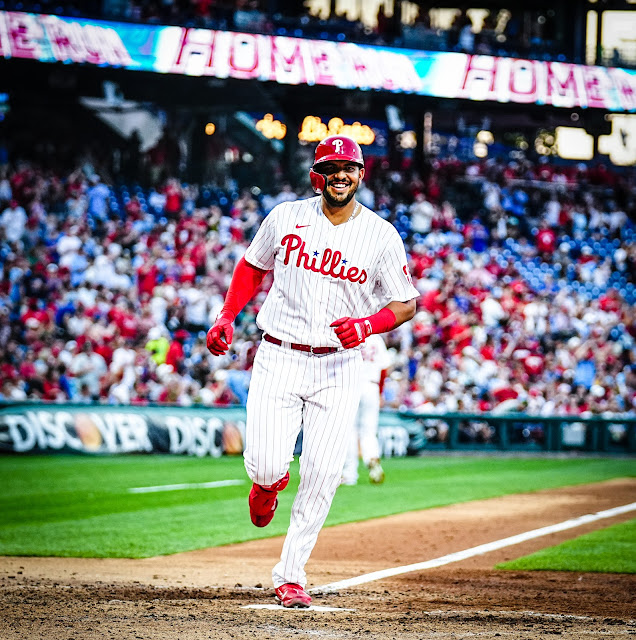 The hero of the night was designated hitter Darick Hall.  He was just promoted to the big leagues and made his Major League debut two nights earlier in the same game that Mark Appel made his MLB debut.  That night, Hall went 0-4, but he went 2-5 last night against the Braves with both being home runs.
Last night, Darick Hall led off the bottom of the 6th with a home run off of Cardinals starter Miles Mikolas that put the Phillies up 6-5.  Long Ball Hall became just the ninth player since the expansion era began in 1969 to collect three home runs for his first three hits in the big leagues.  Rhys Hoskins hit his 16th home run of the season in the bottom of the 7th to make it a 5-3 ballgame, which the Phillies held onto for the win.

Nolan Arenado's final hit to complete the cycle was a single that came in the top of the 8th off of Seranthony Domínguez.  It was hit right to Matt Vierling who was playing third base for only the second time at the big league level.  According to Baseball Reference, he's only ever appeared at third base in a total of 13 games since the Phillies drafted him in 2018.  I'm not sure what the Phillies plans are here, but his lack of experience at the hot corner definitely showed.  He looked uncomfortable out there, and made a couple of pretty bad throws to first base.  Vierling bobbled the ball that Arenado hit to him but recovered to make the throw.  Arenado would have easily beaten the throw even if it was right on target, but the ball sailed over Rhys Hoskins' head which allowed Arenado to advance to second.  It was scored a single, with an error that allowed Arenado to take second base.  Thankfully, the error didn't hurt the Phillies in the end.  Seranthony struck out Juan Yepez and got Nolan Gorman to ground out, which stranded Arenado at second base to end the inning. 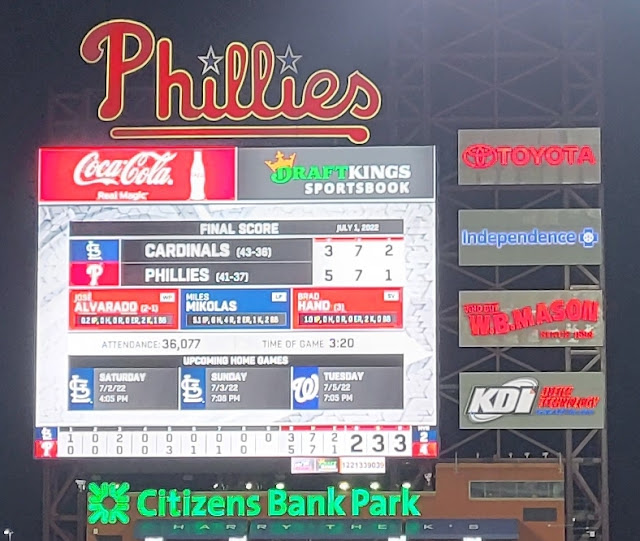 Brad Hand came in to pitch a clean 9th for the save.  He struck out Brendan Donovan and got Edmundo Sosa to fly out to center field.  Lars Nootbaar, which may be the greatest name in the history of baseball, came in to pinch hit with two outs in the bottom of the 9th.  Hand struck him out to end the game.  Phillies pitchers struck out 15 Cardinals batters, with each of the relief pitchers striking out two batters.  In five innings of work, the Phillies bullpen struck out 10 batters while allowing 0 runs and just 2 hits and 2 walks, which is a very encouraging sign from a part of this team that had been its biggest weakness in recent seasons. 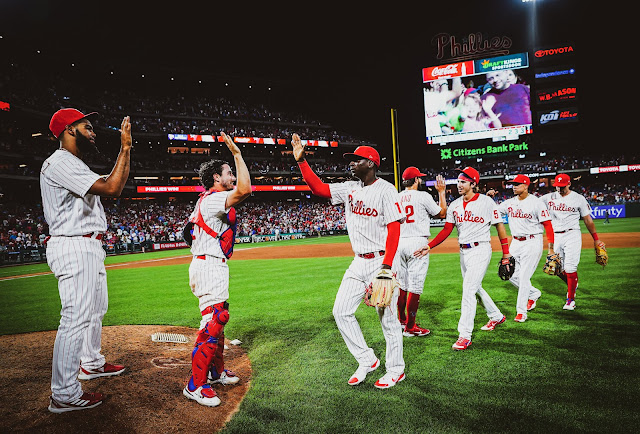 With last night's win, the Phillies improved their record to 41-37 and are just 1.5 games behind from a wild card spot.  Obviously, it's too early to start thinking about the playoffs since we haven't even hit the All-Star Break yet, but the Phillies have definitely been headed in the right direction since they fired Joe Girardi.
However, the night did not end after the final out...
We got to see the premier of a short film from the Phillies called The Phanatic Saves The Fourth.  It stars the Phillie Phanatic and features cameos from Jimmy Rollins, Mike Schmidt, Ryan Howard and Bryce Harper as The Council Of The MVPs.  It was a lot of fun, and it perfectly set up what was one of the best fireworks shows I have ever seen. 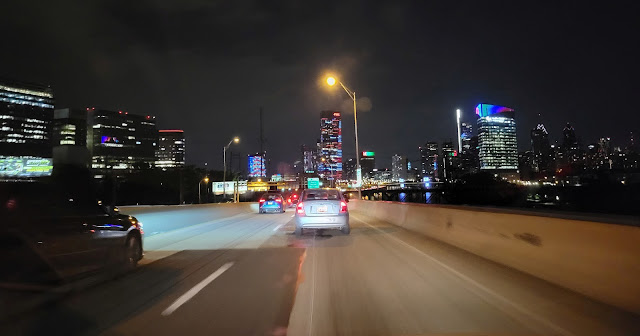 With the way food and gas prices have gone up, this is probably going to be my last Phillies game of the season, but I couldn't have asked for two better games.  I got to spend one day at the ballpark with my dad, and my birthday at the ballpark with my wife.  The weather was beautiful, and the Phillies came back from behind to win both days.  Sometimes it all works out.