Back To The Ballpark 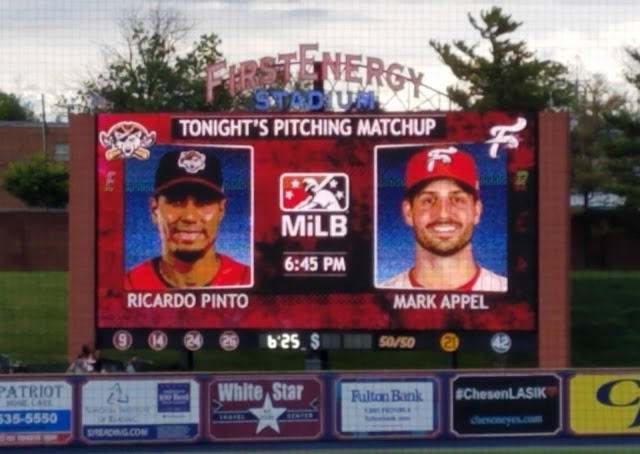 Saturday, May 8, 2021
Erie Seawolves @ Reading Fightin Phils
FirstEnergy Stadium - Reading, PA
Pitching: Ricardo Pinto vs. Mark Appel
Results: Fightin Phils defeated Seawolves, 6-4
It has been over 600 days since I was last at a ballpark to watch a baseball game.  Man, so much has happened in the world since then.  After the last fifteen months living under the cloud of Covid-19, it almost feels like we're living on a different planet from the one that we all shared in 2019.
My wife surprised me with tickets to last night's game, and I couldn't have been happier.  Being at the ballpark is one of the few places in this world where I truly feel like I belong.  I was even more excited when we settled into our seats and they announced the opening lineups.  The starting pitcher for the Erie Seawolves was former Phillies reliever Ricardo Pinto.  That was pretty cool, but what was even better was that Mark Appel was starting for the Fightin' Phils.
Appel was the #1 pick overall (taken by the Houston Astros) in the 2013 draft.  Scouts thought that he had the potential to become an ace in the Major Leagues, but injuries and ineffectiveness took their toll, and his minor league career hasn't worked out that everyone expected.  The Phillies acquired him in the winter before the 2016 season in the Ken Giles trade - the same deal that brought Vince Velasquez to Philadelphia.  The Phillies hoped that they could turn Appel around, but it didn't happen.  Two years later, in February 2018, Appel announced that he was stepping away from baseball altogether at the age of 26.  He never made it to the majors.
At this point, the baseball world figured that the Mark Appel story had ended, but he made a surprise announcement in March 2021 that he would be returning to the game at age 29.  I've read a few interviews that he's given about his comeback, and it really seems like the guy wants to play for the pure love of the game.  He's made his peace with the fact that he's not the young phenom that scouts projected him to be, and whether he makes the Major Leagues or not, he wants the rest of his playing career to be fun.  Last night's game is the first live game that he has pitched in since 2017, and I'm glad that I was there to see it.  I'm really rooting for this guy to succeed.  He seems like a really good dude with a positive attitude, and I would be thrilled to see him bounce back and have the kind of career that he wants to have. 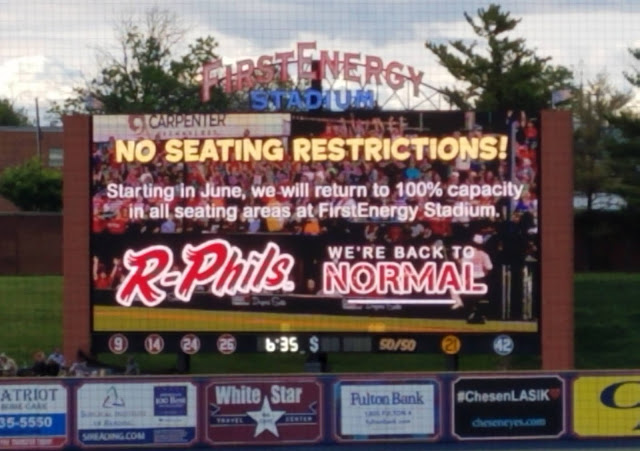 Minor League Baseball wasn't played at all in 2020, so the start of the Reading Fightin' Phils season this past Tuesday was a pretty big deal.  Throughout the month of May, they're selling a limited number of tickets per game and socially distancing fans throughout the ballpark.  However, the team announced before the start of the last night's game that they will be returning to 100% capacity in June.  By then, I'll have my second Covid vaccination shot, so it really is starting to feel like life is getting back to normal. 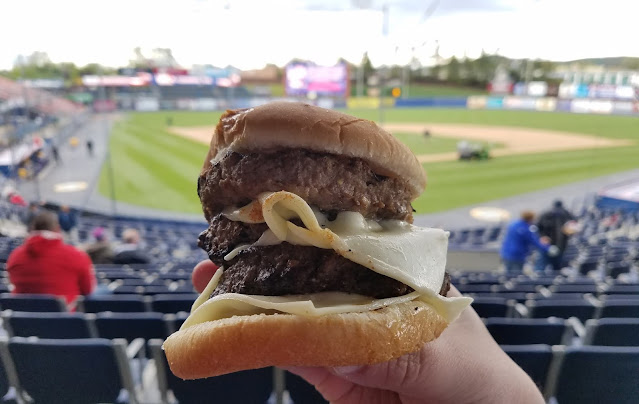 Not all of the food vendors were open for Saturday night's game, but the main ones were up and running.  I had this triple cheeseburger, which was pretty awesome.  I was expecting three thin burger patties like you'd get at McDonalds, but these were all pretty damn thick and very tasty.  They didn't skimp out on the cheese either. 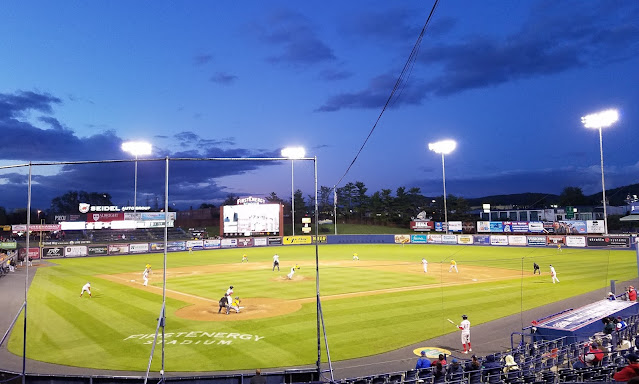 It was a cold night, but a hell of a good game, and a very closely fought battle despite the fact that the five pitchers Reading sent to the mound combined to record a total of 18 strikeouts.
Mark Appel struggled a bit with his control, which is understandable when you consider that he hasn't pitched in a game since September 2017.  He threw 56 pitches over 2 ⅔ innings and allowed one run on three hits, two walks and two hit batters.  However, he struck out four, had a good changeup, and he was hitting 95 - 97 with his fastball.  It may not look pretty on paper, but it was an encouraging first outing.
Lefty Taylor Lehman came on to relieve Appel with two outs and two on in the third inning.  It was his first appearance in Double A and he was very impressive.  He recorded a strikeout to end the third inning and pitched three innings, striking out seven.  He gave up one run on five hits and a walk before he was relieved by Zach Warren, who came into the game with the bases loaded in the sixth.  Warren ended the inning by striking out Seawolves DH Drew Ward, who's has the unusual distinction of having a first name which is the past-tense of the backward spelling of his last name.
Warren started the 7th inning, but he got into trouble.  He gave up a single to Josh Lester, threw a wild pitch and walked Yariel Gonzalez and Juan Centeno to load the bases with no outs.  Tyler Carr came into the game to relieve Warren and struck out the first two batters he faced before getting Riley Greene to pop out and end the inning with no damage.  He returned to pitch in the 8th and gave up a walk to Jacob Robson and a two run homer to Drew Ward, but he recorded three strikeouts to end the inning.  Joel Cesar came in to pitch the 9th and had a 1-2-3 inning with one strikeout.  Josh Stephen made an excellent diving catch in right field for the final out of the game.
There were two incredible plays at the plate that kept the Seawolves from scoring.  On both occasions, the victim was third baseman Yariel Gonzalez.  Center fielder Matt Vierling gunned down him down at the plate to end the second inning when he attempted to score on an RBI single off the bat of John Valente.  A very similar play took place in the top of the 5th when Juan Centeno hit an RBI double to left field.  Madison Stokes threw to shortstop Arquimedes Gamboa who then fired it to catcher Rodolfo Duran to once again record an out on Yariel Gonzalez at the plate. 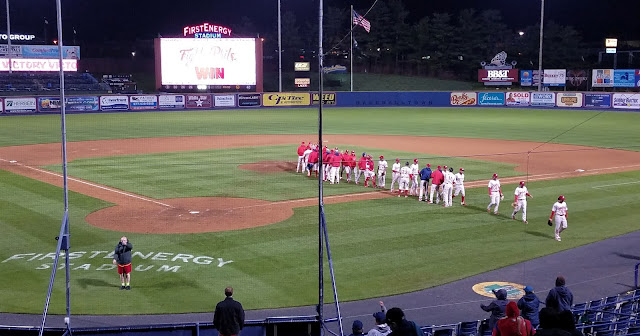 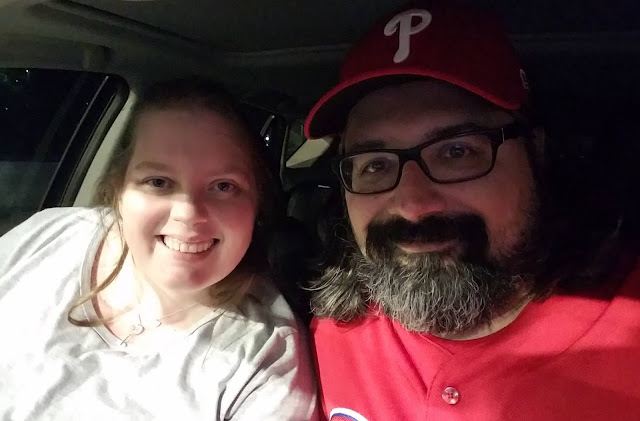 After the game, we stopped at Wawa for a late night cheesesteak, and then promptly got stuck behind a very large farm tractor that was driving at around 20 miles per hour on the highway for about twenty miles.  That's life in Pennsylvania. 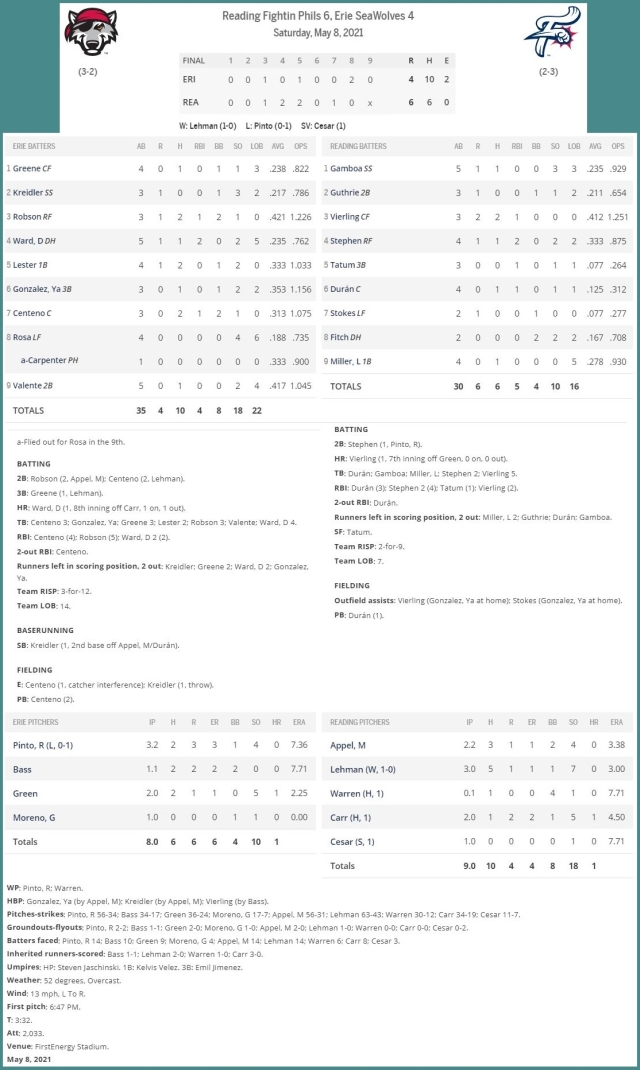