It Is Very Cold In Space 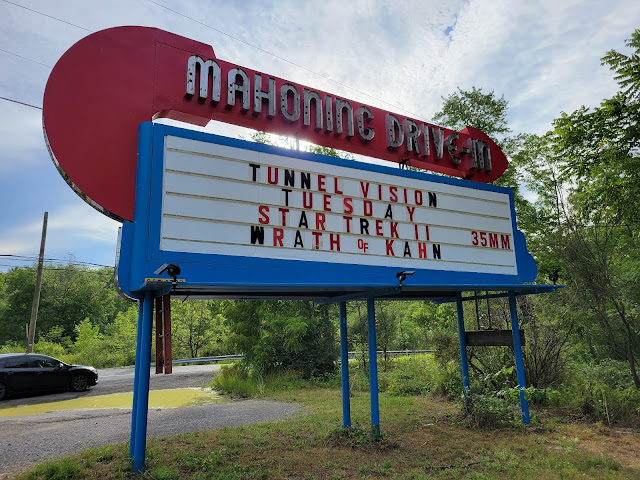 When I first started coming to the Mahoning, the fact that they show films on 35mm didn't matter to me all that much.  The most important thing to me was that I was getting to see movies that I loved, as well as classics that I had never seen before, on a giant cinemascope screen at a beautiful drive-in theater.  It's an immersive movie experience that even the best indoor theater or home video setup cannot match.  The fact that these movies were being projected from original 35mm prints was neat, but it wasn't the feature that brought me to this place.  On the rare occasion that a film had to be shown digitally at the Mahoning, I just kind of shrugged and thought "hey man, whatever it's gotta be is fine with me".
Over time, I've coming to appreciate the 35mm aspect of the Mahoning quite a bit more.  It has a more authentic feel - like the difference between listening to a band perform live music compared to a recording that's been processed with auto-tune.  Even the scratches and discolorations on the film give it character and enhance the experience. You also get to see the same film that audiences saw upon its initial release, and it's not always exactly the same film as the one you can stream at home.  Sometimes those differences are subtle.  For example, look at the title screen of the print that we watched last night.  Do you see anything missing? 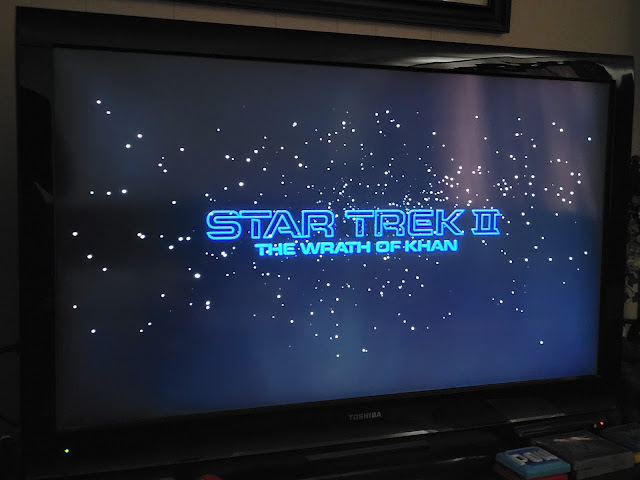 I had to play my Wrath Of Khan DVD earlier today to confirm that I wasn't having a Mandela Effect moment.  Sure enough, the title card on the disc identified the movie as Star Trek II, whereas the original print did not identify it as a sequel.  Now, is this a horrendous change on the level of the Star Wars Special Editions?  No, of course not.  However, it does make me wonder how many little things get tweaked and changed between the theatrical release of a film and the version that we get on home video.  It also makes me appreciate the opportunity to see an original 35mm print even more.  These reels are an endangered species, and I'm thankful that there are so many folks in the area who are dedicated to not only preserving these treasures from the past, but sharing them with an audience.