Back To School At The Drive-In 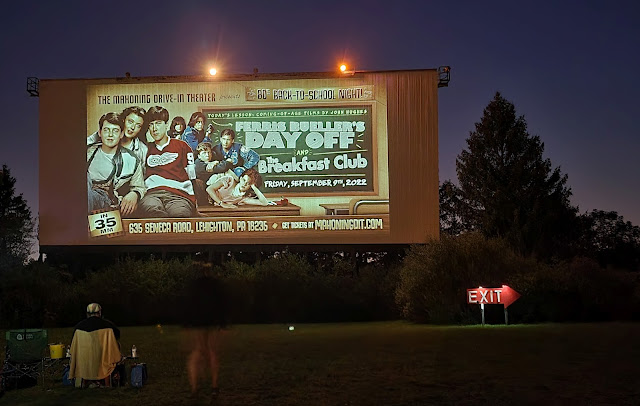 80's Back To School Night: Ferris Bueller's Day Off / The Breakfast Club
Mahoning Drive-In Theater - Lehighton, PA
We celebrated the start of the school year at the Mahoning Drive-In Theater with four high school films from the 80's and 90's, starting off on Friday night with two of my favorite movies ever made - a John Hughes double feature of Ferris Bueller's Day Off and The Breakfast Club. 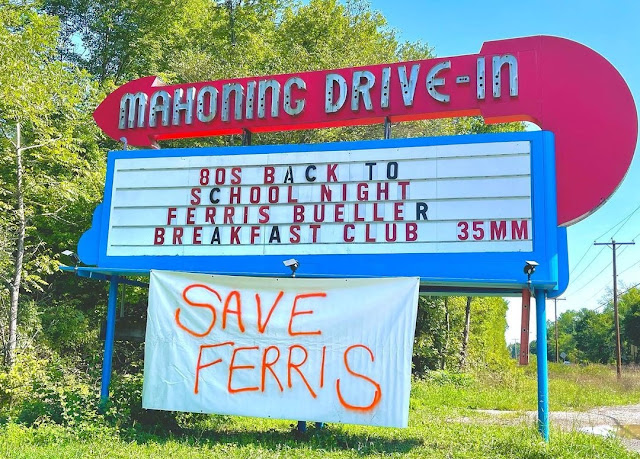 You know that you're in for a fun night when you see decorations hanging up a quarter mile down the street from the lot. 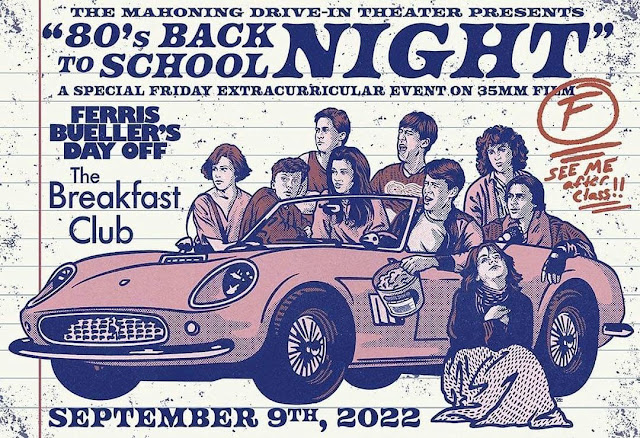 The poster for this double feature was designed by Tom Bifulco, and I think it's incredible.  The notebook paper and the grade perfectly reflects the Back To School theme.  It features The Breakfast Club sitting in and around Mr. Frye's '61 Ferrari with Ferris, Sloan and Cameron, and they're watching a movie at the Mahoning with Ferris holding a bucket of popcorn.  Perfect! 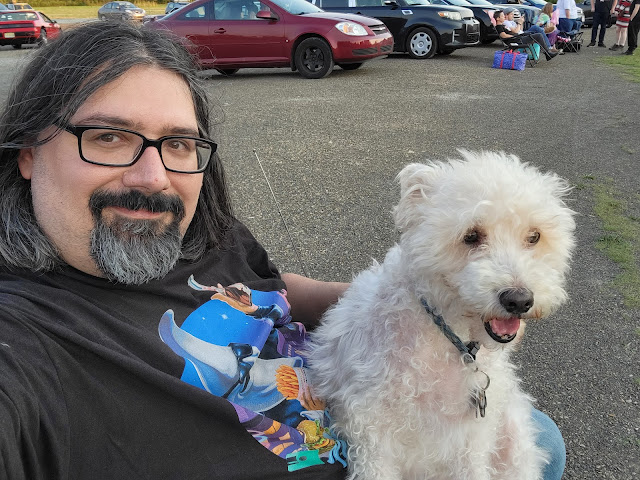 Little Harvey came with us to the drive-in, and as always, he had a ball.  He got to meet a lot of other puppies, and he soaked up the love and attention from everyone who walked by who wanted to pet him. 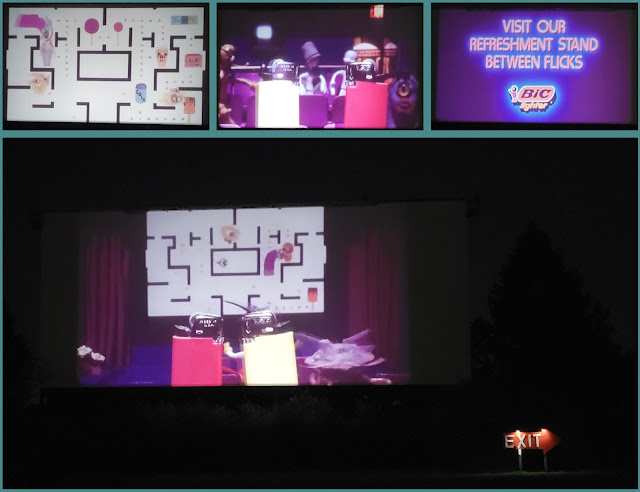 As always, there was a vintage trailer reel before each of the films, including the Back To The Future teaser trailer that we saw for the first time at a recent Patreon screening.  The last thing that was shown before the start of Ferris Bueller's Day Off was a Pac-Man inspired Bic Lighter promo ad for the concession stand.  If I had to guess, I would say that this was originally shown in theaters in 1980 or 1981 shortly after the arcade game was introduced and Pac-Man Fever spread across the country.  I'm especially fond of this bump, both because I love the arcade culture that I grew up with in the 80's and because I came to associate this ad with the Mahoning after seeing it on most of the nights that we went to the drive-in last year.  However, it seems like they're not playing this one as often in 2022.  I'm thinking that the film reels for these can get brittle and worn out, so they want to preserve it as best they can.  If I think of it, I'm going to try to take a video of it next time they show it.  I was able to find other Bic Lighter theatrical bumps on YouTube, but I haven't found a digital version of this particular ad, so I'd like to preserve the experience in some small way. 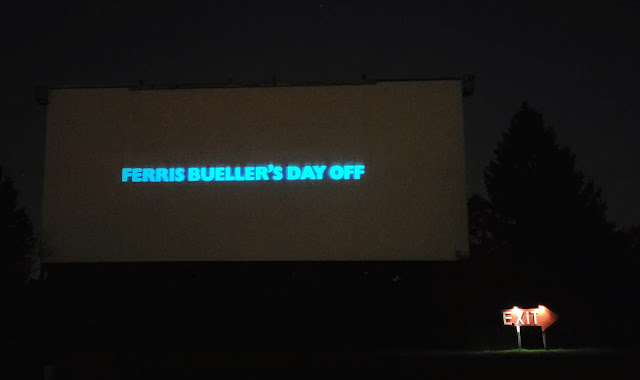 There are a small handful of films that I've seen which I would describe as a perfect movie.  It's a term that has a specific meaning to me which goes beyond it being a movie that I love and respect.  To me, a perfect movie is a pop culture snapshot of a moment in time.  It stands perfect on its own and should not have a sequel, a prequel, a reboot, or a spin off.  Every performance in a perfect movie is brilliant, every note in the soundtrack and score is equally brilliant, and its deleted scenes should remain on the cutting room floor.  It's a piece of art, and any change to that art would be a defacement.  Ferris Bueller's Day Off is, to me, a perfect movie.
Ferris Bueller premiered in theaters on June 11'th, 1986.  I hadn't turned six years old yet, so I was too young to see it in theaters, but this was one of my dad's VHS tapes that I borrowed and watched endlessly when we lived in Florida.  I saw it for the first time just after the end of my sixth grade school year and just a few days before I turned 12, and I remember thinking that I would give anything to be Ferris, but in reality, I am Cameron through and through.  Seeing it at the drive-in thirty years later from the eyes of a middle-aged man has not changed this perspective.  I still wish I was Ferris, but I know that I'm Cameron. 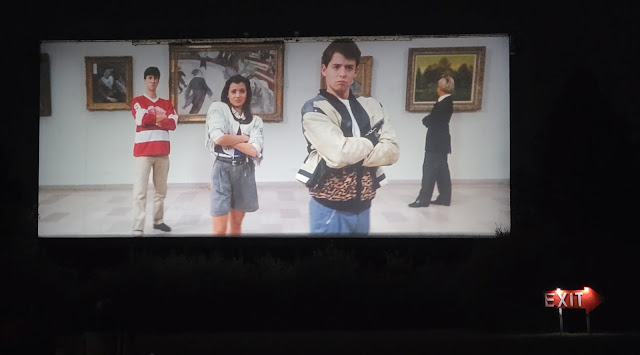 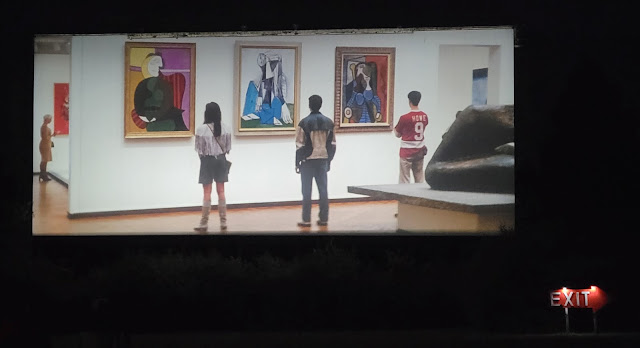 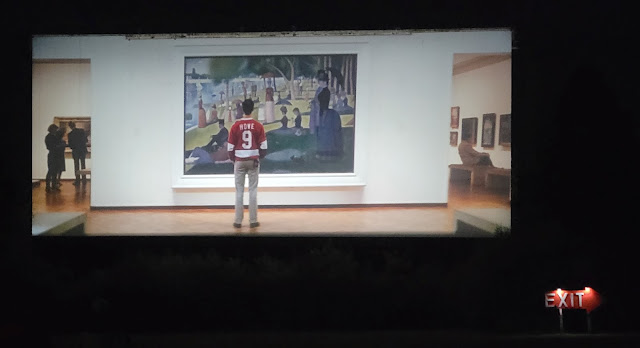 One of my favorite scenes in this movie is when Ferris, Sloan and Cameron visit The Art Institute of Chicago with the instrumental version of The Dream Academy's cover of Please Please Please Let Me Get What I Want playing.  The scene ends with Cameron staring into a painting by Georges Seurat that's called A Sunday Afternoon On The Island Of La Grande Jatte.  This moment perfectly captures what it feels like to be unsure of who you are and how others see you, especially when you're facing down the end of your teenage years and the start of your adult life.  John Hughes described this moment as Cameron noticing that the more he looks at the child in the painting, the more he can see that the child isn't really there and that it's just dots of paint, and he internalizes this feeling with his fear that the longer someone else spends looking at him, the less that they see. 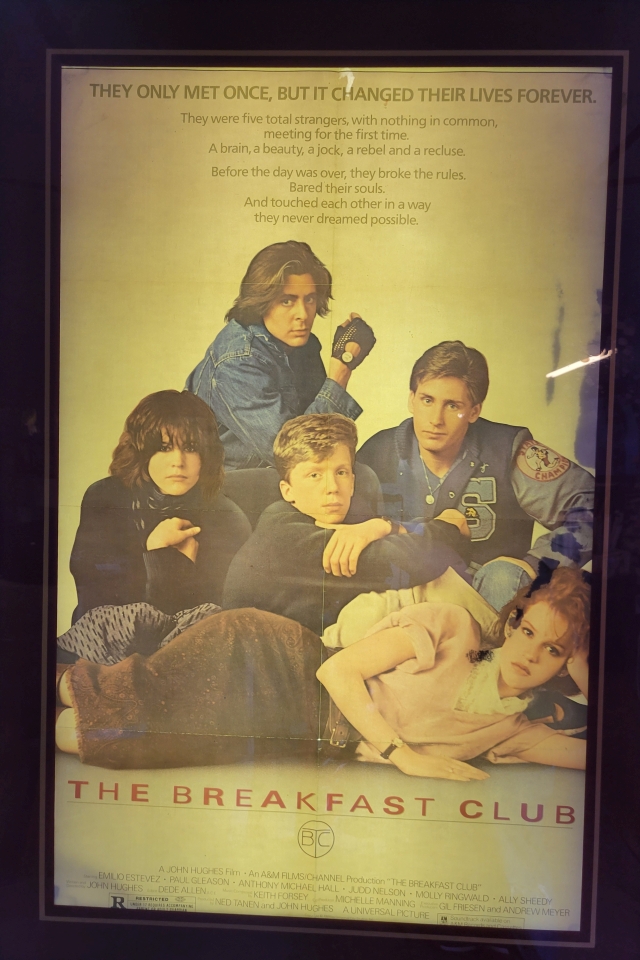 The Breakfast Club is arguably the most iconic movie from the 1980's.  Like Ferris Bueller's Day Off, I didn't see this movie until a few years into the 90's.  This is a movie that I have loved since the first time that I saw it.  I've always looked at this movie as looking at the struggles of the lives of teenagers through rose colored glasses.  The best example of what I'm talking about is the scene where Bender shows his cigar burn scars to Andrew.  The jock turns away in sadness and shows empathy for the fact that Bender has been abused throughout his life.  My experience in high school in the mid 90's is that empathy was in pretty short supply.  That is, of course, the point of the movie - that if you could ever get people from different backgrounds together to open up to each other, we'd all realize that the things we share in common far outweigh our differences. 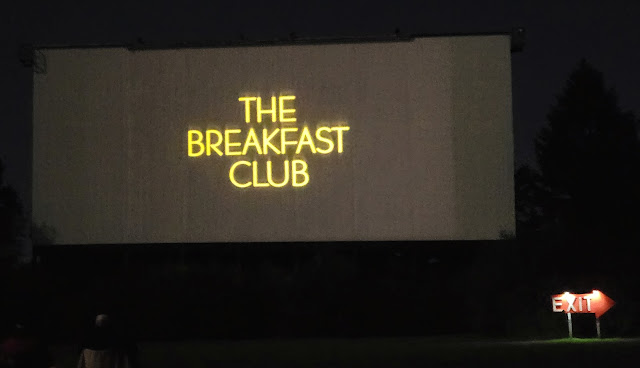 The opportunity to see both of these classics from my childhood on the big screen at the Mahoning was yet another dream come true, and it was only the first of three days of movies at the drive-in this weekend.