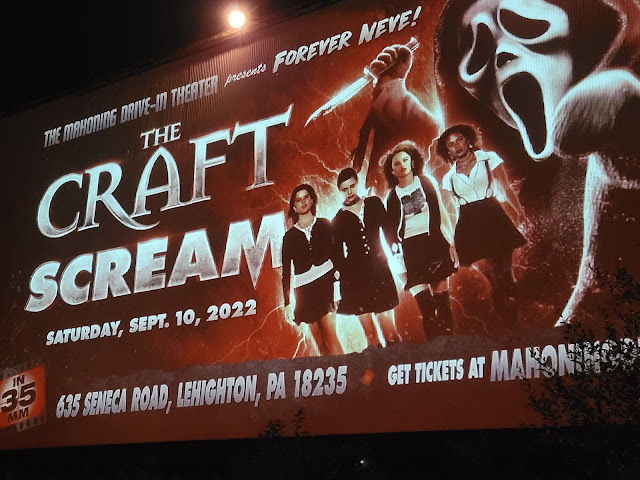 Forever Neve: The Craft / Scream
Mahoning Drive-In Theater - Lehighton, PA
The back-to-school theme at the drive-in continued on Saturday with a horror high school twin bill of The Craft and Scream.  You'd have a hard time coming up with a horror double feature that better reflects my high school years.  Both of these movies were in their initial theatrical run when I was 16 years old, and I've spent many hours of my late teenage years watching them on home video in the years that followed.  Despite this, I've only watched Scream a handful of times over the past twenty years, and I'm pretty sure I haven't watched The Craft since Bill Clinton was president, so Saturday night was a special opportunity to go back to a period of my life that I don't think about too much and let the nostalgia of the happy parts of those years wash over me. 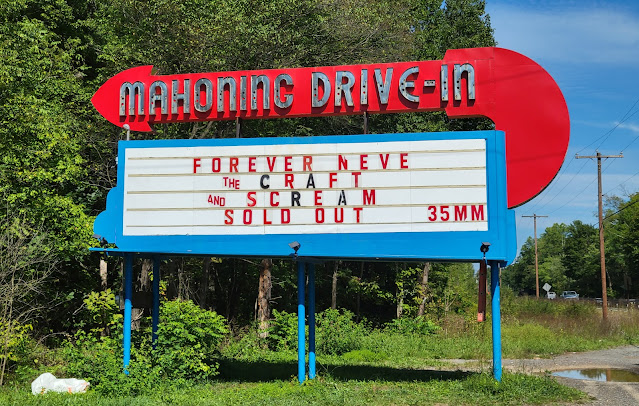 Virgil mentioned that the original idea for tonight was going to be a marathon of Scream movies, but the idea morphed into a double feature of horror flicks that feature Neve Campbell (and Skeet Ulrich).  I'm sure a Scream marathon would be a massive success and I hope that they do it at some point in the future, but it would be pretty hard for it top this event.  Tickets for Forever Neve sold old before Tuesday and the lot was packed full of folks, many of whom were experiencing the Mahoning for the first time.  The line for the merch table stretched well out into the parking lot throughout the pre-show and intermission.  I'm pretty sure the line was even longer than the line to meet Lloyd Kaufman during Troma-Thon in July.  You know that you have a massive hit on your hands when the line to buy a t-shirt is longer than the line to meet a special guest and an iconic director who was meeting fans and signing autographs for free. 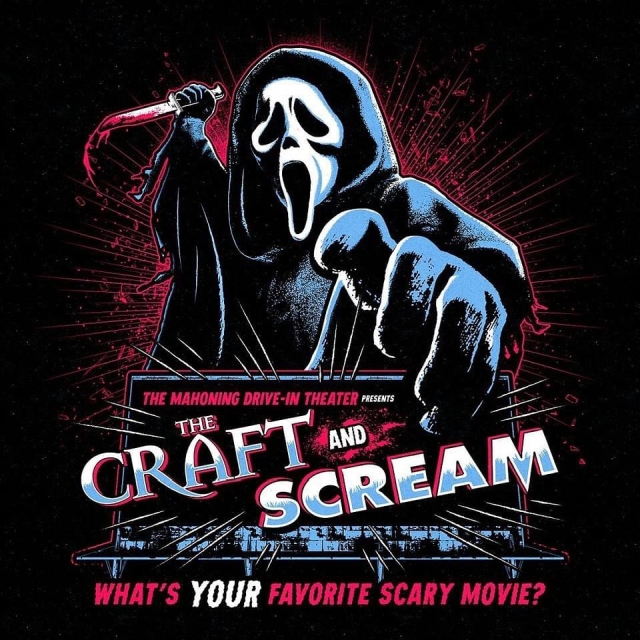 Speaking of t-shirts, the special limited edition shirt for this event was incredible!  It was designed by Andrew Kern, who is the same dude that designs the banner art that announces each of the events on social media and the Mahoning website.  You can see that banner art in the photo of the screen at the top of this post (click here to see it a bit more clearly).  He also designed a poster based on the banner art, and I'm pretty sure that both the shirt and the poster sold out before the second feature began. 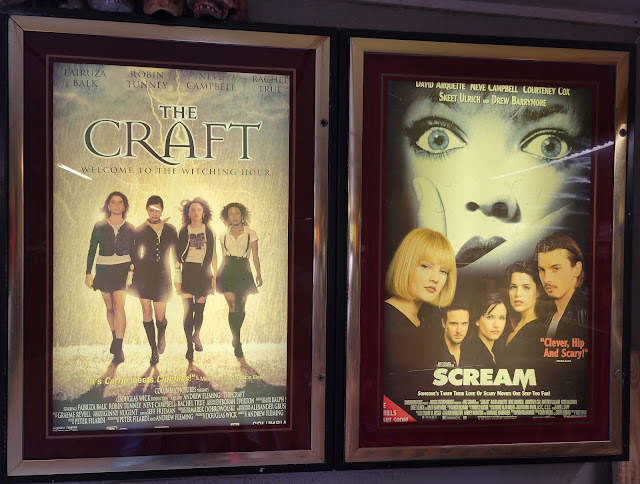 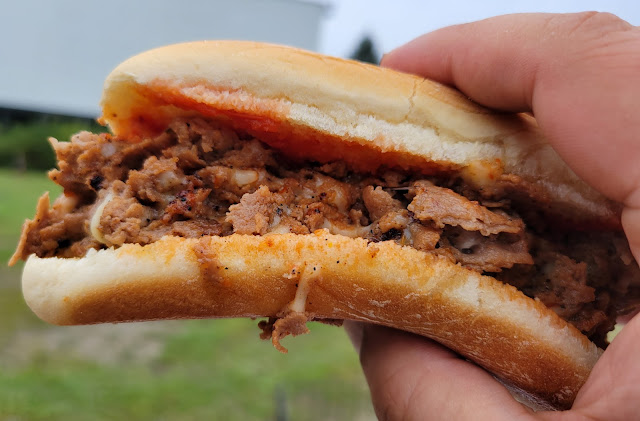 The special concession food for the night was called the Woodsboro Slasher, which was a chopped steak sandwich topped with mozzarella cheese and sauce.  It definitely hit the spot! 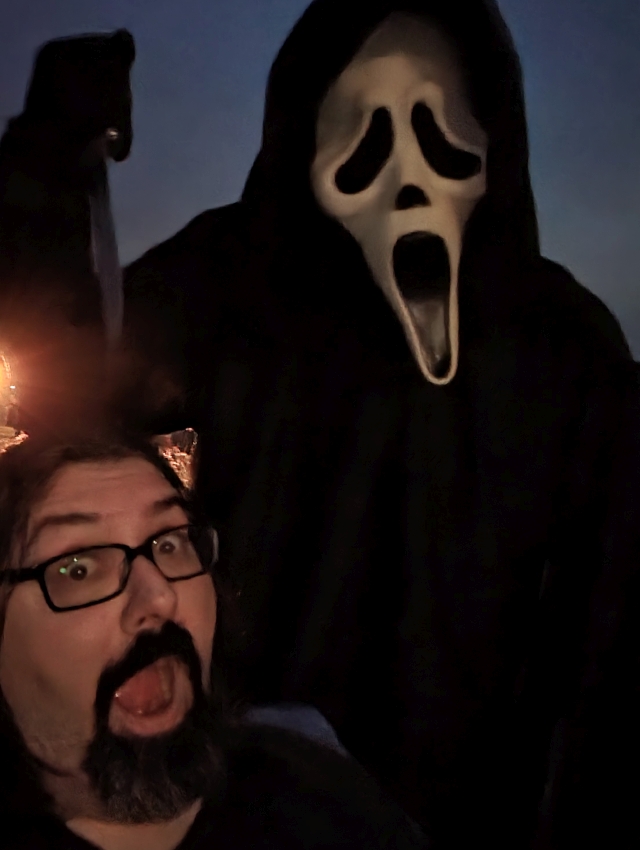 There were a lot of people who came to this event cosplaying as Ghostface.  Among them was JT, who was roaming the lot to scare the hell out of moviegoers and to take selfies.  I haven't talked to him as often as some of the other folks on staff at the Mahoning, but he's a genuinely good dude who takes pride in making a night at the drive-in special for everyone in attendance.

There was a 90's and early 2000's trailer reel shown before each of the movies, including these three trailers for Kill Bill, Species and Clueless.  These trailers are one of the things that first drew me to the Mahoning.  They do a fantastic job of setting the mood and helping to take you out of 2022 and put you in a headspace of the time and place when the feature film was released. 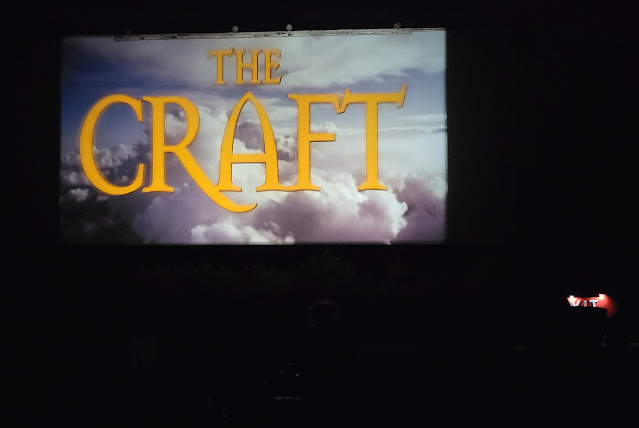 The Craft was the first movie of the Forever Neve double feature.  It's a movie that I first saw in the summer of 1996, and the thing that has stuck with me about this movie for all these years is the performance of Fairuza Balk as Nancy.  She is absolutely phenomenal throughout the film, but she takes it to another level in the final act - especially the last scene of the film.  I remember having a great deal of sympathy for her character in the final scene.  Despite all of the horrible things she did to her, Sarah was willing to forgive her, with the condition that she could be bound from doing harm against others and against herself.  It seemed as if she had a moment of clarity where life could have worked out for her character, but the anger and bitterness from a life of abuse was too much to overcome, and she snapped for what would be the last time. 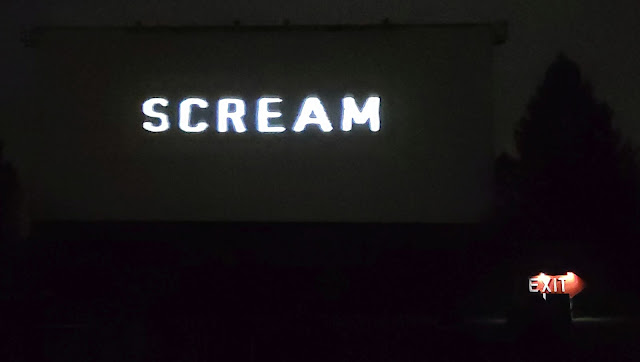 The second half of the double feature was a movie that has gone on to become one of the most iconic horror flicks of the 20th century, Scream.  It's a movie that I enjoyed as a teenager and have grown to appreciate even more in the years since it was released.  It was a massive success at the box office, which led to a teen horror renaissance that continued through the late 90's and into the early 2000's, in addition to a universe of sequels that are still being produced as recently as this year.  The opportunity to see this under the stars on a beautiful late summer night at a packed drive-in is one that I don't take for granted even for a second.  What an amazing experience! 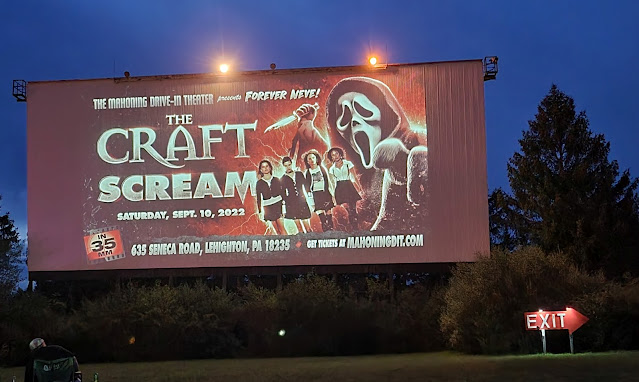 The rain held out just long enough for the credits to finish rolling on the second feature.  It started drizzling very lightly as I packed up the chairs and Harvey's enclosure.  It was a perfect night at the drive-in.