Bring Us The Blood Of The Outlanders 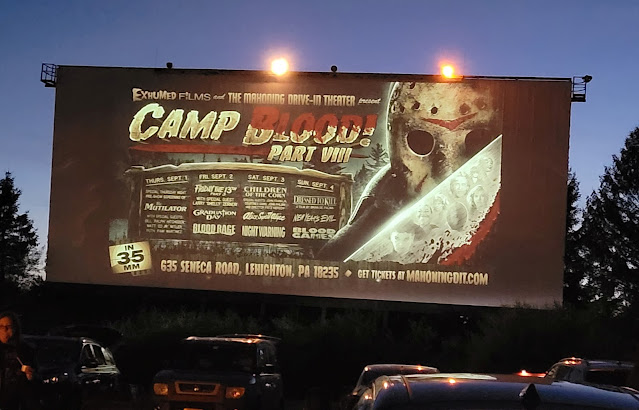 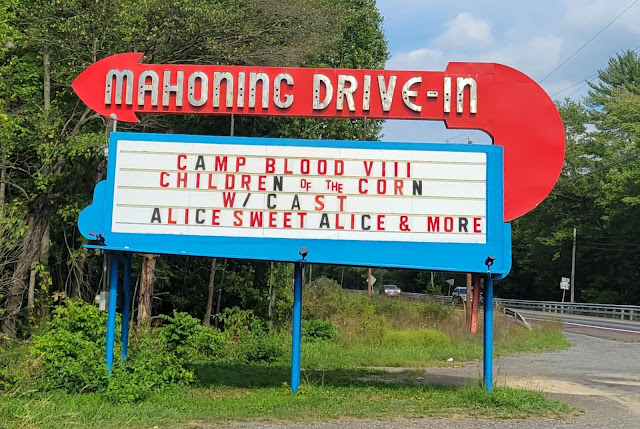 Camp Blood VIII Night Three
Children Of The Corn / Alice Sweet Alice / Night Warning
Mahoning Drive-In Theater - Lehighton, PA
We're back for the third night of Camp Blood at the Mahoning, and this time, we have brought The Beast! 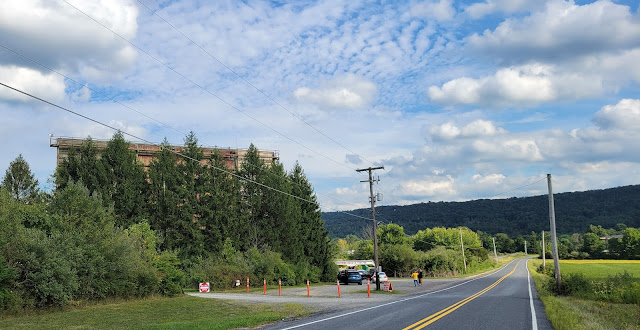 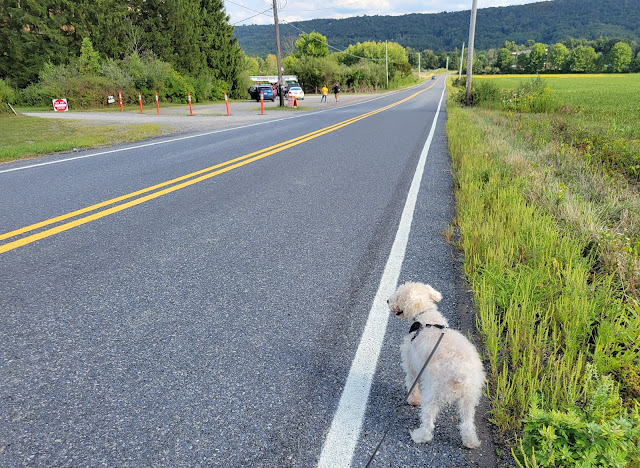 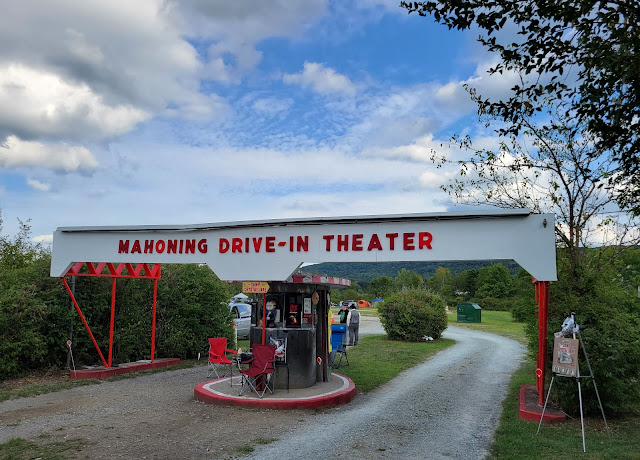 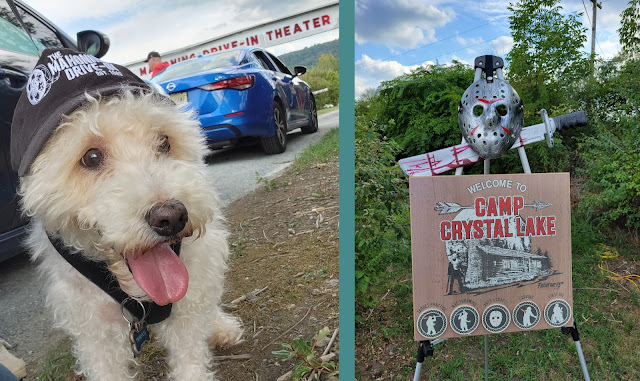 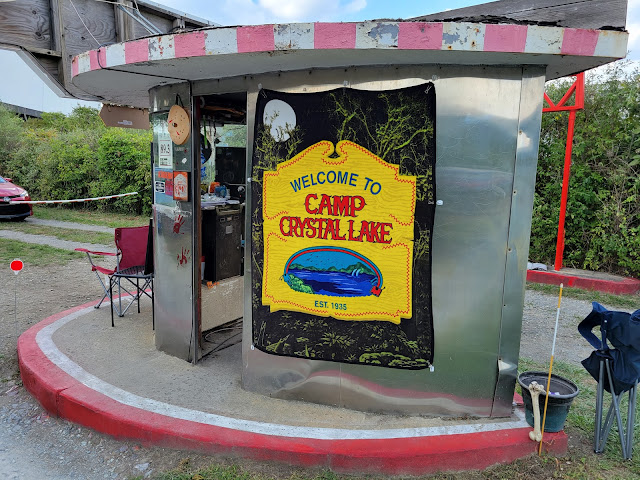 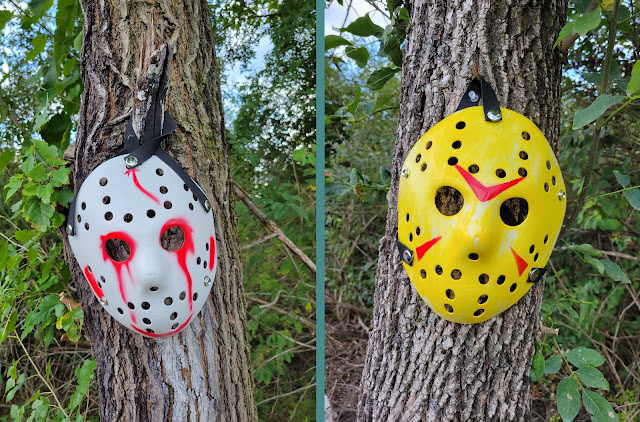 Perhaps "The Beast" is stretching the truth a bit.  We've brought an adorable fuzzy little boy named Harvey to menace the lot with his irresistible cuteness which stands in stark contrast to the mayhem being projected on the screen.
One of these days, I have to take a video of Harvey's reaction when we tell him that he's coming with us to the drive-in.  He's as happy as a kid on Christmas morning, hopping around and wagging his tail, and I can understand why.  He gets to walk around a great big lot in the warm sunshine and everybody who meets him fawns all over him.  He gets to meet the other dogs who come to the lot.  He gets snuggled with throughout the movie, and he gets lot of good things to eat. 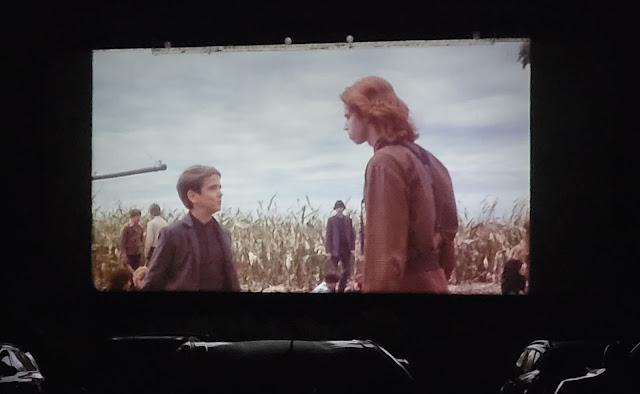 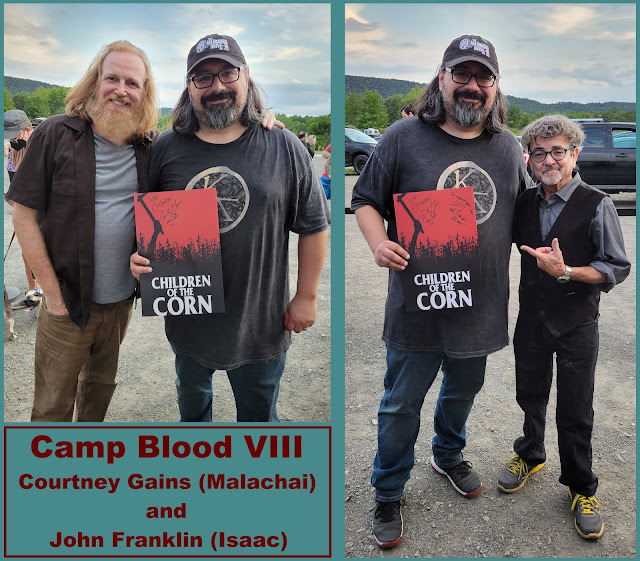 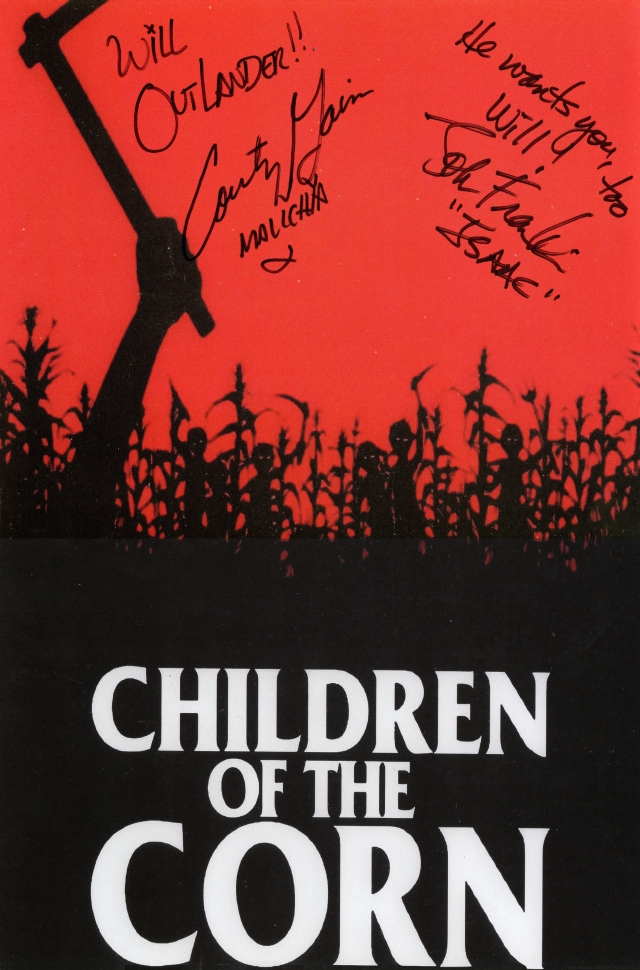 There were four special guests on the lot last night, all of whom worked on the first feature of the night, Children Of The Corn, including director Fritz Kiersch, and stars John Franklin, Courtney Gains and John Philbin.  I was fortunate enough to have the opportunity to meet Mr. Gains and Mr. Franklin, both of whom signed my Children Of The Corn poster and took a photo with me.
John Franklin and Courtney Gains are best known for their starring roles as the primary villains in Children Of The Corn.  Mr. Franklin plays Isaac, the leader of the cult of children who kill all of the adults in the small town of Gatlin, Nebraska, and Courtney Gains plays his right hand man, Malachai, who eventually betrays Isaac and takes over the town... for a little while.

Mr. Franklin has also appeared as Chucky in the first Child's Play movie, as well as Cousin Itt in The Addams Family and Addams Family Values, and Dr. Wachenstein's assistant Bobby in the batshit crazy mid-90's movie Tammy And The T-Rex, which I saw last year on Joe Bob's Last Drive In.  If you haven't seen that last one, definitely go out of your way to check it out.  It's pure insanity!
In addition to his acting career, Mr. Franklin taught high school English, and he co-wrote Children of the Corn 666: Isaac's Return, which was the sixth movie in the Children Of The Corn franchise, but was written as a direct sequel to the original film. 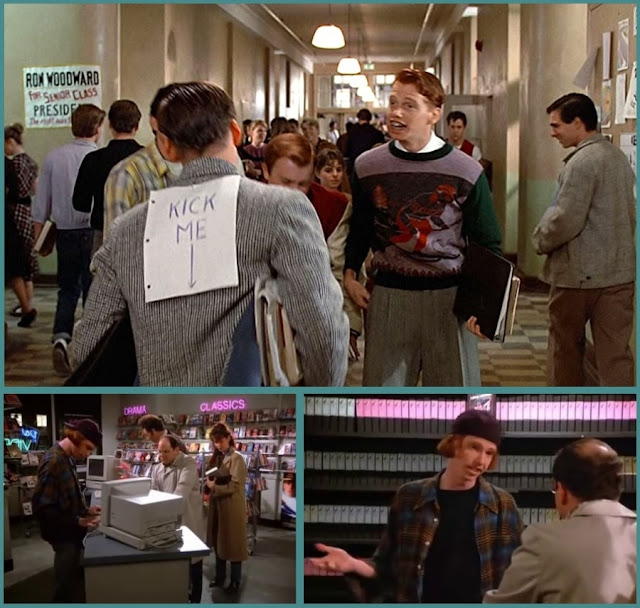 Mr. Gains is in a movie that I have watched hundreds of times in my life, and until yesterday I had no idea it was him.  He's the redhead bully that picks on George McFly in Back To The Future.  You can see him kicking Crispin Glover in the rear in the middle of the film.  He's also the guy who says "Scram McFly, I'm cutting in" during the Enchantment Under The Sea dance, before George musters up his courage to shove him over and kiss Lorraine.  He also appears in an episode of Seinfeld as a video store clerk who has an argument with George Costanza.  Seems like he's always getting into confrontations with people named George.
These are by no means a complete listing of all of the projects that these actors have worked on, but they're the ones that I am the most familiar with. 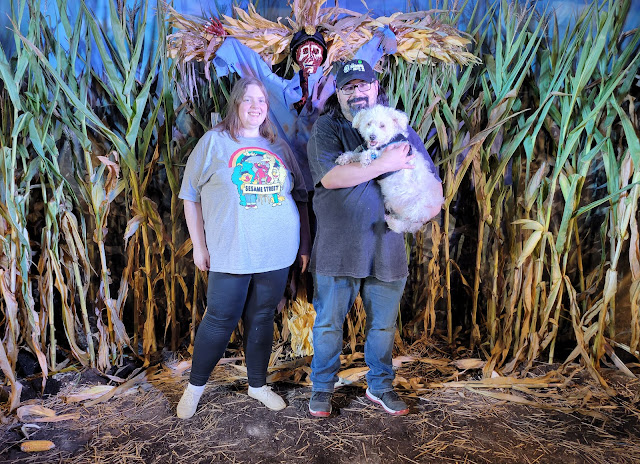 There was an amazing staging area with The Blue Man crucified in the cornfield for folks to take pictures.  Little Harvey doesn't usually look at the camera when we're trying to take a picture, but we got lucky this time. 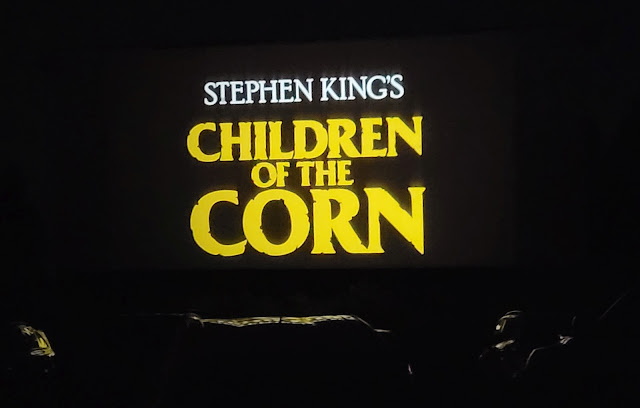 The first movie of the night was the film that all four special guests worked on - the 1984 horror classic Children Of The Corn.  It's based on the Stephen King short story of the same name which appears in his 1978 collection called Night Shift.  The movie is significantly changed from its source material, but it's a fun horror flick that I saw for the first time in my early teens.  Isaac and Malachai are among the scariest horror villains of their time, and the characters hold up after all these years. 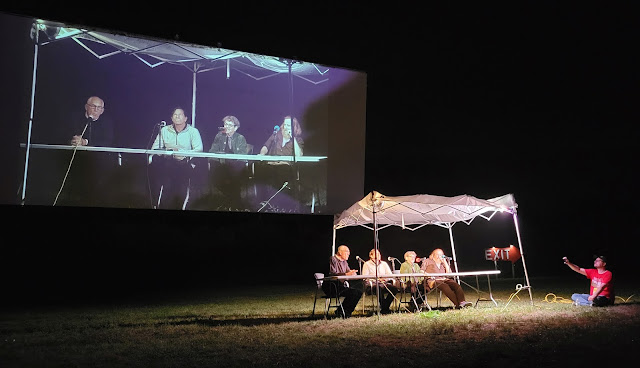 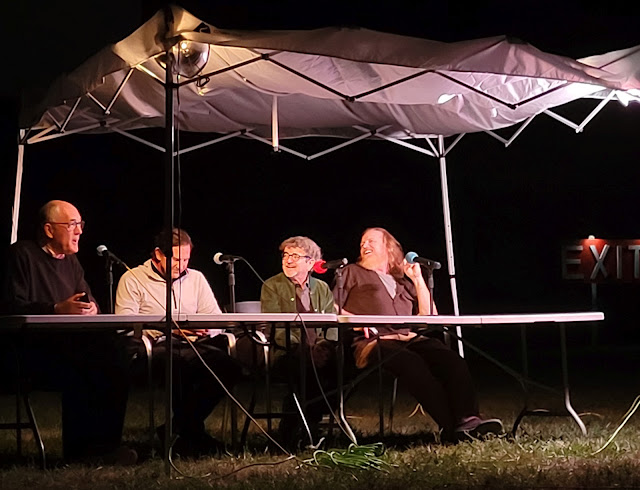 We were treated to an impromptu Q&A with Fritz Kiersch, John Philbin, John Franklin, and Courtney Gains and John Philbin under the screen after the screening of Children Of The Corn.  This was a wonderful surprise that wasn't advertised, and it made the event even more special and memorable. 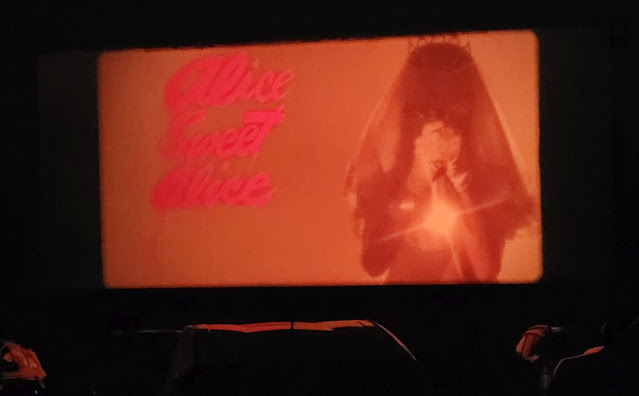 Alice Sweet Alice was the second film of the night.  This is an iconic horror movie from the mid 70's that I had always assumed that I've watched before, but nothing about this movie was familiar.  I'm pretty sure now that I've seen it at the Mahoning that this was my first time watching it, and I found it to be one of the most brilliant slasher flicks I've ever seen. 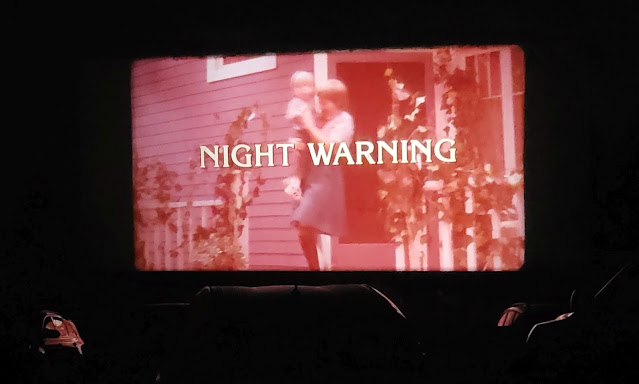 The last movie of the night premiered in theaters in 1981 and is better known for its original title, Butcher, Baker, Nightmare Maker.  It was given the name Night Warning when it was brought back to theaters two years later, and the 35mm print that was screened at Camp Blood must have been from the 1983 theatrical run because that's what was on the title card.
I saw this movie for the first time earlier this year on The Last Drive-In, and it's pretty twisted, with one of the most demented parental figures of any horror movie that I've ever seen.  It was ahead of its time for many reasons and was an excellent movie to close out the third night of Camp Blood. 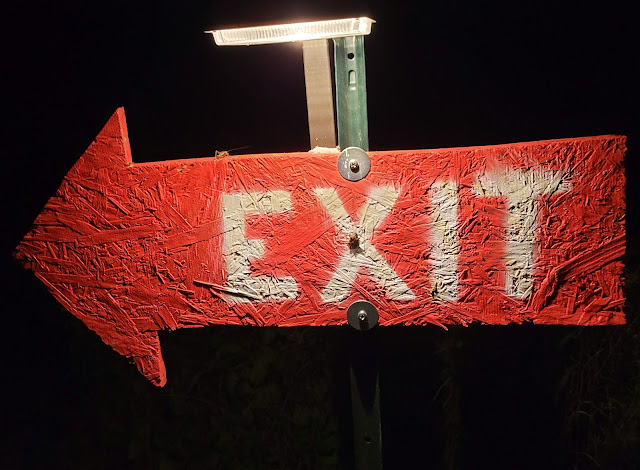 They're screening three more movies on Sunday for the final night of Camp Blood VIII, but I need a day to get some things done around the house.  We're going to be at the drive-in quite a lot this month, and as much as I'd love to hit Powerball and go to every show, there are some that we're just not going to be able to get to.  Next up is Back To School Weekend!