Let There Be Blood 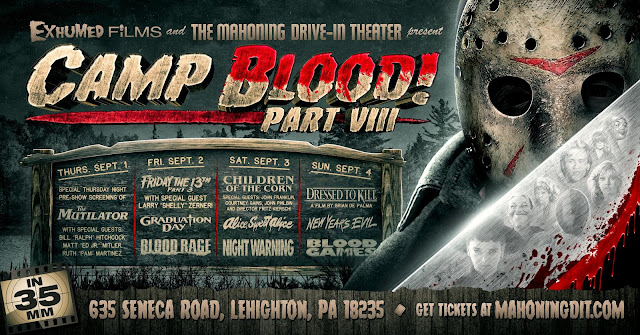 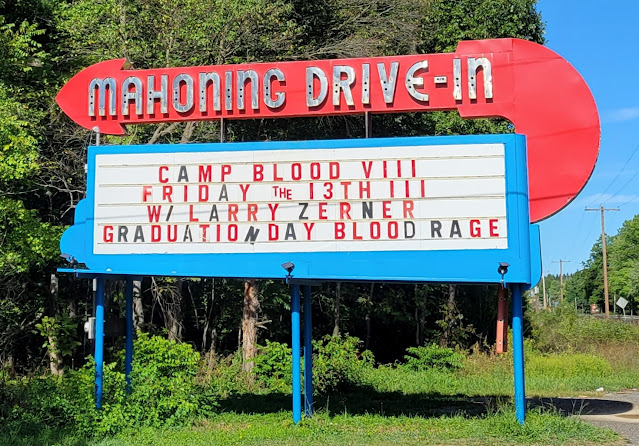 Camp Blood VIII Night Two
Friday The 13th Part 3 / Graduation Day / Blood Rage
Mahoning Drive-In Theater - Lehighton, PA
Last year's Camp Blood weekend was excellent, but they outdid themselves this year with an incredible lineup of films and special guests that to rival any weekend at the Mahoning.  We have tickets to Friday and Saturday and both nights have sold out.  Despite the fact that there are so many people, it doesn't feel overwhelming in the slightest; the lot has a very chill and relaxed vibe.  Speaking of relaxed, my new drive-in chair arrived just in time for Camp Blood. 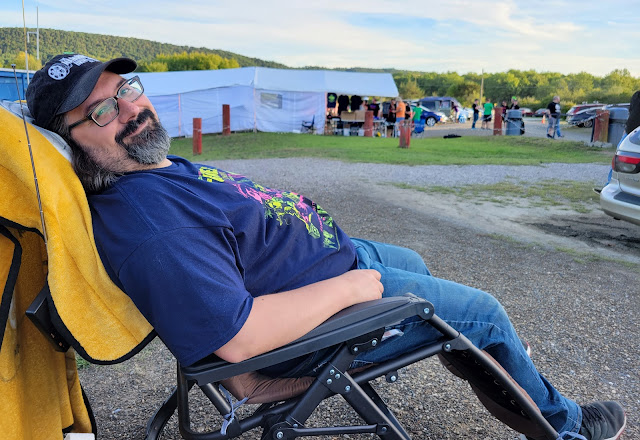 My wife ordered two of these chairs off of Amazon.  They've got soft cushions and a pillow, and they reclines to put your field of vision directly at the screen.  The only problem is that they're a little too comfortable, so I dozed off for a bit during the middle of the second feature.  In fairness, it could be because I had to wake up at five in the morning for work, but I think I'm going to use my wife's old chair for a little while.  It's a cheap-o like the red one that broke under me at the Patreon screening last week, but they work 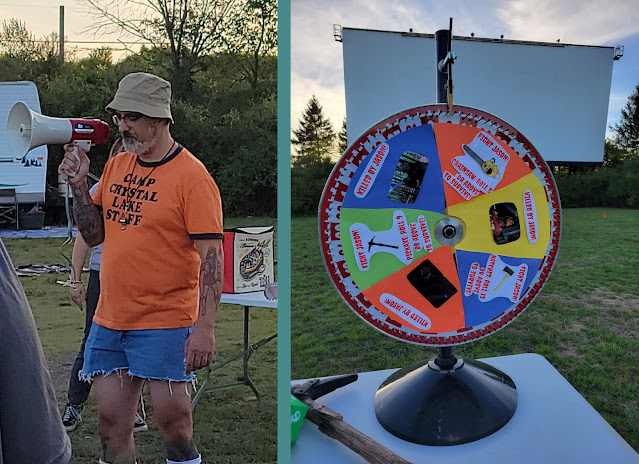 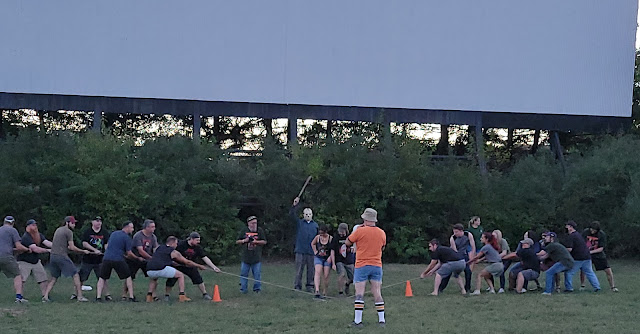 One of the things that makes Camp Blood unique is the games that are hosted by the camp counselors in the daylight hours before the movies.  This began on Friday night with the bodybag race, the eyeball toss, the Jason wheel and the tug-of-war.  There was also at t-shirt cannon featuring shirts "in sizes you don't want" at the end of the camping games.  I didn't catch a shirt, but I have a hunch that there may have been a few Goonies shirts in the mix. 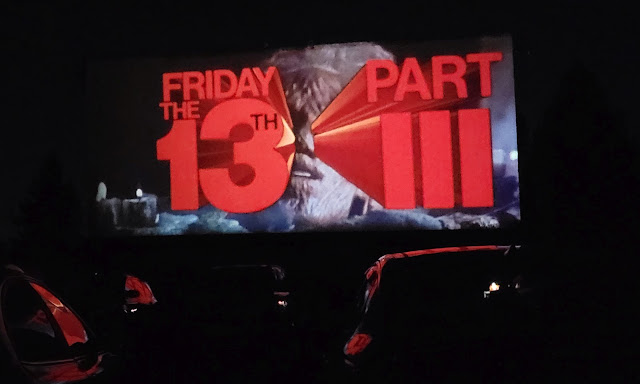 The first movie of the night was Friday The 13th Part III.  Special guest Larry Zerner gave a nice introduction to the horror classic that has just hit its 40th anniversary three weeks ago.  He played Shelly in the film, which is the character who's responsible for Jason Voorhees wearing what has become his trademark hockey mask.  Mr. Zerner was on the lot to meet fans, sign autographs and take pictures.
This chapter of the Friday The 13th franchise was filmed in 3-D.  It wasn't shown in 3-D on the Mahoning screen, but it's super obvious which of the scenes were shoehorned into the story to show off the technology.  My favorites are the yo-yo scene and Jason using a speargun. 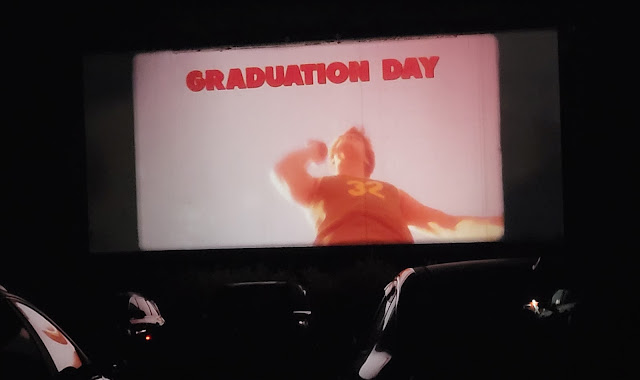 The next feature was the 1981 horror slasher flick Graduation Day.  I hadn't seen this one before last night, and there's still a good 20 minutes to a half hour that I haven't seen because I dozed off about halfway through the movie.  It's become a cult classic over the years, partially due to the fact that it features scream queen Linnea Quigley and Wheel Of Fortune co-host Vanna White in supporting roles.  It's a fun cheesy horror movie from the early 80's.  I'm not going to go so far as to call it a "must see", but I'm glad to have had the chance to see a 35mm print of it at the drive-in, even if I did sleep through some of it. 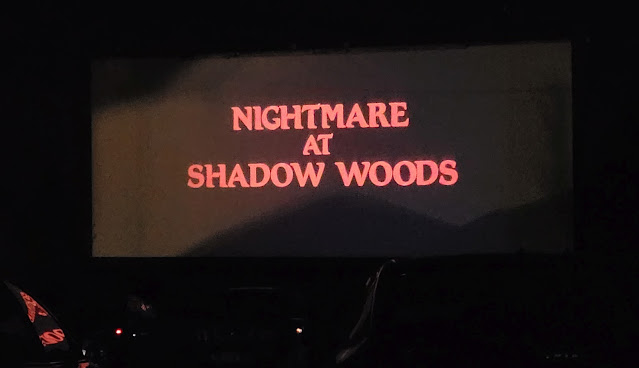 The last movie of the night was the twisted horror classic Blood Rage.  I first saw this movie four years on Joe Bob's Dinners Of Death special.  The version that was shown at Camp Blood was from a cut of the film that was shown theatrically in 1987, when it went under the name of Nightmare At Shadow Woods.  Unfortunately, this print cut out a lot of the gore and special effects, but it was still a hell of a lot of fun.  The story starts at a drive-in theater in the mid 70's where two grade-school aged identical twin brothers, Todd and Terry, witness their mother hooking up with her boyfriend.  This warped Terry's mind and inspired him to take a hatchet and murder a teenager who was having sex in another car.  Witnessing this murder makes Todd catatonic, so Terry takes advantage of this to frame his brother for the crime.  The story then fast forwards ten years when Todd escapes from the mental hospital just in time for Terry's murderous rage to reawaken. 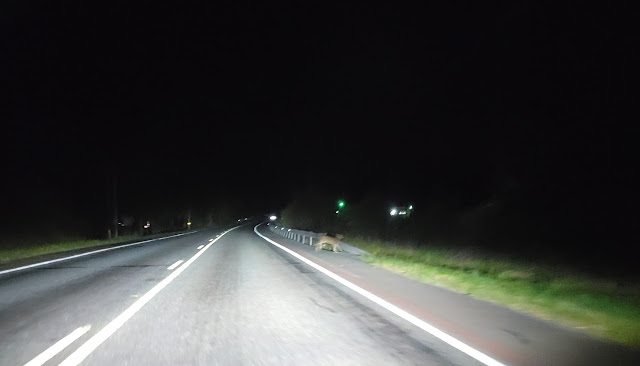 And that's a wrap on Night Two.  We'll be back later tonight for Night Three of Camp Blood.