Che Guevara And Debussy To A Disco Beat 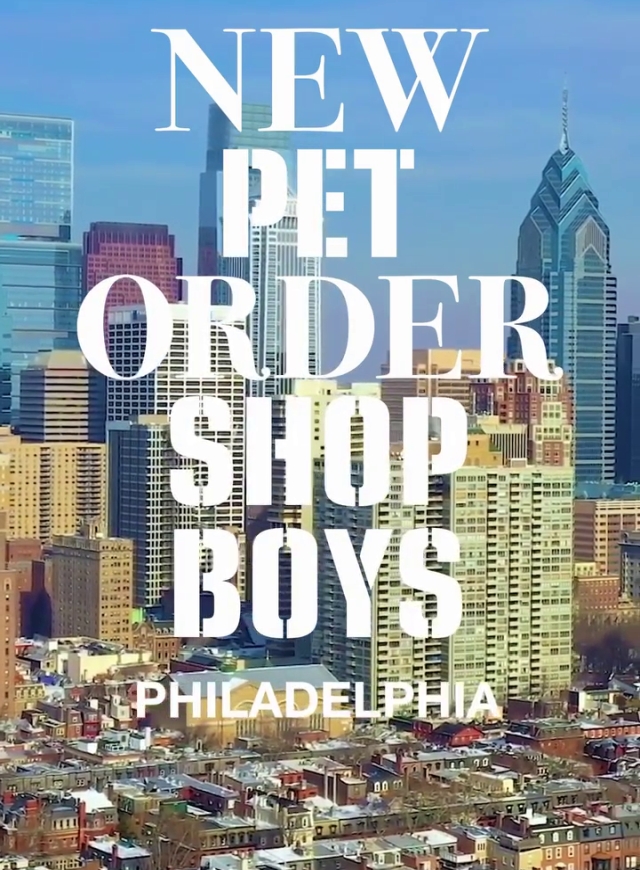 The Unity Tour
New Order and Pet Shop Boys with special guest Paul Oakenfold
Mann Center For The Performing Arts - Philadelphia, PA
There are a lot of different styles of music that I listen to and enjoy, but there's nothing that makes me happier to listen to than new wave and synthpop.  It's something that I've loved for as long as I've known what music was.  In some other level of The Tower (or the multiverse, for those of you who aren't Stephen King readers), I'm sure that there is a version of me that has hit up every club on the east coast and spent the night dancing his ass off to these songs, but in this reality, it's the kind of music that makes me lay back on the sofa, close my eyes, and drift off to a happy place in my mind.

Over two and a half years ago, two of my favorite groups announced that they would be co-headlining a tour that would bring them to Philadelphia on September 11th, 2020.  I bought tickets to see New Order and the Pet Shop Boys on The Unity Tour as soon as they went on sale in February 2020.  Not long after that, the first cases of Covid-19 were reported in the United States, and we were all on lockdown by Easter Sunday.  At first, there were reports that we would all shelter in place for maybe four weeks, and all of this would blow over.  Surely, things would be back to normal by September 2020, right?
In May 2020, it was announced that The Unity Tour would be postponed, and on June 11th, we were told that the concert was rescheduled for September 25th, 2021.  By June of the following year, the Covid variants caused the concert to be postponed a second time to September 25th, 2022. 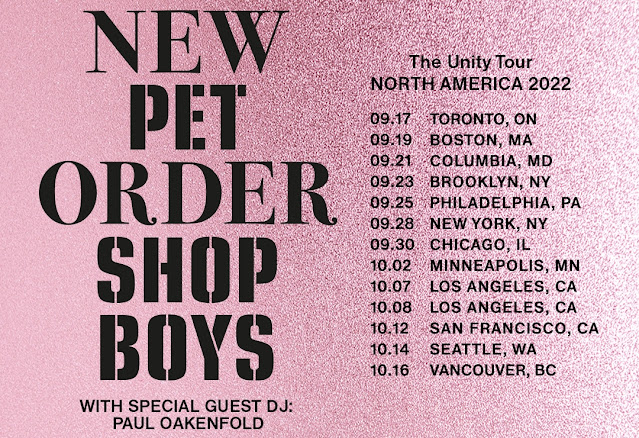 When the announcement was made with the 2022 tour dates, I had almost resigned myself to the concert never happening.  Between the challenges of international travel and the fact that the concert was being rescheduled for over two years, I thought that the chances were pretty good that the artists plans would change and the tour would end up getting scrapped as a result.  I'm very happy to say that this didn't end up being the case. 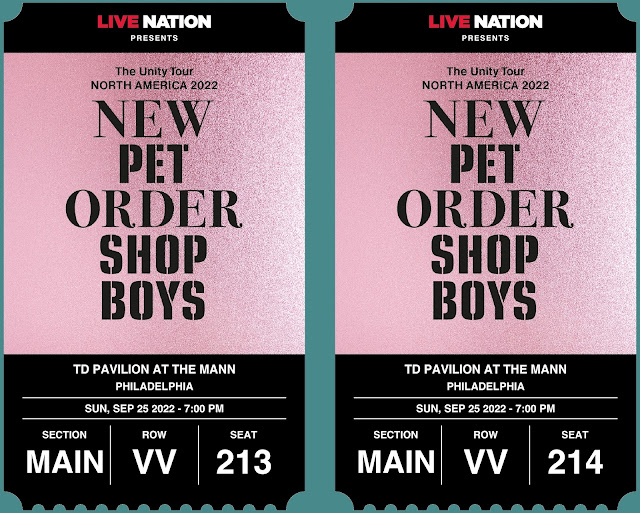 Unless something unexpected pops up, the Philadelphia stop of The Unity Tour last night was our last concert of 2022.  It was absolutely worth the wait!

The show opened with a DJ performance by Paul Oakenfold.  I'm not very knowledgeable about him or about trance in general, but I have liked what I heard and I enjoyed his set, which led directly into the start of the Pet Shop Boys.  The only thing that was less than awesome was the fact that his set was scheduled to begin at 6:30 and he didn't take the stage until nearly 7:00, so we missed out on hearing nearly a half hour of his set. 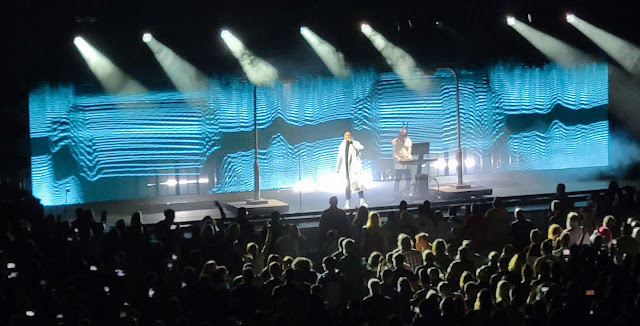 The Pet Shop Boys have been at the top of my list of groups that I've wanted to see for a long time, and they absolutely knocked it out of the park with an incredible set.  They opened with Suburbia, followed by Can You Forgive Her, and Opportunities before launching into their mashup of U2 and Boys Town Gang: Where the Streets Have No Name (I Can't Take My Eyes Off You).  This was never one of my favorite songs when it would come on the radio, but seeing it performed live is a whole different experience, and it gave me a much greater appreciation for it.  When the crowd burst into song with Neil Tennant during the transition into the chorus of I Can't Take My Eyes Off Of You, I found myself singing and bopping along with everyone around me - absolutely incredible experience!

Next up came three of my favorite and most cynical songs from the group: the 1987 hit Rent, the first single from their 1999 album Nightlife, I Don't Know What You Want But I Can't Give It Any More, and the first single from their 1990 album Behaviour, So Hard.
After that, they played a song from their third album, Introspective.  It's called Left To My Own Devices, and it's a song that I've come to love more and more as I get older.  It's a song about someone who just wants to live their life their way and approach the world on their own terms without concerning themselves with having to keep up with appearances for the acceptance of others.  I'm not sure if this was the intention, but my takeaway from this song is that if the people in my life would just back up and let me sort things out in my head and go about things in my own way, everything would be alright and I'll probably end up at the same place that these people want me to be in the first place.  However, if I've got someone breathing down my neck and forcing me to do things their way, I will resist with every fiber of my being.  This has been a consistent struggle throughout my life when dealing with other people, whether it be school, work, relationships, friendships or anything else.  It's a big part of why I was such a mess in high school and why I didn't go back to college until I was 27 years old.  When I did finally go back, I did very well.  I graduated Summa Cum Laude and didn't have anything less than a 4.0 in any of my courses until my Junior year, but this is because I was able to go back on my own and approach things in my own way without being forced to conform to someone else's opinion on the way that I ought to be doing things.
Wow, I really went off on a tangent there, didn't I?  Moving on... 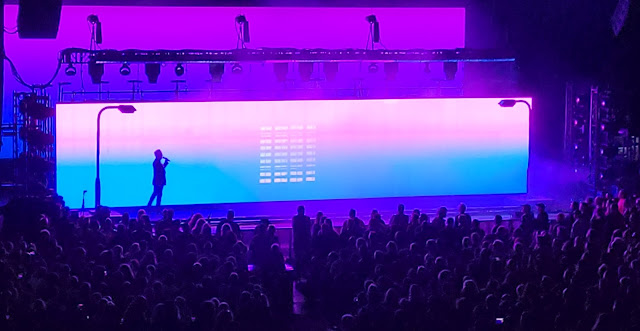 The ninth and tenth songs of the set were two of their biggest hits and two of my favorite Pet Shop Boys songs.  First came Domino Dancing, which was amazing, especially when the crowd erupted to sing the chorus.  Next was Love Comes Quickly, which began with the screen dropping down, with only the silhouette of Neil Tennant visible as he walked toward the center of the stage singing. 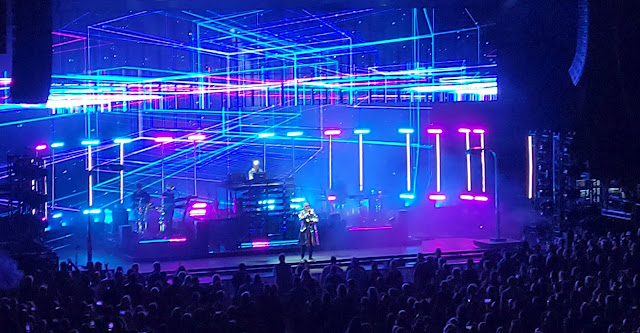 Losing My Mind came next in the setlist.  It's a song that was originally written for an early 70's musical that I'm not familiar with, but it was popularized by Liza Minnelli in the late 80's.  Her cover was produced by the Pet Shop Boys, who also recorded a version of the song which was released as a B-side to their single, Jealousy. 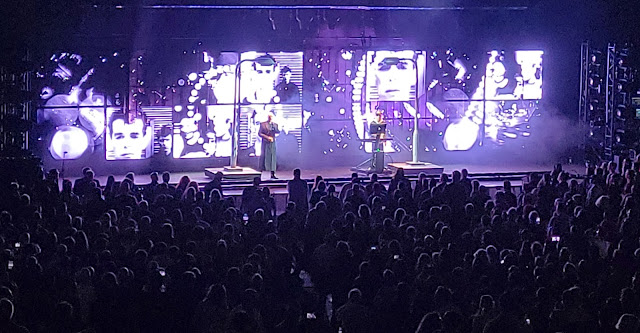 Next came another cover, but one that reached much greater heights than to be released as a B-side: Always On My Mind.  This song has been recorded by dozens of artists over the past fifty years.  The Elvis Presley and Willie Nelson covers are probably the most well known versions, but the one recorded in 1987 by the Pet Shop Boys will always be my favorite.  Seeing it performed live was simply incredible. 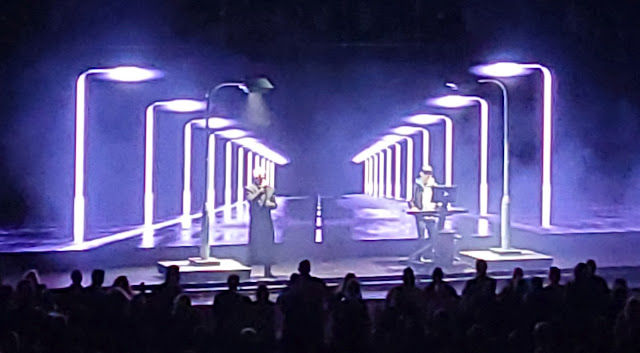 The show entered its fourth quarter with Dreamland, Heart, It's Alright and Vocal before closing out the main portion of the show with their 1987 hit single, It's A Sin.  Afterward, they took the stage for a two song encore that began with my favorite Pet Shop Boys song, and one of my favorite songs from any artist or genre: West End Girls.  It's one of those songs that I absolutely love to play when I'm driving alone at night.  It has a surreal quality that takes me out of whatever is going on in my mind and puts me in a happy and relaxed headspace.  They closed out their set with one of the most beautiful songs ever recorded: Being Boring.  It was a perfect end to a perfect set! 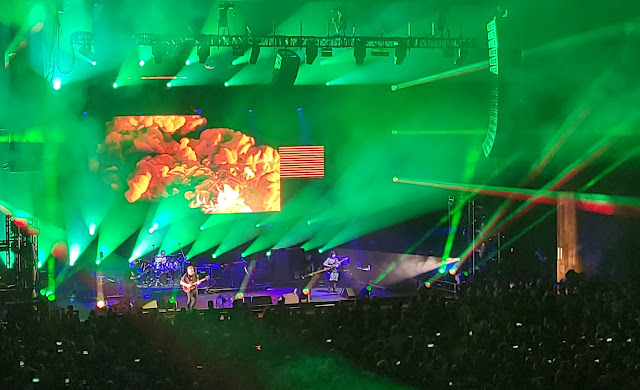 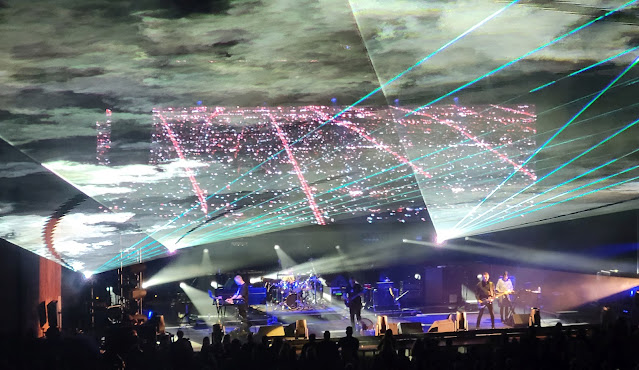 New Order began their set with two of my favorite songs: Regret, from the 1993 album Republic, and Age Of Consent, from the band's second studio album which was released ten years earlier, Power, Corruption & Lies. 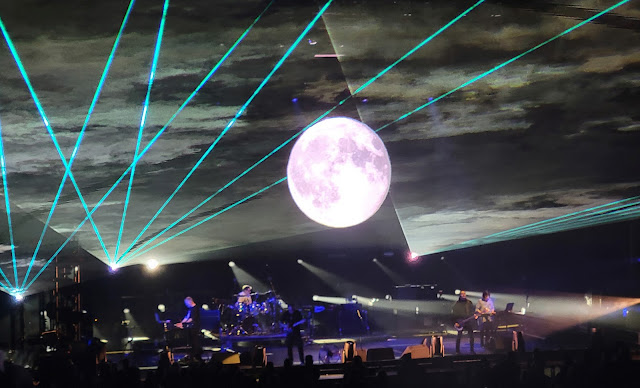 Next up was a song called Restless that I was not familiar with.  It was released in 2015 as the first single from New Order's tenth studio album, Music Complete.  This was followed by one of my favorite songs, their 1981 debut single, Ceremony.  The lyrics were written by Ian Curtis for Joy Division, so this single is a bridge between the band that Joy Division was and the band that New Order would go on to become. 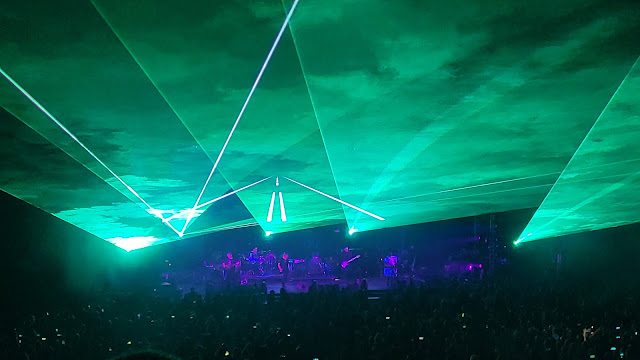 The fifth song of the set was Your Silent Face, which appeared on the cassette release of Power, Corruption & Lies, but was not on the record for some reason.  This was followed by two more recent songs that I am not very familiar with: Be A Rebel (2020) and Guilt Is A Useless Emotion (2005). 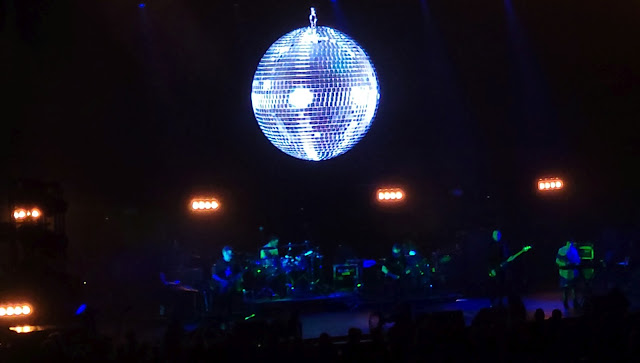 Bizarre Love Triangle was next, which is another one of my favorite songs of the 80's.  It's one of those songs that made me wish that I was born about 15 years earlier (minus the social anxiety) so that I could have been old enough to hit the clubs when this song was new.  If this song doesn't make you want to move, check your pulse.  Next up was Plastic, which is another song from 2015 off of Music Complete, which is a dance track that I've never heard before last night, and one that fit the flow. 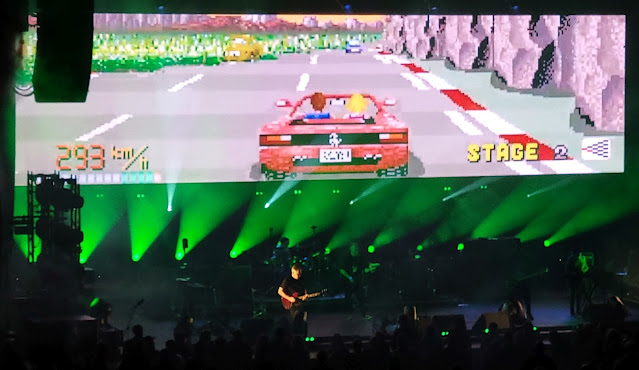 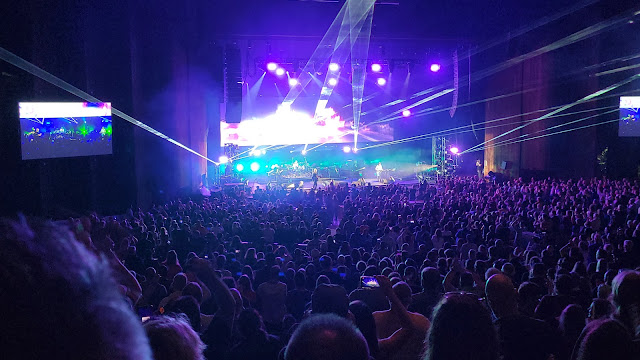 The main setlist finished very strong with three of the biggest New Order hits ever recorded: True Faith, Blue Monday, and an incredible performance of Temptation that was one of the best moments of the night. 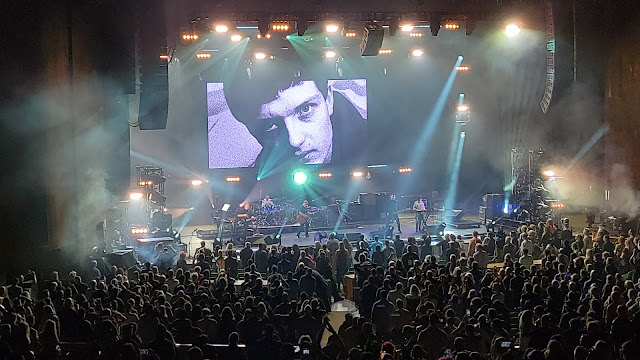 New Order came back to perform a two song encore of Joy Division songs.  First was Decades, which was the final song off of Joy Division's final album before the death of Ian Curtis.  They finished the night off with one of the most haunting and brilliant songs ever recorded: Love Will Tear Us Apart.
Here are the Pet Shop Boys and New Order setlists from the Philadelphia concert. 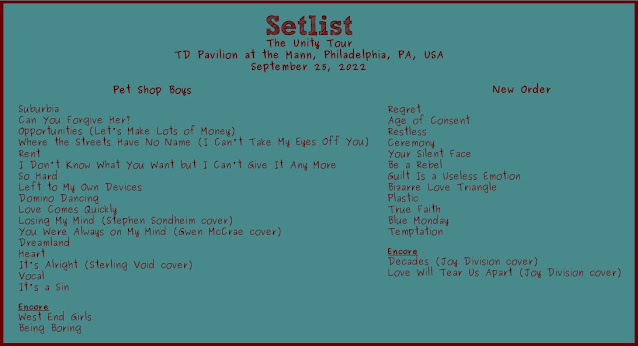 I was excited to see both groups when I bought tickets to this show, but if you had asked me at the time, I would have told you that I was more excited to see New Order, however I left this concert with the feeling that the Pet Shop Boys stole the show.  While I enjoy hearing a band's later work, it was a bit disappointing that some of New Order's most iconic songs were left out of the show entirely, including Thieves Like Us, Love Vigilantes, The Perfect Kiss, Round & Round, and Shellshock.  I get it... they can't play everything from their catalog, but I still think this show might have flowed better if New Order took the stage first with Pet Shop Boys going on second.