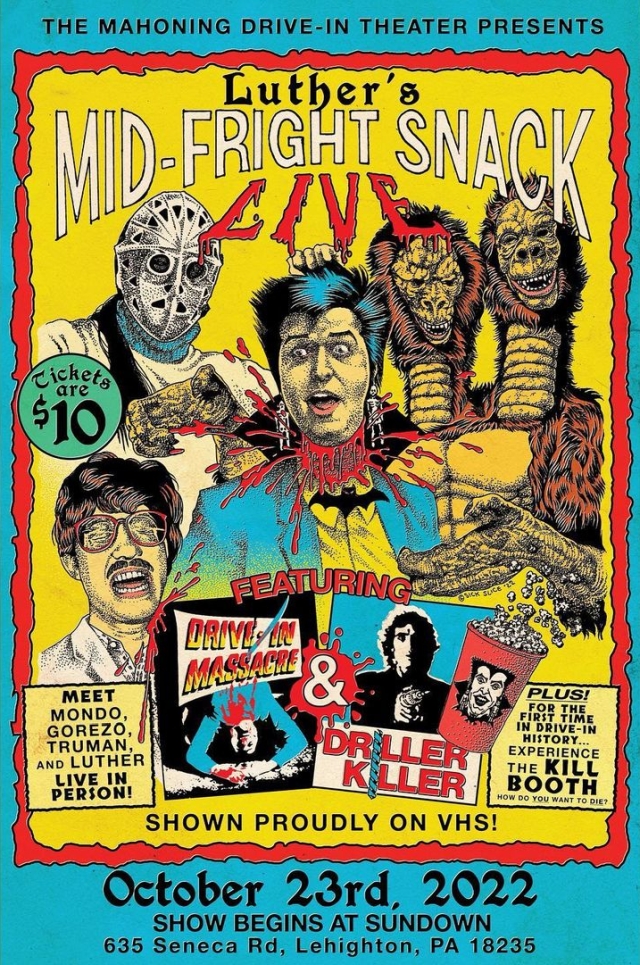 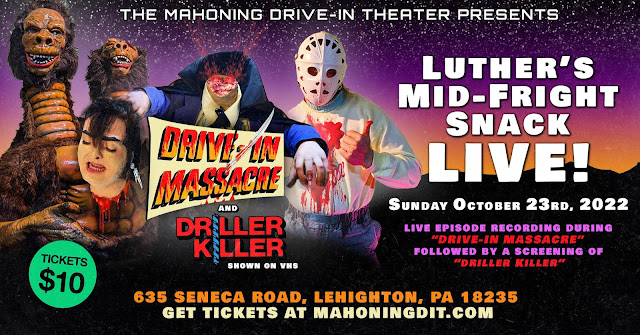 Luther's Mid-Fright Snack presents Drive-In Massacre and Driller Killer
Mahoning Drive-In Theater - Lehighton, PA
Hayden Hall is one of the artists who creates posters for the Mahoning Drive-In Theater.  I'm betting that this one is one of his favorites because this event is all about the show that is hosted by his alter-ego, Luther Vangross.  The show is called Luther's Mid-Fright Snack, and it's part Svengoolie, part UHF, and part monster comedy all thrown into a blender to create a truly fun and unique experience.  But don't take my word for it... head over to YouTube and check it out for yourself. 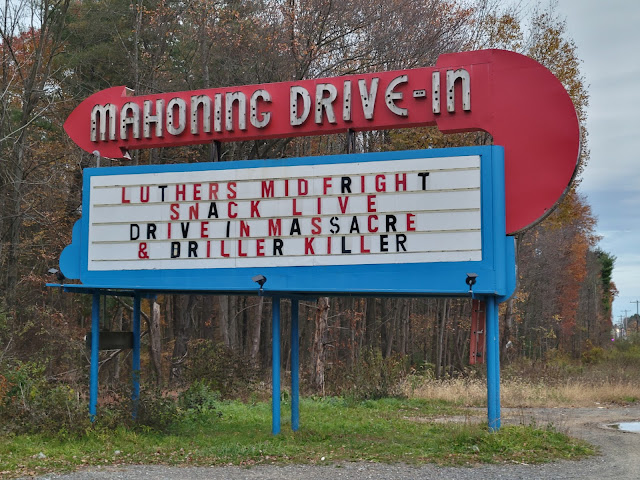 Our drive to the Mahoning was an experience in and of itself because of what was playing on the radio.
The fifth game of the NLCS started just after 2:30 yesterday afternoon.  The Phillies hadn't made it this far in the post-season in 13 years.  In fact, this is only the sixth time that they've reached the NLCS in my lifetime.  If you're not a baseball fan and this all sounds Greek to you, please take my word for it that this is a pretty big deal for me.
I was watching the game on television before we left for the drive-in.  Rhys Hoskins hit a two run homer in the bottom of the 3rd to give the Phillies an early 2-0 lead over the Padres.  Juan Soto responded with a solo shot in the top of the 4th to cut the Phillies lead in half.  The game settled down a bit for the next few innings, but the rain in Philadelphia was getting pretty bad, and it was clear that the umpires were not going to call for a delay come hell or literal high water.  By the time Rob Thomson brought in Seranthony Domínguez to pitch with no outs and a runner on first in the top of the 7th, it had turned into a torrential downpour.  Seranthony is one of the best relief pitchers in all of baseball, but it was so ridiculously wet that he couldn't get a grip on the ball and he ended up throwing three wild pitches in the inning which led to the Padres taking a 3-2 lead.  It wasn't long after that inning ended that we headed out for the drive-in and put the game on the radio.
The Phillies were still down 3-2 in the bottom of the 8th inning when we turned onto Route 443, just a few miles away from the drive-in.  As we made the turn, I mentioned to my wife that all we need is for J.T. Realmuto to get on base to set the table for Bryce Harper to knock it out of the park and give the Phillies the lead, and I'll be damned if that's not exactly what happened!  The 8th inning ended with the Phillies clinging to a 4-3 lead just as we were pulling onto the lot.  We parked in our usual spot and held our breath as David Robertson walked two consecutive batters to give the Padres runners on 1st and 2nd with one out.  Rob Thomson made a gutsy move by bringing in Ranger Suárez to pitch.  He recorded the last two outs to give the Phillies the win that will send them to the World Series for just the eighth time since the franchise was founded in 1883.  Let that sink in for a moment.  This team has played professional baseball for the past 139 years and they have made it to the World Series eight times.  Needless to say, I needed a minute to calm down before heading over to the merch table to pick up one of the posters for last night's event at the Mahoning. 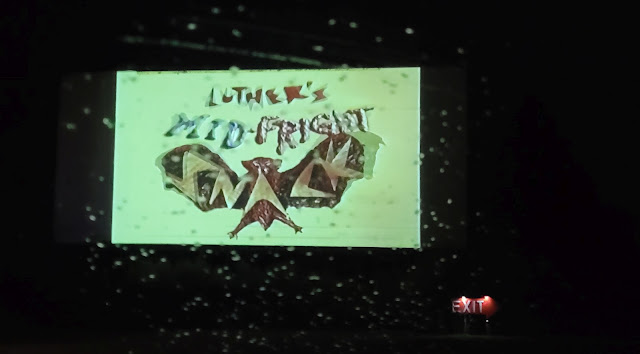 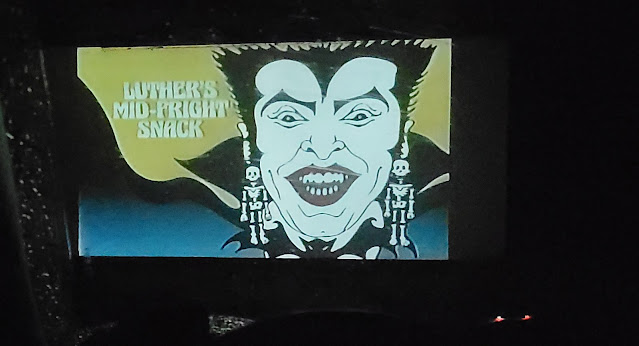 Luther and the gang had set up a tent at the front of the lot where they recorded an episode of Luther's Mid-Fright Snack.  The camera feed was patched into the digital booth and the movies were being played from VHS.  They were both projected onto the big screen seamlessly throughout the night.  It really was very impressive how it all came together. 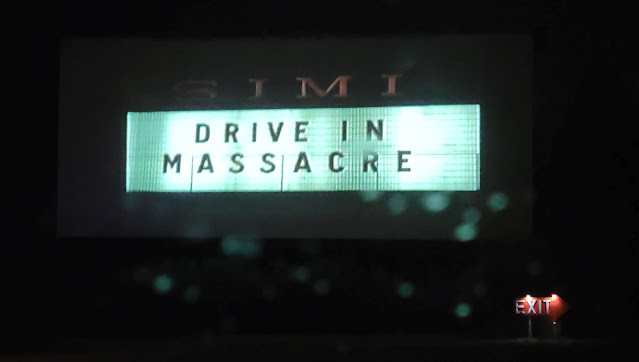 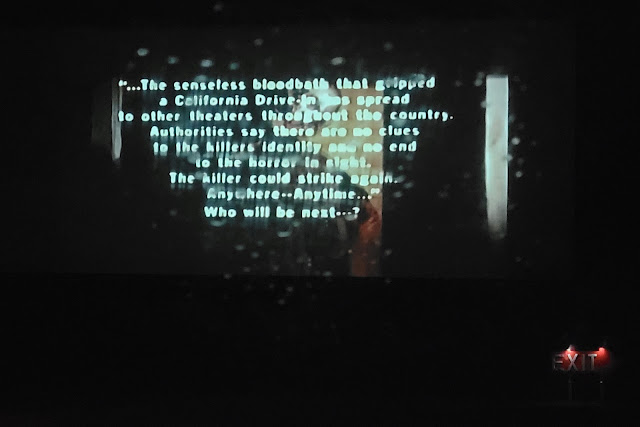 The first movie of last night's double feature, and the one that was being hosted by Luther for the show that was being recorded, was the 1976 horror flick: Drive-In Massacre.  This is a movie that I've actually watched at a drive-in theater before last night.  It was shown as a part of a vintage horror double feature (along with The Gates Of Hell) twelve years ago at the Laurel Drive-In Theater.  Until we discovered the Mahoning, this was the only time I had ever gotten to see decades old horror films projected from their original 35mm prints at a drive-in.
As the name suggests, there's no better place to see Drive-In Massacre than at a drive-in theater.  It was co-written by Buck Flower and it's bloody and cheesy in equal measure.  It tells the story of a murderer who kills people at the drive-in theater while they're watching the movie.  For some reason, the fact that the killer is still on the loose isn't enough to keep people from coming back to the drive-in the very next day, which gives the killer a new audience to pick through.  The film ends without the killer being identified, along with a warning that the murders have continued at drive-in theaters around the country, and that the killer could strike again. 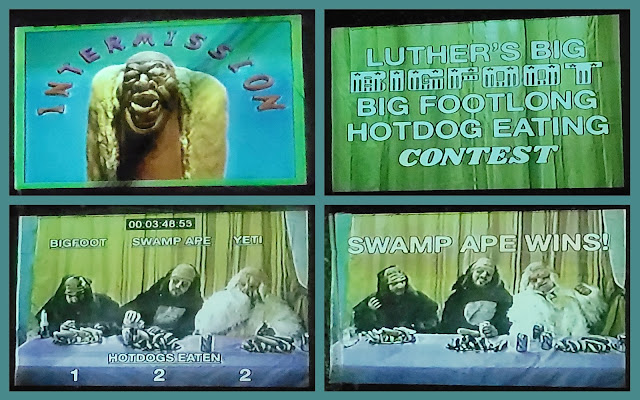 The intermission at last night's event was like nothing I had ever seen at the Mahoning (or anywhere else) before.  It featured a hot dog eating contest between Bigfoot, Swamp Ape and Yeti that went on for over five minutes.  By the time it was over, Yeti's total was negative 2, which means that he not only regurgitated the two hot dogs that he had eaten during intermission, but two additional ones. 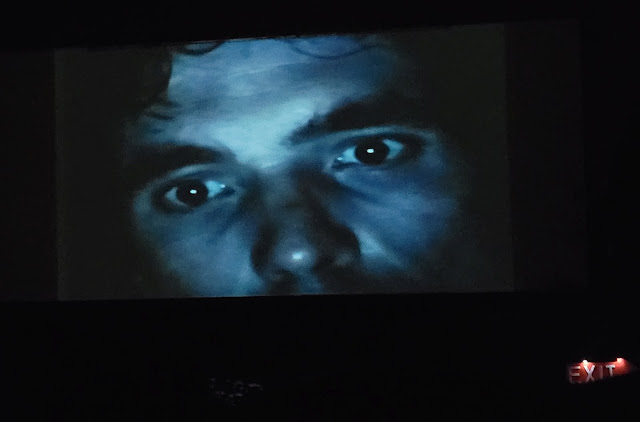 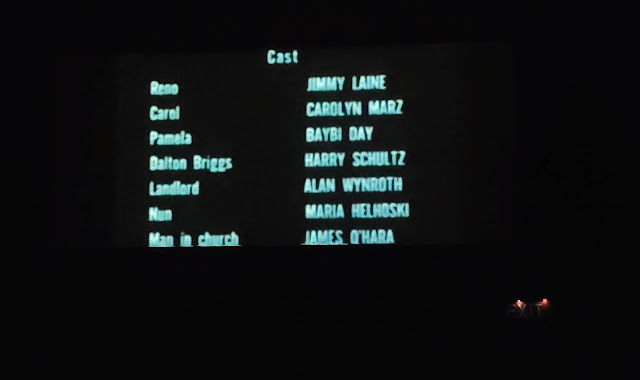 The final feature of the night was the infamous 1979 slasher: The Driller Killer.  I thought I had seen this before, but I was getting it mixed up in my memory with The Slumber Party Massacre, whose villain is also known as the driller killer.  The one we saw last night is a creepy flick with a lot of late 70's New York atmosphere, but The Slumber Party Massacre movies are more my cup of tea than this.  Still, I'm glad to have had the opportunity to see it at the drive-in.