Your Mind Is So Inviting 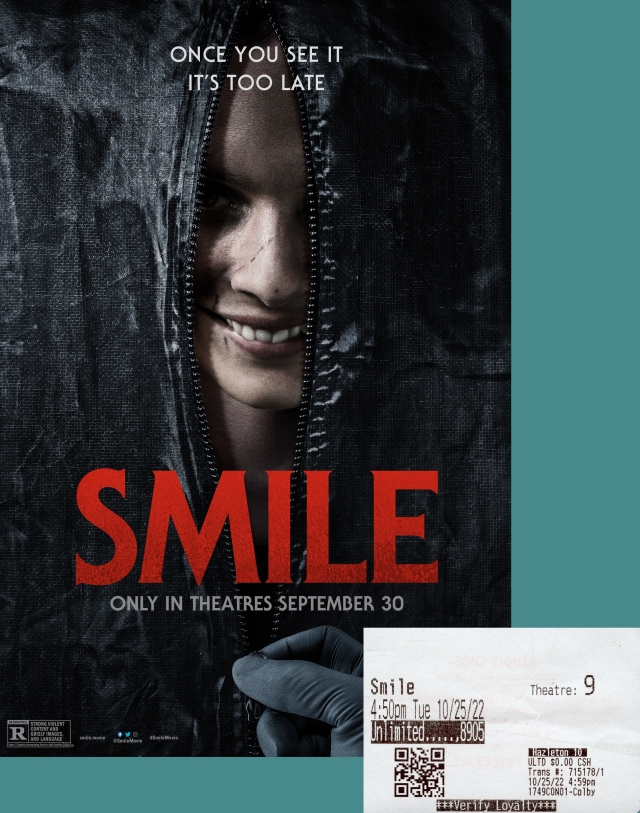 Smile
Paramount Pictures (2022)
When I first saw the poster and the other advertisements for this movie, I thought it was a sequel to the Blumhouse horror film Truth Or Dare.  The menacing smile looks very much like the creepy smile on the faces of the hallucinations that when they asked the titular question in the 2018 film, and it's not uncommon for a movie sequel to have a different name than the first film in the series.

The movie stayed on my radar because of one of the most creative marketing campaigns for a horror film that I've ever seen.  In the weeks leading up to the movie's premier, actors promoted the film by appearing in public places.  They didn't speak, and they barely moved a muscle.  They just sat there with a thousand yard stare with an absolutely terrifying smile on their face.  They appeared at many different locations, including the street behind the anchors on The Today Show, but the ones that got the most attention were sitting in premium seats behind home plate at various ballparks throughout the country.  Let me tell you... these folks were committed to the bit.

I've been to games in September I can vouch for the fact that the ballpark can get pretty chilly.  This woman is sitting at Yankee Stadium while it's pouring buckets.  Everybody else at the park made their way to shelter and maybe grabbed a bite to eat while they waited out the rain delay, but not this lady.  They might have to come up with an Academy Award for Best Performance In The Promotion Of An Upcoming Film just so they could award it to her. 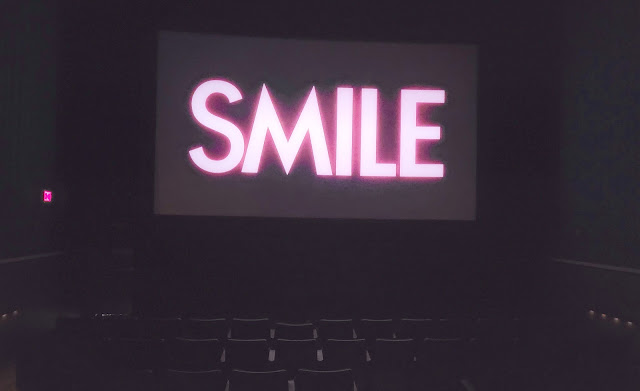 The smile on the characters faces may have reminded me of Truth Or Dare, but the film didn't make me think of it at all.  It actually reminded me of a Sam Rami horror film from 2009 called Drag Me To Hell.  Both films tell the story of a young woman who is cursed and suffer hallucinations which are meant to terrify the victim for a short time before causing their death.
In the years that followed its release, there has been a great deal of discussion about how the plot of Drag Me To Hell is an allegory for people who suffer from eating disorders.  As someone who suffers from binge eating disorder and who has done a considerable amount of research on the subject of eating disorders in general, I can absolutely see the connection here.
Much like the 2009 film, there's a lot of subtext to be found in Smile, which has a villain that struck me as the personification of depression, mood disorders, and mental illness in general.  It stars Sosie Bacon (the daughter of Kevin Bacon and Kyra Sedgwick) as Dr. Rose Cotter, a psychiatrist who talks with a patient who describes seeing and hearing things that are driving her mad and trying to kill her.  These things take the form of a person with a creepy smile.  Sometimes that person is a stranger, and sometimes it's a person that she knows, including people who are both living and dead, but only she is able to see and hear them.  Not long after describing this to Dr. Cotter, the patient's face becomes locked into a creepy smile while she cuts her throat while the doctor watches.  Shortly after witnessing this death, Dr. Cotter begins to experience the same things that her patient described, which begins a race against time for her to discover what is happening and to put a stop to it before she suffers the same outcome.
There's no amount of praise I could give to Smile that would do it justice.  The cinematography is gorgeous, its use of music is effectively frightening from the title card to the end credits, and the performances are top notch all around.  The story that it tells is both scary as hell and though provoking.  This one is destined to be a top shelf horror classic that will be watched and discussed for many years to come.