I Will Chill Your Brains For The Purposes Of Garnishment 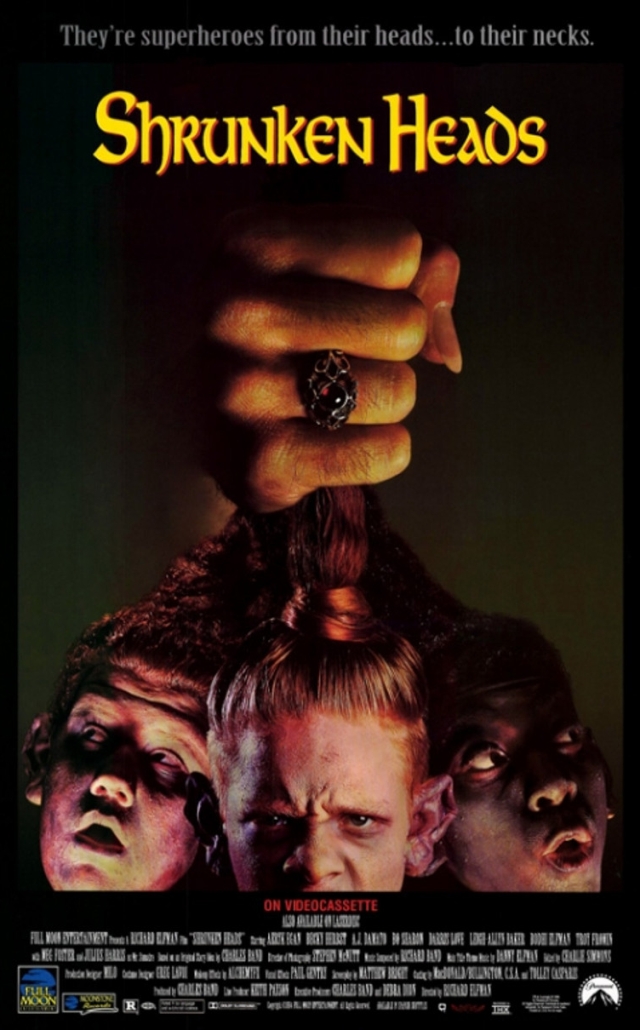 Shrunken Heads
Full Moon Entertainment (1994)
I've never seen or heard of Shrunken Heads before this week, but we were scrolling through Tubi looking for something to watch when this description stopped us dead in our tracks: 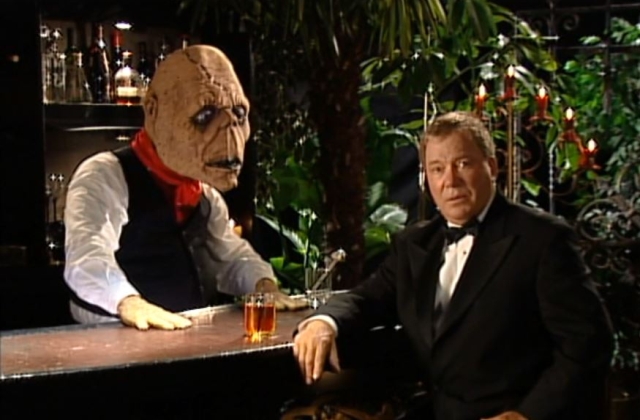 In addition to never having heard of Shrunken Heads, I had no idea that William Shatner once worked as a horror host.  William Shatner's Full Moon Fright Night was broadcast on the Sci-Fi Channel in 2002, and I think that the only thing that's more chock full of cheesy hilarity than this movie is the segments featuring Captain Kirk and his monster bartender riffing on the film.  The conversation that these two have when the movie is over may be the most bizarre thing I have ever seen Mr. Shatner do on camera, including his performance of Rocket Man at the 1978 Science Fiction Film Awards.

The movie that Mr. Shatner is hosting is unlike anything that I've ever seen before.  For the first twenty minutes or so, it feels like you're watching an episode of Goosebumps, or a kids movie from Nickelodeon or The Disney Channel.  It was a bit jarring when the first F-bomb dropped.  It then gets progressively darker and stranger, but it somehow still maintained an overall tone as a family film.  It had me wondering what audience the filmmaker was aiming for.
If you want to watch this absolute gem of a B-movie without any spoilers, stop here, go pop some popcorn, and then click on the image below to stream William Shatner's Full Moon Fright Night presents Shrunken Heads for free on Tubi. 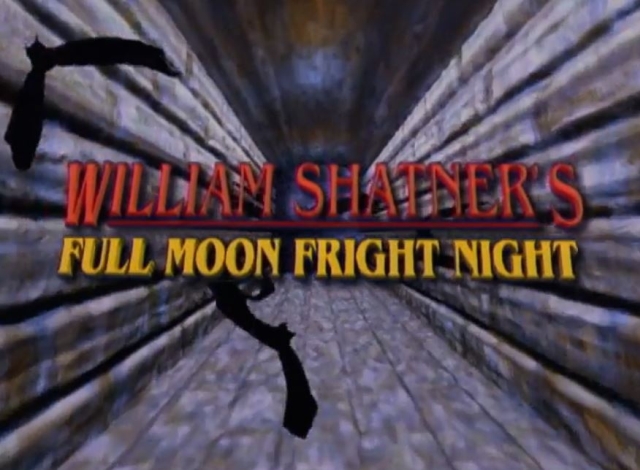 Shrunken Heads stars Aeryk Egan as Tommy, Bo Sharon as Billy, and Darris Love as Freddy - three middle-school aged friends living in New York City.  They buy comic books from Mr. Sumatra, an old man who runs a small newsstand.  Mr. Sumatra is played by blaxploitation film icon Julius Harris in a role that has all of the best lines in the picture.  His character is a voodoo priest and a retired Haitian police officer who looks after the three boys and steals every scene that he's a part of.  Mr. Sumatra notices that the three boys are being bullied by The Vipers, a teenage street gang who work for a local mob boss.  The leader of The Vipers is an older guy named Vinnie Benedetti, who is dating a girl named Sally who is much too young for him.  I know that Vinnie is meant to be a high school kid, but he looks like he's in his early 20's and Sally looks like she's about 13 or 14 at the oldest.  It's creepy as hell, but thankfully, there are no scenes between the two that cross any lines.  Vinnie is played by A.J. Damato, and his only credit on IMDB is this film.  Sally is played by Rebecca Herbst, who went on to have a very successful television career, including a 25 year run on General Hospital that began in 1997 and continues to this day.  All of these characters are cheesy in the best ways, but the mob boss was the one that really knocked my socks off.
The opening credits included actress Meg Foster.  She played Evil Lyn in the Masters Of The Universe live-action movie, and she's had dozens of roles in action and horror flicks from the late 70's to today.  However, I know her best as Holly Thompson, the woman with the ice blue eyes who works at the local news station that Roddy Piper takes as a hostage in one of my favorite movies of all time, They Live.  In Shrunken Heads, she plays The Vipers mafia boss, Big Moe, and if I saw this movie without any credits, I wouldn't have guessed this was her if you gave me a thousand tries.  See for yourself:

Big Moe is one of the most entertaining characters I've seen in a long time.  She may be the most outrageous and over-the-top portrayal of a mafioso that I've ever seen, and that's covering a hell of a lot of ground.  Incidentally, I'm not misgendering the character.  Big Moe is referred to as a woman in the film, despite the fact that she plays the character using a male voice and with clothing and mannerisms that do not at all suggest that Big Moe is a woman. 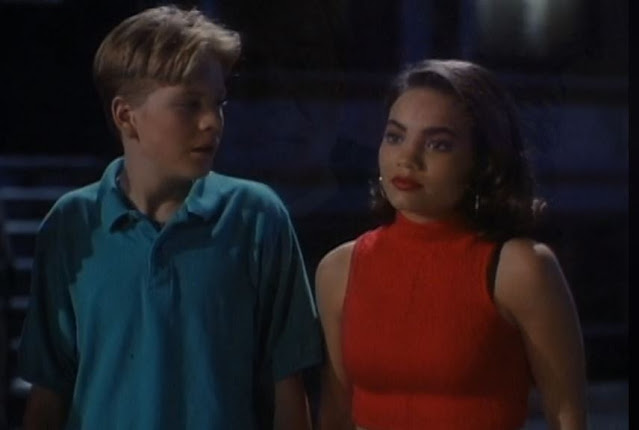 After witnessing Vinnie bully the three boys on the street, Sally grows disgusted with her boyfriend and breaks things off with him.  Later that night, she confesses to Tommy that she always liked him.  The two become a couple, but their relationship doesn't last long. 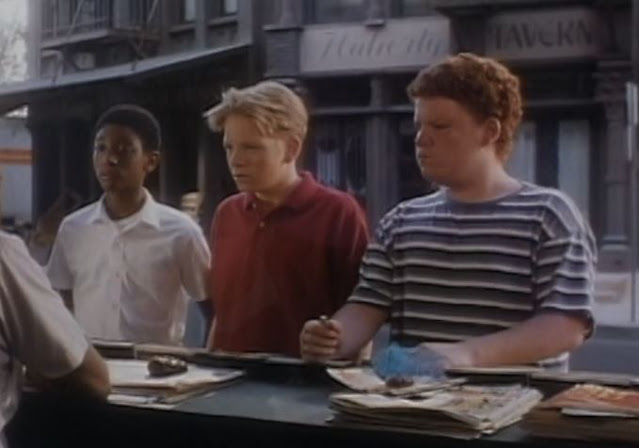 Tommy made a lot of poor choices in the first act of this film.  First, he gets the bright idea for he and his friends to film a video of the gang committing a robbery, and then they rat the gang members out to the police right in front of them.  Seriously guys, you couldn't have just dropped by the police station later instead of showing the tape to the cops while the gang stands there watching you do it?
The gang makes bail and captures our three heroes to bring them in front of Big Moe.  She threatens them to never interfere in her business again, but she's willing to let bygones be bygones... that is until Tommy decides that it'd be a good idea to mouth off to her while they're kidnapped at their hideout and surrounded on all sides by armed criminals. 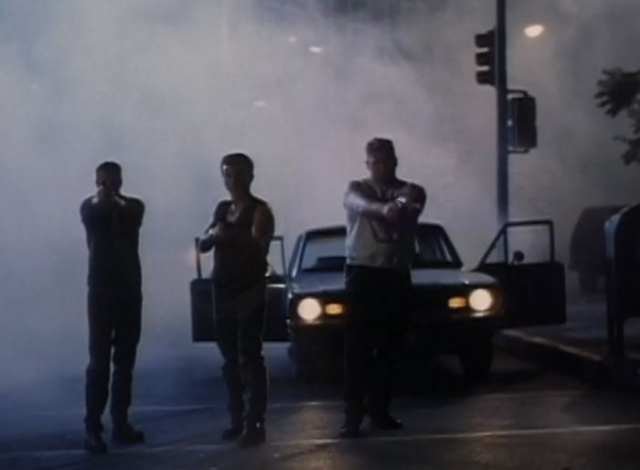 Big Moe decides to lock them up in a back room until she can think of what to do with them.  The three boys manage to find a way to escape, but Tommy again decides to take a bad situation and make it worse by stealing a couple of bags of betting slips, which finally exhausts Big Moe's patience and she orders a hit which Vinnie and The Vipers carry out.

After the wake, Mr. Sumatra breaks into the funeral home and saws each of the boys heads off.  He must have figured that the people responsible for loading the caskets onto the hearse wouldn't notice that they'd be burying three headless corpses, and he would have been correct because the subject is never brought up.
He brings the heads back to his condo where they are boiled in a cauldron and otherwise prepared to be turned into shrunken heads... but these aren't just any old shrunken heads... 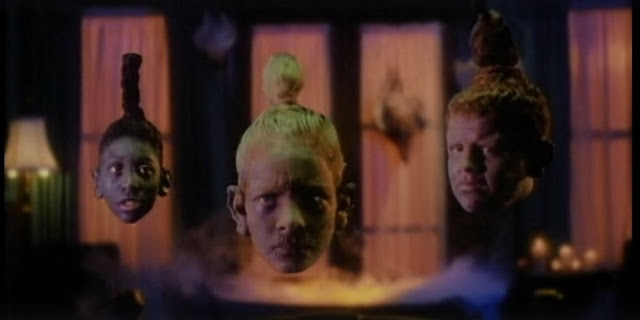 ...they're flying shrunken heads!  Before you think that the wackiness stops there, you should probably know that each of the boys flying shrunken heads has a different mystical power.  Tommy shoots lightning out of his forehead that has the power to incapacitate its target, or to project his memories directly into their brain.  Billy now has vampire teeth which he uses to bite and suck the blood from his enemies.  Finally, Freddie can produce a full-sized switchblade knife which he grips in his teeth.  I'm not sure if he's regurgitating this thing or if the knife materializes out of thin air.  None of his victims thought to ask these questions when they saw a flying shrunken head with a knife in his mouth hurtling toward them.
So, the boys fly through the streets of New York City to fight crime by zapping, biting, and stabbing the bad guys.  However, instead of killing the criminals outright, the shrunken head attack causes their victims to turn into zombies... but these aren't just any old zombies... 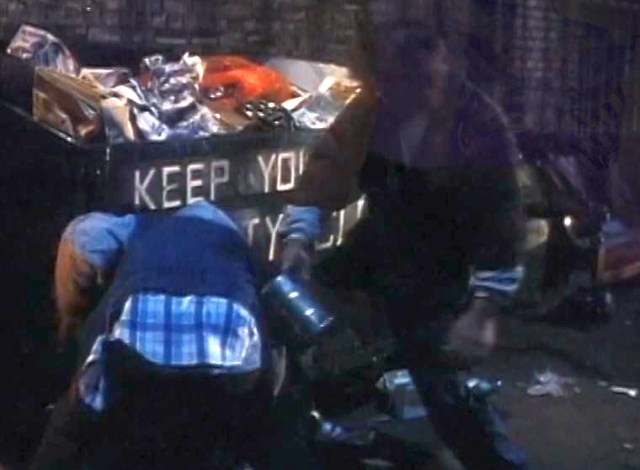 ...they're community service zombies!  A news broadcast that Sally is listening to in her apartment sheds more light on the fate of those who the shrunken heads have sought their vengeance on. 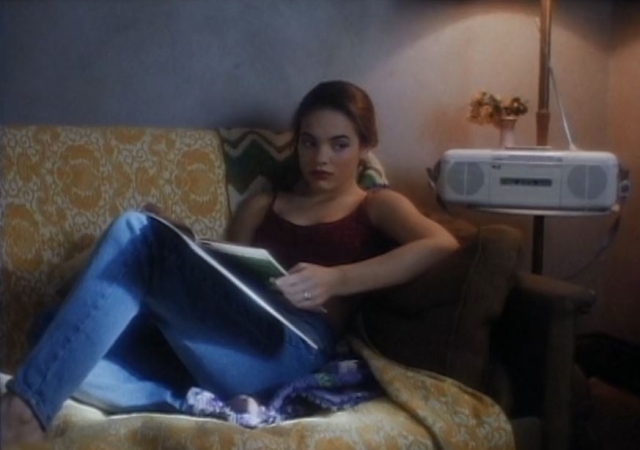 "A new and frightening disease seems to be attacking local criminals throughout the city.  The mystery illness is characterized by a peculiar shuffling gait, a total loss of bowel control, and a compulsion to pick up litter and clean graffiti.  Victims exhibited an alarming drop in blood pressure, making it impossible to locate pulse or respiration... what doctors call a pseudo-walking death.  Officials from the Center of Disease Control urge the public not to panic... unless they have criminal records." 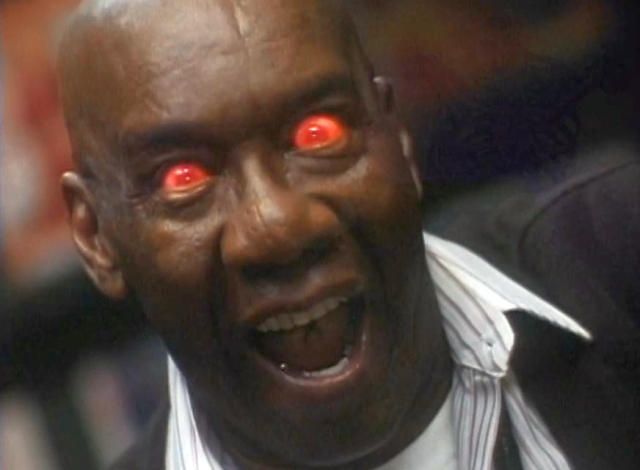 Mr. Sumatra continues to guide his shrunken heads to rid the city of its criminal element.  They are eventually aided by Sally, who shows Mr. Sumatra that Tommy's spirit is still alive by... unbuttoning her top and letting his shrunken head fly over and snuggle up to her bra, all set to a romantic score by Danny Elfman.
The creeper vibes do not end there.  While Mr. Sumatra is preparing his mission to make Vinnie and Big Moe face "capital punishment - Haitian style", he asks Sally if she is a virgin.  Since getting to first base with a flying shrunken head that shoots lightning doesn't count, she confirms that she is, but Mr. Sumatra can't let it go at that.  He's got to drive the point home by telling her that "only a female who has never had a male member inside of her body can complete this particular spell".  You are one smooth talker, Mr. Sumatra.
The much older man then asks Sally to go into his bedroom to put on a gown that's hanging in his closet.  The reason why he has a white dress that's small enough to fit a 14 year old girl in his closet is not discussed, and I'm good with that. 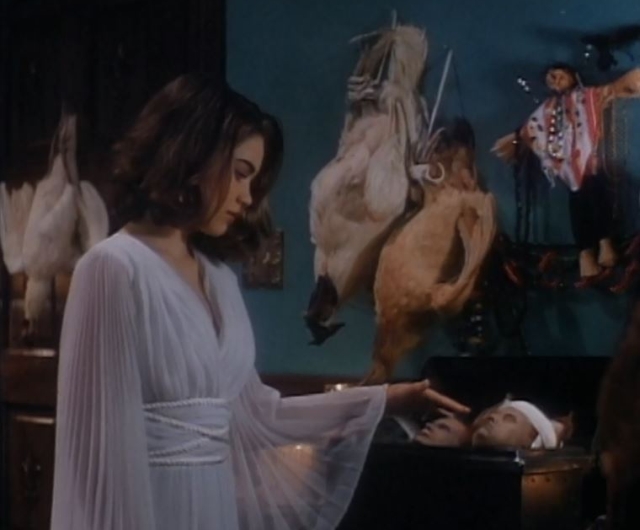 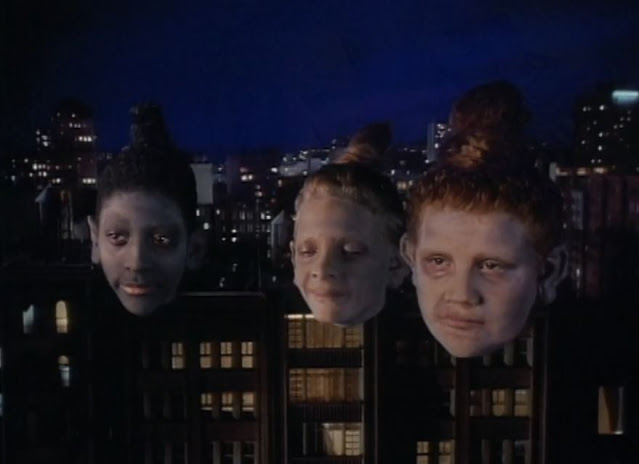 Despite the fact that he has given her every reason to believe that he's a predator, she trusts him and does as he asks.  Thankfully, he is not grooming this girl for anything sexual.  He's grooming her to become a voodoo priestess and the new master of the shrunken heads.  He also shows her how to cast a spell on Vinnie and Big Moe to take vengeance on them for the murder of Tommy, Billy and Freddy, which she does... and they all lived happily ever after.
So, what did I think of this film?  I think William Shatner put it best.
I give it five out of five shrunken heads.  If you enjoy movies like Tammy And The T-Rex, you'll love Shrunken Heads.  Check it out!