The Ghost Of Voo Dew Past 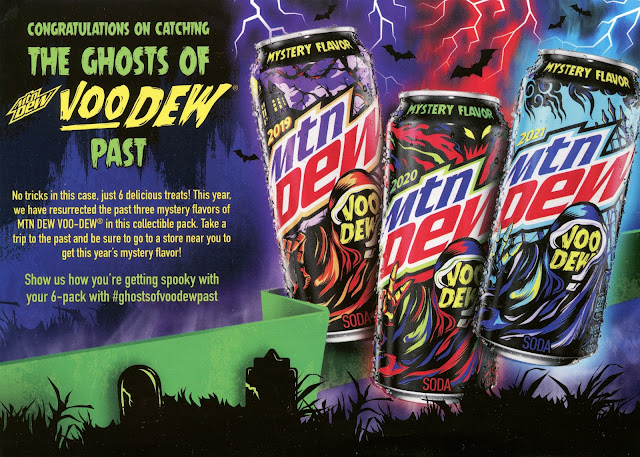 The Ghosts Of Voo Dew Past
Mountain Dew (2022)
Last month, I tried the new Mountain Dew Voo Dew 4, which had a flavor that tasted to me like a raspberry lemonade mixed with grapefruit soda.  In my review, I mentioned that it's difficult to compare it to the Voo Dew flavors that were released over the past three years since there's no way to try all four flavors at the same time to give an accurate comparison.  Perhaps the spirit of the Mountain Dew Reaper has heard me because on October 18th, they announced that a six pack that includes each of the previous versions of Voo Dew would be made available to purchase through their web store.
This was a deal that I couldn't pass up, and I'm happy to say that they've arrived just in time for a Halloween taste test. 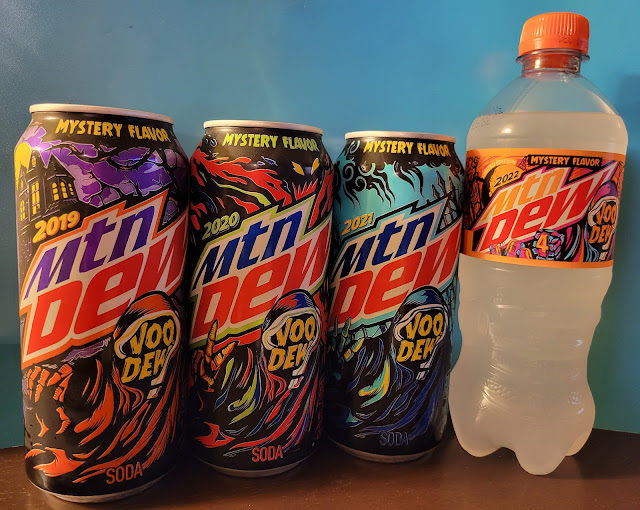 In my previous reviews of these flavors, I thought that the 2019 version tasted like a Creamsicle mixed with Fruit Loops, the 2020 version tasted like Tropical Skittles, the 2021 version tasted like Yipe Stripe Fruit Stripe Gum mixed with a tart citrus flavor, and this year's version was like raspberry lemonade mixed with grapefruit soda.  I was reasonably sure that these were four distinct flavors and that they weren't just putting out the same exact flavor every year and letting my mind play tricks on me.  The fact that they put them all out at the same time confirms that they are definitely different from one another.

It's difficult to tell from the photo, but each of the version of Voo Dew have a slightly different color.  It's subtle, but it's there.  The flavor differences are not subtle, but they're also hard to describe.  If you think that's a cop out, see if you can find the words to describe the flavor of cola to someone who has never tried it.  Once you realize that the words "fizzy" and "sweet" can be applied to every carbonated soft drink, it becomes a pretty challenging task to put the flavor into words.
Now that I've had an opportunity to try them back-to-back, I'd like to revise my description of each of the flavors:
They're all pretty good, but my favorite one is still Voo Dew 2.  Next would probably be the current one because I tend to like grapefruit soda, followed by the first Voo Doo, and then Voo Dew 3.  It's not that I think the 2021 version is bad; I'm just not a big blue raspberry fan so I enjoyed the other ones more.  Truth be told, I'd probably get sick of all four of them pretty quickly if they were available all year, so they make a perfect limited edition product to come out every year for spooky season.