You Are The Navigator 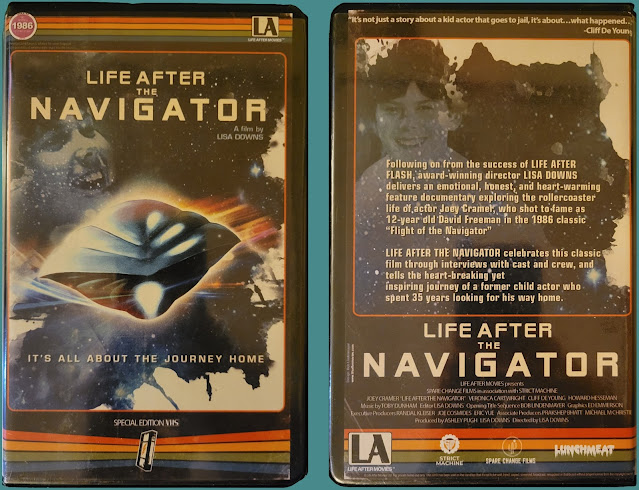 Life After The Navigator
Life After Movies (2020)
One of my favorite family films of all time is the 1986 Disney film Flight Of The Navigator.  It's a movie that I saw for the first time when my grandfather recorded it off tv when it aired as the Disney Sunday Night Movie on ABC.
When they aired Flight Of The Navigator on television, they split it up into two parts.  The first half of the movie aired on Sunday, January 3rd, 1988 with the second half not being shown until January 10th, so I had to wait a week after seeing the first half of the movie before I could find out how it ended.  I can't even begin to guess how many times I watched that tape in the years that followed, but it was a heck of a lot.  In the years since, it has become one of my comfort movies that I'll put on any time I want to relax and just let my mind escape for a little while.  I even had the film score by Alan Silvestri on my iPod throughout college.  It was a part of my study playlist that I'd listen to any time that I wanted to block out the outside world and focus.

We found a tape of a documentary about the film and its star, Joey Cramer, for sale by Lunchmeat at their merch table in the concession building at the drive-in over the weekend.  It seemed only fitting to watch a documentary about a movie that I fell in love with on VHS on the same format, so we bought one.

I had heard that Joey Cramer was arrested after a bank robbery at some point, but I didn't know any of the details.  The dude had a pretty rough life and has definitely made some big mistakes, but this documentary did a fantastic job of showing him as a real human being who has worked very hard to turn things around and is more than deserving to move forward and live a happy life.  Even if you're not as big of a fan of Flight Of The Navigator as I am, Life After The Navigator is an insightful film about the life of a child star after they've grown up.  It's available to stream free on Tubi.