When It's Time, You'll Smell It

Bones And All
MGM Pictures (2022)
This is an incredible movie and one of the most interesting love story that I've watched in a long time.  I'm about the furthest thing from a film expert as you're ever going to find at a movie theater, but it wouldn't surprise me too much to see this movie being discussed during awards season. 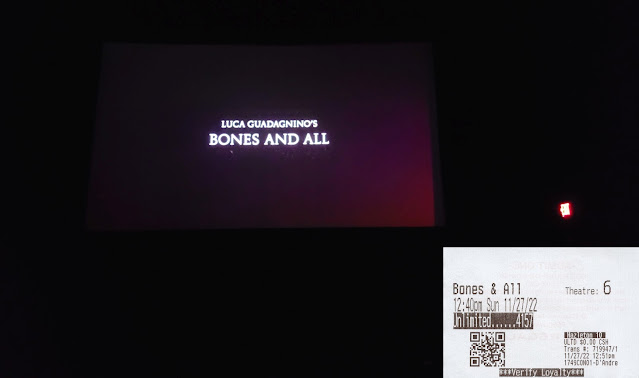 The story is set in the late 80's and it follows an 18 year old girl named Maren who has a genetic condition that causes her to commit cannibalism.  The movie does a good job by not bogging down the script by trying to explain this condition.  We are only given hints along with the film's protagonist as she discovers who she is and where she came from throughout the film.  She discovers others who are like herself, including an old man named Sully who sees himself as her mentor, and a boy who is about her age named Lee who she falls in love with.  Their romance reminded me of Mickey and Mallory Knox from Natural Born Killers, but despite the brutality of their actions, Maren and Lee are far more level-headed.  The movie makes you fear them and fear for them, while at the same time inspiring you to root for them to find happiness.
I don't want to say too much more so I don't risk spoiling anything, but if you're not overly squeamish, I highly recommend Bones And All.