It's Not Called A Finger Cracker 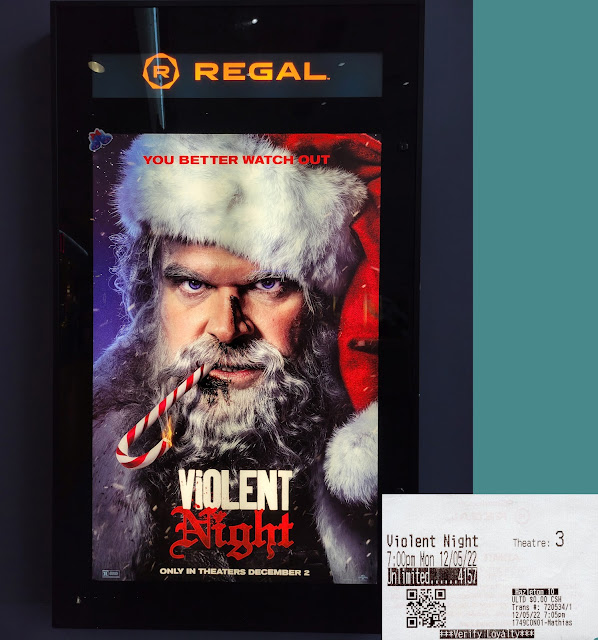 Violent Night
Universal Pictures (2022)
It's going to be difficult to share my thoughts on this movie without spoiling it, so be forewarned that this might cross over into mild spoiler territory.
The poster may lead you to believe that Violent Night is a holiday horror flick like Silent Night Deadly Night, but it's not.  It's a Christmas action-comedy that feels like it's combining the concept of Home Alone, The Three Stooges, and Beatrix Kiddo from Kill Bill.  It's overflowing with blood and gore that's delivered in a way to make you laugh your ass off while you root for the character who's dishing out the punishment, but it balances this out with moments of heartwarming sincerity that remind you that you're watching a Christmas movie.  It's an impressive balancing act that it somehow pulls off.
Violent Night is about a gang of criminals who invade the mansion home of an obnoxious millionaire on the night of Christmas Eve and terrorize her and her family in order to steal $300 million dollars.  Unfortunately for the criminals, the millionaire's young granddaughter is on Santa's nice list, and Jolly Old Saint Nick is ready to tap into the skills of his previous job before he became the spirit of Christmas in order to keep her safe.
There's a scene about halfway through the movie that immediately stood out to me as the core idea that the rest of the film was built around.  That idea is: what if you made a movie that showed how brutally violent the traps in Home Alone really were.  I don't want to say too much more at the risk of spoilers, but you'll know this scene when you see it.  It's an interesting concept because when you think about it, some of the things that Kevin McCallister does to Harry and Marv probably would have killed them, or at very least put them in the ICU for a while.  They definitely wouldn't have brushed it off the way that they did in the movie.  Violent Night presents a more realistic view of this, and it does so in a way that is very gratifying.
For as campy as the concept here is, the performances are all very good.  David Harbour (Police Chief Jim Hopper from Stranger Things) and John Leguizamo are equally brilliant as Santa Claus and the Christmas-hating "Mr. Scrooge" who is the leader of the home invasion.  Beverly D'Angelo (Mrs. Griswold from National Lampoon's Christmas Vacation) is perfect as a cold-hearted millionaire and matriarch of the Lightstone family, and Leah Brady knocks it out of the park as her granddaughter, Trudy, who Santa is protecting throughout the film.  Her gleeful expression of "Skullcrusher!" near the end of the film made me laugh to the point of losing my breath.  Finally, there is one member of the home invasion gang named Krampus that steals every scene that he's in.  He's played by Brendan Fletcher.  I'm not too familiar with his work, but he's definitely memorable in this film.
Violent Night is absolutely going to become a Christmas tradition for me (probably in a double feature with Die Hard), and I strongly recommend that you give it a shot while it's in theaters this holiday season.