Blessed Are The Cheesemakers 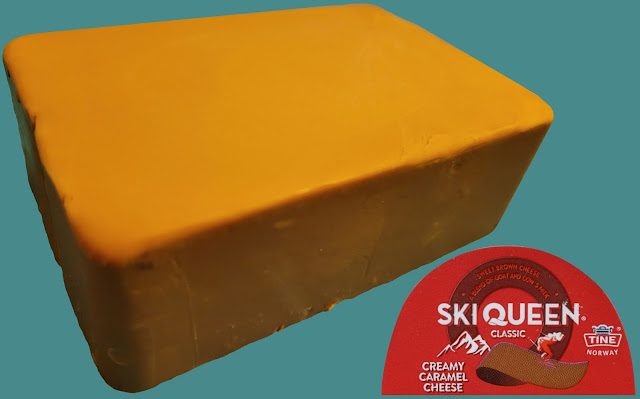 Ski Queen Classic Cheese
Tine (2022)
I found this at Wegmans not long ago and it's one of the most delicious cheeses that I've ever had.  It's a type of Norwegian cheese called brunost (brown cheese).  It's made by separating whey from curd.  The whey is then boiled and blended with cow and goats milk.  The mixture is then boiled a second time to dissolve the sugars and caramelize the cheese, which is then cooled in a way to prevent sugar crystals develop slowly and don't become too large... or at least that's what their website says.  I may be cheesy but I'm not a dairy farmer, so I'm going to go ahead and take their word for it.
This cheese has a texture similar to fudge, and it has a sweet and smokey caramel flavor.  It's not sweet to the point where it tastes like a caramel candy but it's a very strong flavor.  The flavor is probably going to be overpowering if you use too much of it as a topping, but it's incredible when used in small amounts.  The only difficulty I ran into is when I melted some to spread on a bagel (it's too thick to spread on its own).  It burned a bit, but it spread reasonably well when heated and it was absolutely delicious.  Highly recommended.