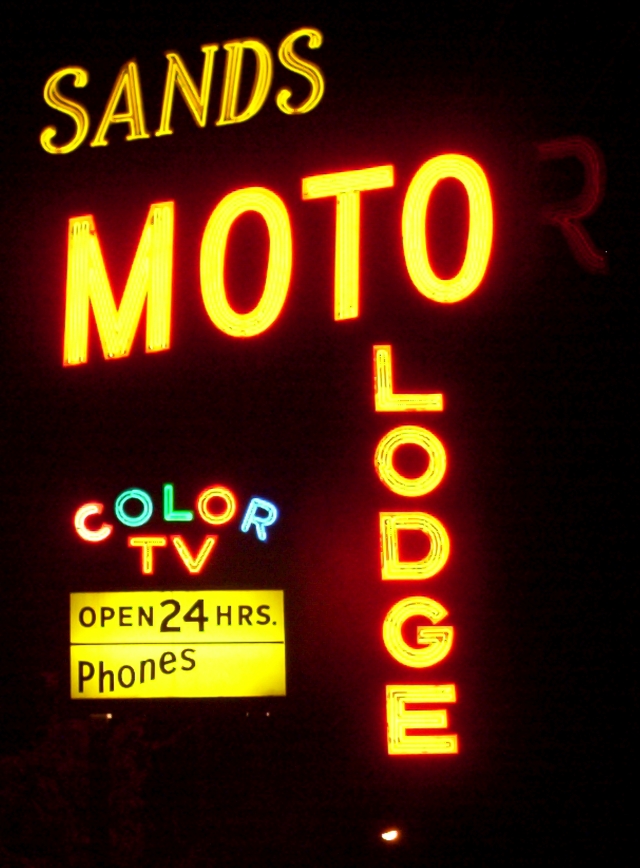 Sands Motor Lodge
Route 35 - Eatontown, NJ
We decided to wing it and not book a hotel room ahead of time for our New Jersey adventure this past weekend.  While we were driving around looking for a place to eat, we passed this motel that looks like it hadn't been remodeled since the 1950's and decided that it might be an interesting place to stay. 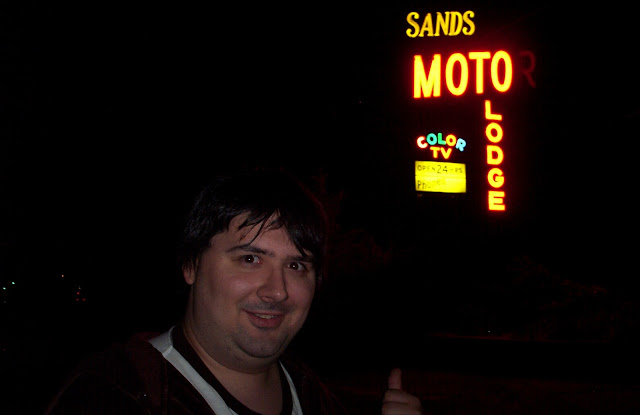 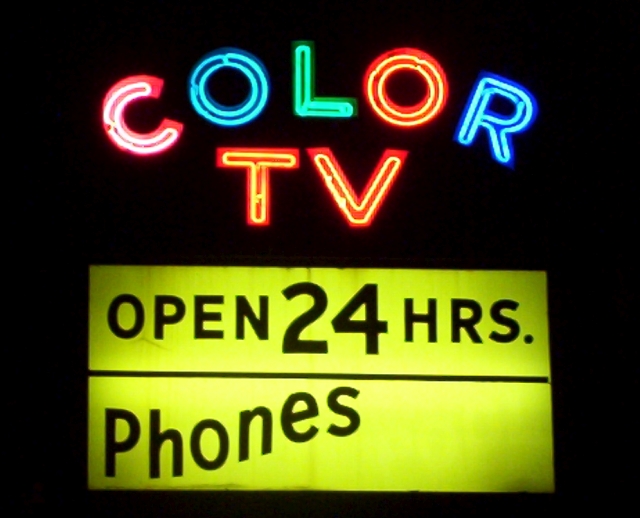 Man, they have color television and phones?  I don't know if I can stand this level of luxury!  And, lucky us, the motel is open 24 hours, as opposed to all of those places that close at 9 pm and lock everyone inside for the night.  Alright, Sands Motor Lodge, you sold me.  I'd like a room, please. 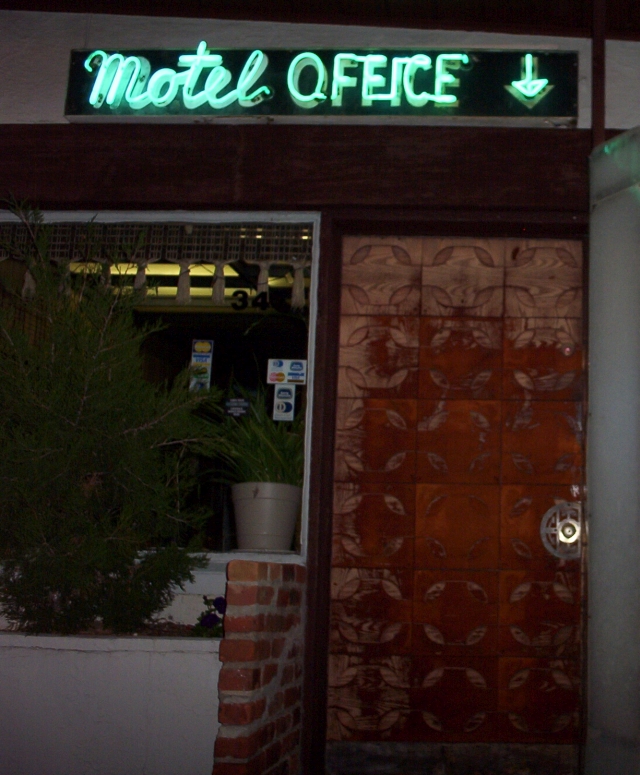 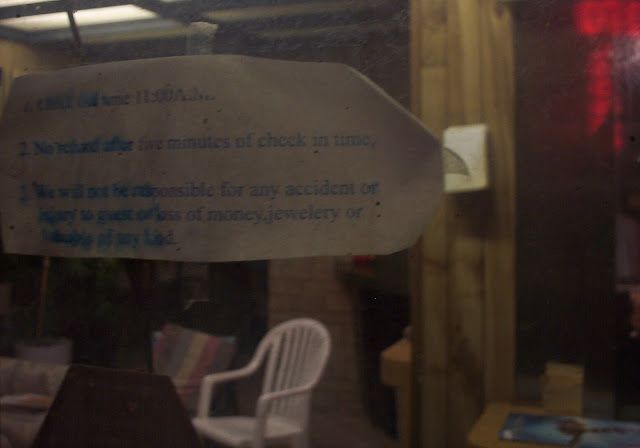 The first warning sign that this motel might not be all that I hoped it would be was taped to the window to the office where you check in.  I'm not talking about the fact that it looks like a ransom note; I'm talking about the second item on this list.  You know, the one that says that they won't grant anyone a refund after five minutes of the check-in time.
Hmmm... that's peculiar.  What kind of motel would have received so many refund requests that they had to put a five minute time limit on it?  I suppose they could be a few men who, um, finished their business quickly and decided they could hit the road without having to pay for the room, but that doesn't necessarily mean that it's not clean, right?  Right?! 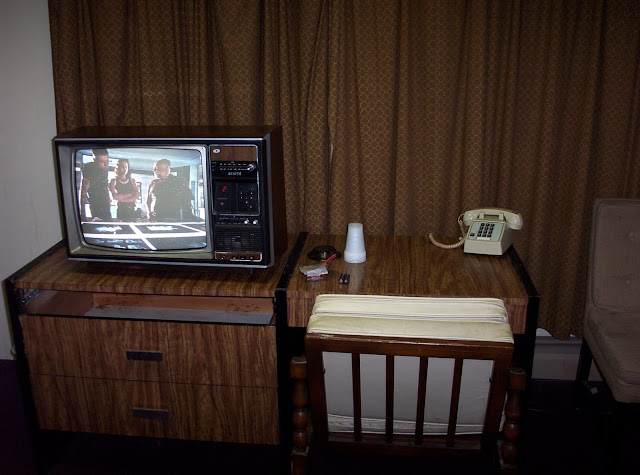 Let's see what we have here.  There's a dresser and a pull-out cot in case you need an extra bed.  Ok, not fancy, but it's a cheap motel, so it's fine.  There's a stack of plastic cups - no problems there.  And hey, there's the promised phone and color television!  It's a small Zenith set from the late 70's or early 80's.  Not exactly something I'd choose to promote with a neon sign, but it works.
So far, so good.  Might as well get undressed and put my clothes in the dresser. 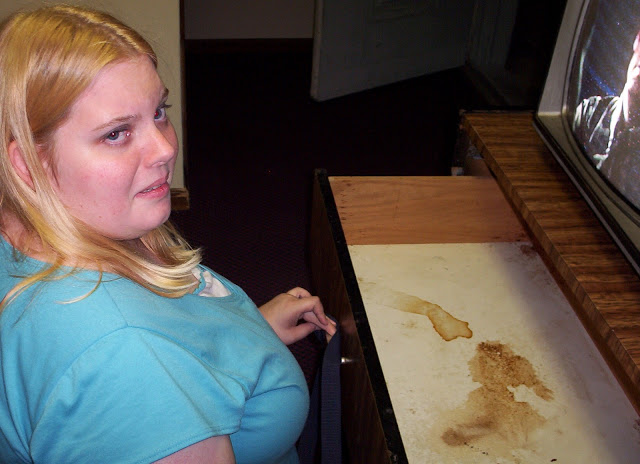 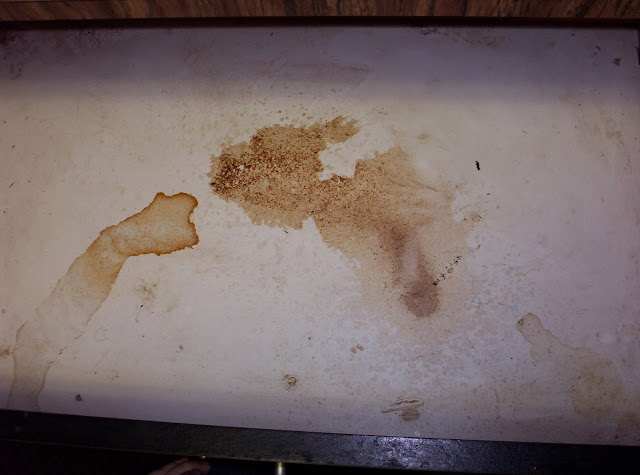 Um... maybe not.
I'm not quite sure what could be responsible for these disturbing stains and textures, but I don't think I want to know.  But hey, it's just a dirty drawer, right?  I can just fold up my shirt and pants and set them on the chair. 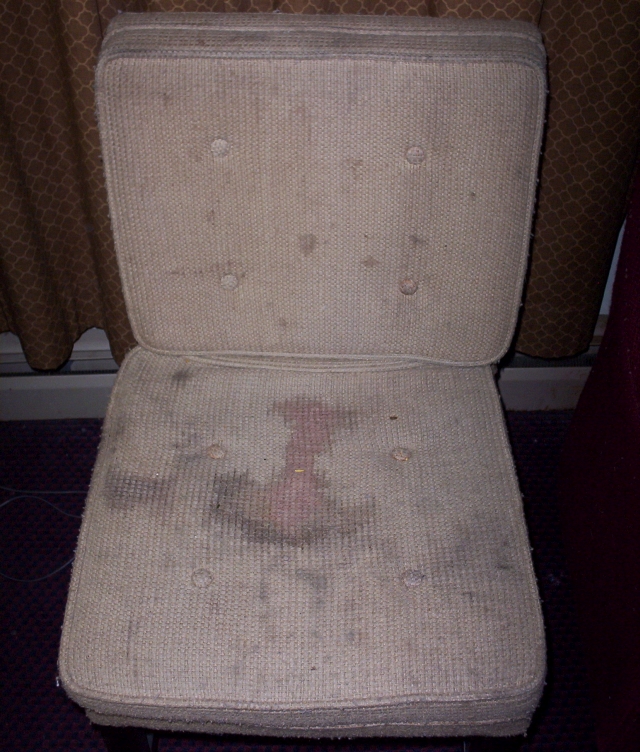 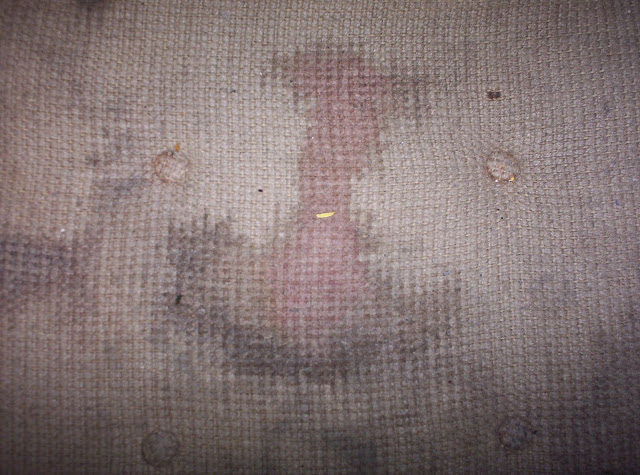 On second thought, that might not be the best idea either.
I may not know what caused the disgusting discoloration in the drawer, but it doesn't take a detective to make a good guess on what caused the one on the drawer.  Alright, clearly this room has some concerns, and I only have five minutes to decide if we're going to stay before I can no longer get my money back.  I better turn on the lights and get a better look. 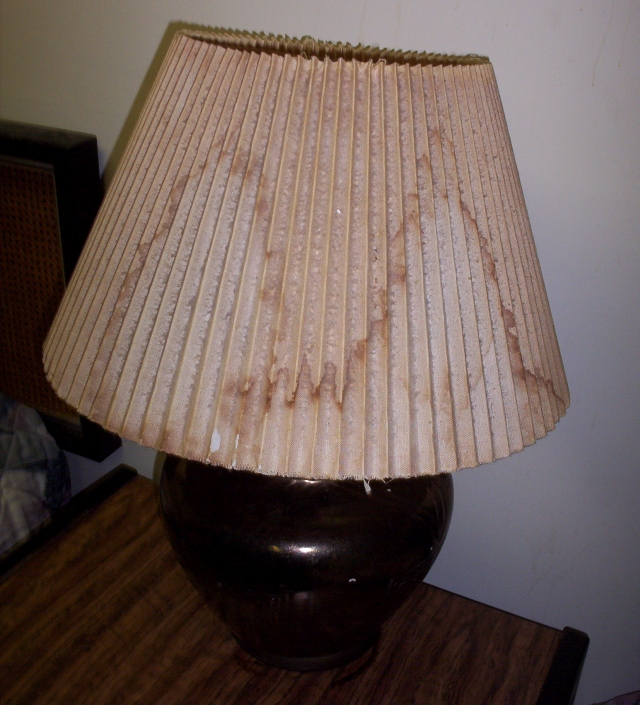 Seriously?  Come on!  What could have possibly caused this kind of stain on a lampshade?  Was there a murder here where the body was propped up on the lamp? 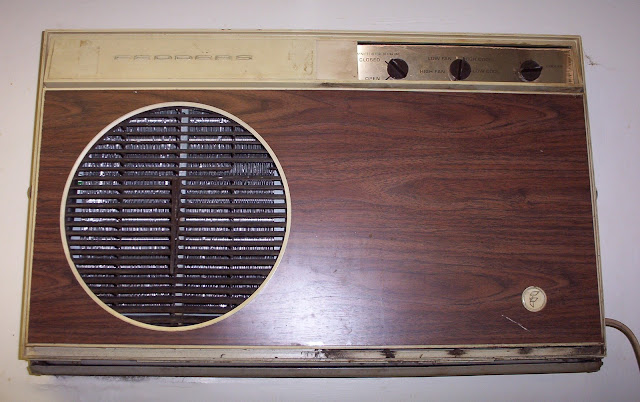 Perhaps it's water damage from the air conditioner.  I can't say that I've ever heard of Fedders before.  Maybe they make a great air conditioner, but this woodgrain model looks to be older than I am, and the black stains aren't really filling me with confidence.  What they might be filling the air with is anybody's guess. 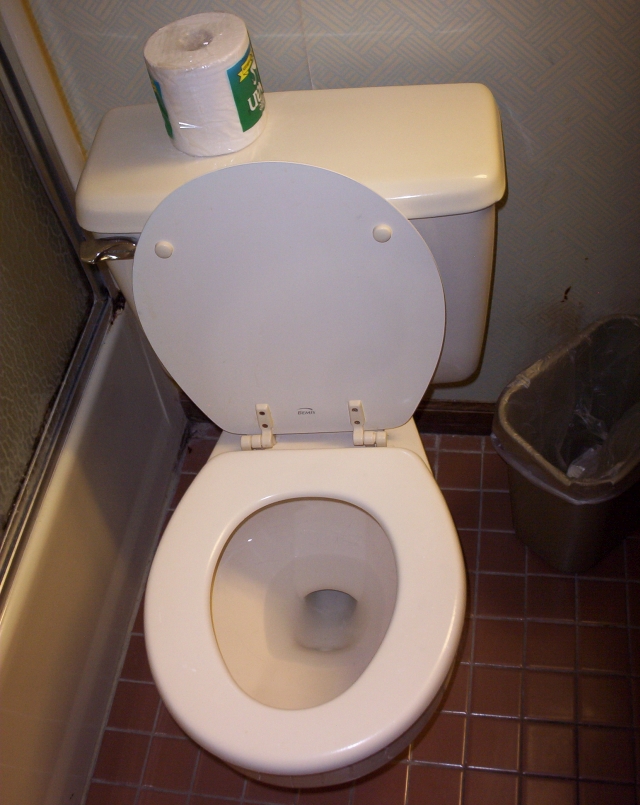 Strangely enough, the toilet was in reasonably good shape.  In fact, the bathroom was by far the cleanest part of the hotel.  Don't get me wrong - they're not winning any housekeeping prizes in here either, but compared to the rest of the room, the bathroom is a palace. 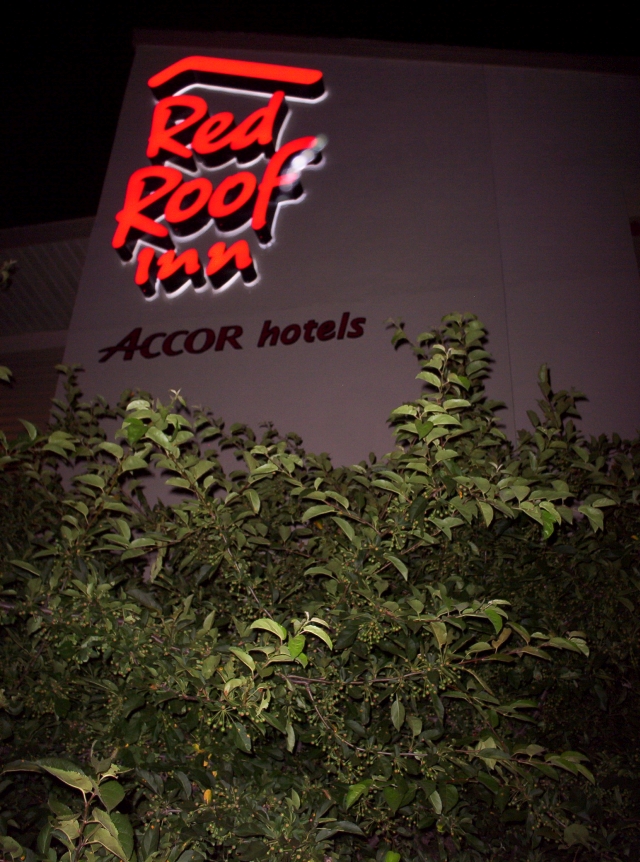 Thankfully, we were within our five minute window, so we were able to leave with a full refund and stay at a nearby Red Roof Inn that didn't look quite so much like a murder had taken place in the room.